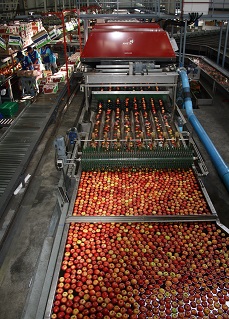 Apples are regarded as a trendy and exotic fruit in Vietnam, and South African exporters have seen an increase in interest.

This year apple exports to Vietnam were up by 380,000 cartons (12.5kg) YTD week 24, a +263% increase compared to last year (after a few teething problems in switching over to electronic phytosanitary certificates).

“We are excited about this market and look forward to continued growth,” he says.

A very large apple harvest this season accounts for the rises in exports to Africa (+40%), Europe (+43%), the UK (+36%) and the Indian Ocean islands (+27%) up to week 24, but, cautions Jacques du Preez, trade and markets manager for Hortgro, weekly shipping figures can be misleading due to shipping delays.

“In general the prospects for the apple export season are looking positive,” he notes. “Industry is expecting total volumes to increase by 9% - a record harvest of 39.9 million 12.5kg cartons. It is ascribed to favourable weather conditions during 2020 as well as many new plantings over the past few years, now coming into bearing age.”

He adds that a cooler summer aided colour development, which in turns boosts packout percentages.

Shipping disrupts trade with Bangladesh
Trade with Bangladesh, third largest apple importer in the world and an important market especially for green apples, has been frustrating: a Villiersdorp apple grower says his apples that were packed for Bangladesh in week 9 and shipped in week 11, have only just arrived there, after almost fifteen weeks on the water.

Trading with Bangladesh has been exacerbated by some shipping lines avoiding the port of Chittagong as a result of port congestion and long turnaround times.


“We have recently seen a significant increase in freight costs and port issues which are concerning as Bangladesh is one of Tru-Cape’s largest importers in the East. We are looking at nearly 500,000 equivalent cartons thus far and, in a normal season, this can increase to around 800,000 cartons a year,” Pienaar says.