Australian carrot exports surge to be worth $100m during pandemic

While exports of fresh vegetables were down overall in 2020, carrot exports increased in both volume and value. Last year, Australian carrot exports rose more than 7 per cent, becoming a $100 million industry.

Incoming AUSVEG chief executive Michael Coote: "With hospitality and the food service sector shutting down in Australia as a result of the pandemic, the exact same situation was happening in export markets. Restaurants, cafes, hotels, bars and pubs were all shut down and people were eating from home.  So retail demand went up considerably in a lot of countries, as it did here … and carrots, as a staple vegetable that we use in the majority of the dinners, did too. The same thing was happening in Singapore, Hong Kong and all of our major markets."

Coote said more than 110,000 tons of carrots were exported last year with the majority sent to Asia and the Middle East. He added that Western Australia accounted for 85 per cent of carrot exports. 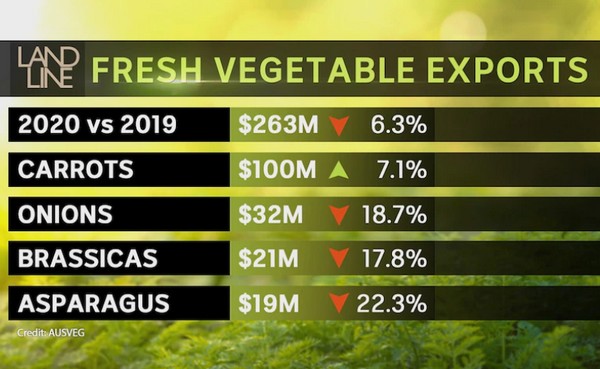 "Carrot exports have continued to grow, especially in the past couple of years," Mr Coote told abc.net.au. "Breaching that $100 million mark and getting over 110,000 tons of carrots out of Australia during challenging times and onto plates of international customers is a fantastic effort."