The last Dutch Sweet Sensation pears of the season were sold at the end of March. The Greenery Growers top fruit team and growers recently had an online meeting. They reflected on another successful season.

Results
Both Sweet Sensation and Sweet Dored have built a solid client base in recent years. This season, all the previous years' retail customers once again included these pears on their shelves. That's mainly because of the pears' flavor. This again scored higher than all other red pear varieties in a taste test.

This client base has also been broadened. The aim is volume growth with retail customers in various European countries. Sales volumes rose sharply, particularly in the Netherlands. The pear was available at supermarkets like PLUS, Albert Heijn, and Jumbo. 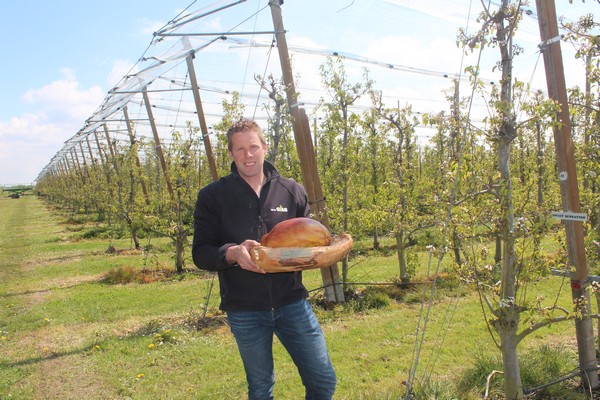 This season's gross average price was €1.16/kg. Last season that was €1.17. That means Sweet Sensation has once again broken away from the existing market mechanism. Since its introduction, Sweet Sensation pears' average price has hardly been seasonally dependent. Free varieties prices, however, have fluctuated far more.

This shows that concept varieties are a welcome addition to the more common segment. These varieties must be combined with a well-thought-out marketing campaign and the correct sales strategy. Sweet Doreds had a good year too. This season, they sold at a gross average price of  €0.98/kg vs. €0.97 last season.

Ton van Wiggen is the Sweet Sensation sales manager. He says, "We're delighted that this was another successful season. That's for our growers as well as buyers. The pack-out is improving annually. That's thanks to our growers and packaging stations' many efforts. Our customers are also saying that Sweet Sensation's flavor and quality are rock solid. That contributes to the stable payout prices we've been able to achieve in recent years."

This year's winner is ...
Every year, a grower receives the Sweet Sensation floating trophy. That's for the season's highest average price. This year, the honor goes to Anton van Gils. He achieved a pack-out of 91.66% Class I quality. Fellow growers Kees Pouwer and Toon Vernooij were in second place. Their pack-out percentage was 89.23%. Ton van Wiggen personally awarded the prize to the winner last week.

“We harvested 50 tons from one hectare last season," says Anton. "And then also had the highest pack-out and best average price. That makes you feel good and gives you an energy boost. You want to do everything to deliver a good product again next season."

Marketing
Last season, a creative marketing activities mix supported Sweet Sensation again. COVID-19 prevented in-store tastings from being held. But The Greenery Growers cooperate well with their clients. So, they could do social media activities. And they did shop floor promotions where possible. There were also several targeted pamphlet campaigns. They could, therefore, again attract many shoppers' attention to this pear. They improved the sales figures with most buyers as well.

Trees available
The demand for Sweet Sensation is increasing. So, The Greenery is looking for growers who want to plant this variety. “There's a rising interest in planting Sweet Sensation. That's because growers are sharing information about their improving cultivation knowledge. And because the results are good, financially," concludes Rob van der Weele, Sweet Sensation's product manager.

For more information or interest in trees:
Marc Schoenmakers
The Greenery
newsensations@thegreenery.com