"Regionality increasingly spreads to southern Germany, and soon to the whole of Germany"

In Nuremberg's Knoblauchsland, the harvest of greenhouse crops is in full swing. Tons of tomatoes, cucumbers and co. are brought to market every week. "The harvest as well as the marketing are developing more or less according to plan," says Peter Völkel, owner of the vegetable farm of the same name, which markets its tomatoes and (mini) cucumbers both through Franken Gemüse and on its own.

The farm's first regular and TOV tomatoes were harvested recently. "The tomatoes are usually planted in weeks 3 and 4, which is why they are ready for harvest about 12-13 weeks later. We put this year's first batches on the market in week 15 - about similar to last year."

Today, the Völkel family operates protected cultivation in the heart of garlic country on a total of 24,500 square meters. "We currently harvest about 15 to 20 tons of mini cucumbers each week, plus between 10 and 15 tons of tomatoes."

Cucumber prices at last year's level
The cucumber harvest, on the other hand, is starting almost two months earlier. Völkel: "At the end of February, we were able to harvest the first mini-cucumbers of this year's season. In terms of prices, this year's cucumbers are roughly at last year's level," observes the grower. German produce is still in hot demand among consumers, he says. "Regionality, however, was more focused on Bavaria until about 5-6 years ago. But the farms have all grown, which is why regionality is now expanding more to southern Germany and, in the next few years, to all of Germany." 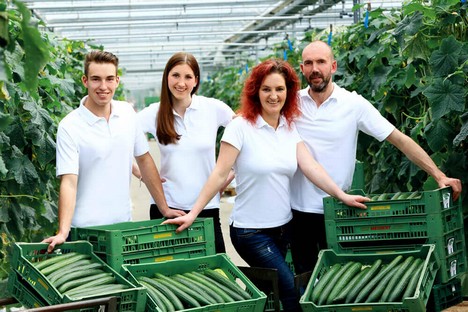 The Völkel family of growers

CO2 tax
Despite the ongoing Corona issue and the overarching challenges in greenhouse growing, Völkel is optimistic about the future. "We are well positioned with our variety program in both crops. Clearly, the newly introduced CO2 tax is hitting us just like other growers. Vegetable prices are bound to rise in the next few years," he continues. "We still have sufficient stocks of fertilizers and packaging materials. At this point, it would have already been 20 percent more expensive." *

However, Völkel says the exact impact of the new regulation won't be felt until next year. "We have simply made it our business to implement the topic of sustainability into our everyday operations in a meaningful way. By acquiring a CHP unit, we can reduce electricity costs and feed in heat at the same time, accordingly using our facilities as effectively as possible."

An across-the-board farm conversion would also be an option for the market gardener. "Mini cucumbers form the basis of our business, but we would add new crops - such as cocktail tomatoes, peppers and eggplants - to the program and build new greenhouses as needed. That's why we're now looking for new space to expand our product variety."