Edward Vandamme helped from a young age on the family business in Woumen (Diksmuide) in Belgium. Since 2013 he has been in the company together with his two uncles Bart and Filip. In the meantime, wife Annelies has also taken that step. The company focuses on non-intensive arable vegetables for the industry. In addition to potatoes, also carrots, kohlrabi, yellow turnip and spinach. They grow green beans and onions for the fresh market. The storage capacity consists of 1.700 tons of potatoes, 700 tons of onions and 3.000 tons of carrots.

Storing potatoes is not new for the agriculture company Vandamme. They have extensive experience with Bintje in non-automated storage. Since 2015, they have been storing potatoes of the Fontane variety in a new potato storage with above-ground ducts. A mechanical cooling installation was also installed this year. According to Vandamme, mechanical cooling is an excellent basis for long-term storage of potatoes without loss of quality. In addition, cooling, in combination with 1,4SIGHT, is a suitable alternative to chlorpropham as a sprout inhibitor.

A day out with storage specialists
Also the onions are stored in their own storage for a few months after the harvest. After November they make way for carrots that remain in storage until January. However, this is difficult without cooling. That is why a Tolsma Vision Control storage computer was installed in 2017. “The storage of carrots appealed to us and an appointment with Peter de Waal and Arjan van Hassel van Tolsma was made in no time. They took us for a day to companies in the Netherlands that store carrots in boxes or in bulk. That day we learned a lot about carrot storage. Thanks to the pleasant cooperation and the trust that has been built up, the choice was quickly made. ” 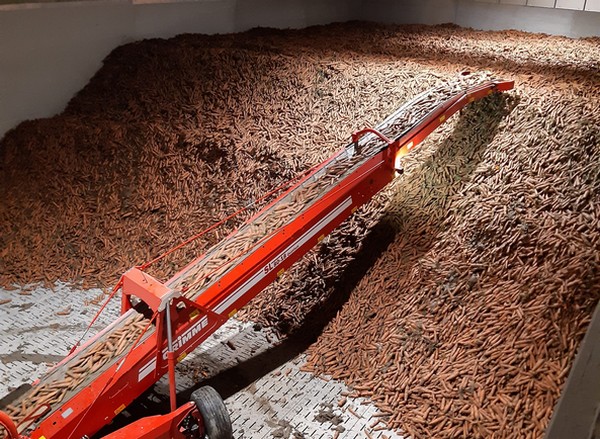 Two separate cells
In 2020 a new double shed was built for the storage of winter carrots. On the advice of Tolsma, two cells were chosen for bulk carrots. Edward himself came up with the idea of building a pressure passage between the two cells, using an ‘or-or’ system. With the same fans and air cooler, he can now cool cell 1 or cell 2. A pipe has also been installed to the potato shed. From the end of December it can also be cooled there. The natural refrigerant CO2-propane has been chosen. “The social trend towards more CO2 neutral production methods is growing. In any case, our installation is an investment for the future,” says Edward.