In the Spanish province of Huelva, the strawberry campaign has already recovered the usual production levels after a first half of the campaign with a drop of about 50% in the volume marketed. Storm Filomena, followed by periods of constant rain and cloudy days, caused not just a drop in the productivity, but also a significant reduction of the marketed volumes, as moisture issues took a toll on the quality of the fruit. 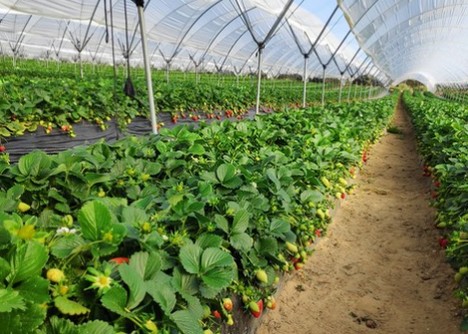 "Large volumes of strawberries have been sent to the processing industry, with the financial losses that this entails for the companies that have been unable to sell their fruit in the fresh market," says Rafael Dominguez, manager of the Association of Producers and Exporters of Strawberries from Huelva (Freshuelva). "Although strawberries are again available in the markets and the demand is acceptable, prices remain low. The fact is that large retail chains have pushed prices down, even at times when there was hardly any supply, and after that, it becomes very difficult for prices to rise again.

According to the manager of Freshuelva, we are now at the turning point of the campaign. The Easter holidays and the spike in the number of coronavirus cases in Germany and other central and northern European countries threaten to reduce the sales capacity.

"April is the month in which Huelva's strawberry production peaks and the fruit has the best Brix levels, color and flavor, as there are more hours of sunshine. We hope that the weather will be good these days, although the development of the pandemic in northern Europe is not encouraging. Germany, the main importer of Spanish strawberries, is on the verge of a new lockdown and is imposing tighter mobility restrictions; something that could affect us directly. For example, street markets, where many Germans shop when the weather conditions are good, could close. The situation is better in the British market, as vaccination levels are high in this country, so mobility and sales channels are being recovered. The United Kingdom is the third most important market for our strawberry exports."

The next two weeks will therefore be crucial for Huelva's exporters, since local fruit is expected to become available in the Netherlands, Belgium, Germany or France, among others, from the second half of April, so Spanish strawberries will lose market share.

Raspberries have also been affected by the bad weather, although to a lesser extent. Up until March 20, the production volumes have been around 25% lower, although according to Rafael Domínguez, prices have remained acceptable and without major fluctuations, with a stable demand in the markets.

However, the blueberry production is being notably greater this year, as the plantations set up in recent years are reaching full maturity. "This increase in the production in Huelva applies especially to the extra early varieties, which are allowing us to start the campaign in late December," says the representative of Freshuelva.

First strawberry shipments to Canada and blueberries to Brazil
Following the Spanish government's acceptance of the requirements established by Canada for the marketing of strawberries, the opening of the Canadian market to Spanish strawberries was confirmed in February. Shipments on a trial basis were already started this season by the company Frutas Borja, an associate of Freshuelva.

"The first shipments to Canada have already been made and we are waiting for the Canadian authorities to give us their feedback to ensure that the established protocols have been met and that exports can further develop. We will soon publish the results of a consultation carried out by Extenda, the Andalusian Public Company for Foreign Promotion, on the particularities of the strawberry market in Canada, where Spanish strawberries will compete with US and Mexican strawberries."