Fruit and vegetable wholesalers are hoping that the impacts from the flooding in Northern New South Wales remain minimal to supply.

In what the NSW Premier Gladys Berejiklian labelled as a "one-in-100-year event" for the Mid-North Coast, some towns have been evacuated and other regions are on standby to leave their homes as the situation continues to evolve.

Another area affected is to the West of Sydney, around the Richmond, Nepean and Hawkesbury Valley regions, where residents are also told to prepare to evacuate. While rainfall is starting to ease in most areas, 38 areas across the state have been declared natural disaster zones and the situation is still evolving, with some rivers rising and yet to reach their predicted peaks. 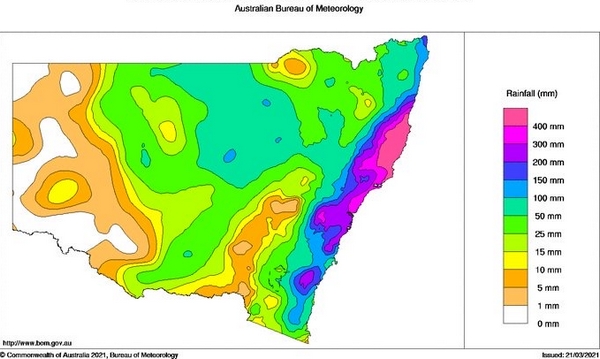 Photo: map showing the 6-day rainfall totals across NSW, up to 3am Monday. Some parts of the Mid-North Coast reached over 900mm (Source: BOM Twitter)

The mid-north coast produces the majority of Australia’s blueberry production, particularly around Coffs Harbour. But production is winding down, if not finished for most growers after the peak season, which runs from July to February. Berries Australia is asking growers who lost crops or infrastructure to contact the organisation's Industry Development Officer (IDO) to report any problems and is urging them to seek disaster relief if required.

In the monthly newsletter, Executive Director Rachel Mackenzie explained: “It is also important that government understands that the impacts of such weather extend beyond lost crops and it is often the long-term implications that are more widespread”.

There are also avocado orchards in the Tamborine, Northern Rivers and Central New South Wales that have been affected. However, Avocados Australia will not know the full impact for a few weeks, or potentially until the next flowering/fruitset. As the trees do not like the wet ground, growers will not know immediately if there is medium to long term impacts.

There were reports of scattered “panic buying” on social media in a very few of the stores in affected areas across the weekend, including fruit and vegetables. But supermarkets are reassuring customers that stock has been replenished in most of these stores and is not predicting much difference to seasonal prices.

The majority of wholesalers have also not been severely impacted as much of the produce is being sourced from outside the affected areas.

To keep up with current alerts, including flood and rain warnings visit the Bureau of Meteorology NSW Twitter or their website.