"In January, the UK imported far less fruit and vegetables from EU countries" 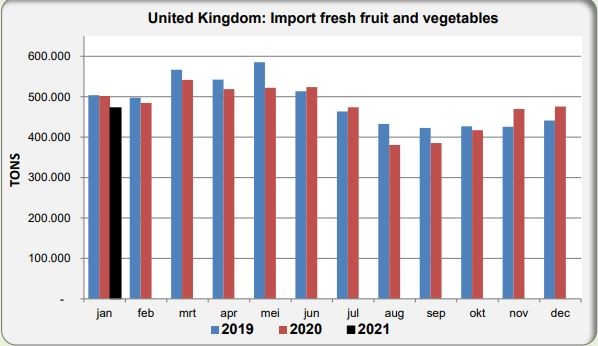 This major shift concerning EU imports is in line with the UK's total goods imports. Seasonal influences are less important for the total level than for fresh fruit and vegetables. The Brits, therefore, compared January 2021 with December 2020. That shows that imports of all goods from EU countries have decreased by almost 30% in value.

Imports of non-EU countries' wares also fell considerably, by more than ten percent. In January, total UK goods imports dropped by more than 20% vs. the month before. That country also exported significantly fewer (-20%) goods. Exports to EU countries were down by as much as 40%.

Imported more non-perishables at the end of 2020
Just before Brexit took place, the UK imported more long-life fresh fruit and vegetables. In November and December 2020, the Brits clearly imported more of certain products than in previous years. These included mandarins, apples, pears, and sweet potatoes.

A quarter less to/from the Netherlands
Spain is, by far, the United Kingdom's top fresh fruit and vegetable supplier. In January, import volumes from that country were reasonable, with only a ten percent decrease. However, imports from the Netherlands decreased by no less than a quarter. But, January isn't a significant Dutch imports month. Last year, it accounted for only five percent of the annual total.

For Spanish imports, January 2020 was good for more than ten percent of the total. Imports from other EU suppliers like France, Belgium, and Poland declined by the same margin as the Netherlands. Italy did comparatively well with a minus of only one percent. Imports of all major EU products, except lettuce, were down in January.

More from Morocco, Brazil, Egypt, and Peru
Bananas determined most of the UK's non-EU import picture. These made up a third of the total fruit and vegetables imported from outside the EU. In January, the Brits also imported fewer other top products from outside the EU, except grapes. These include mandarins (Morocco), tomatoes (Morocco), and melons (Brazil).