Spanish pepper deliveries dominate the market. Business was quite varied: In Berlin, availability expanded enormously and valuations then dropped to as low as €5,- per 5 kg-carton. In Frankfurt, the same unit cost between €8,- and 10,50, but there were also offers of €6,50 per 5 kg on some days. In Hamburg and Munich, prices increased, but this did not dampen demand. In Cologne, a wide price range was established. 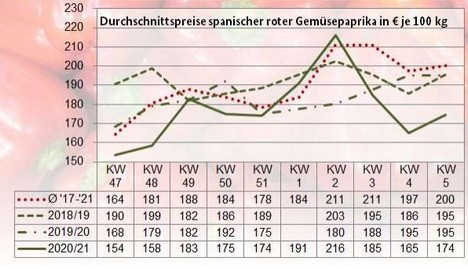 Turkish unloadings completed the marketing, but were completely absent in Cologne. Their presence was limited, in some cases very definitely. The resulting increase in demand was passed on to the customers by the distributors. Moroccan imports only appeared in Frankfurt, where one had to pay €8,- to 9,- per 5 kg-carton for the red and green products.

Apples
Local fruits still formed the basis of the assortment. Trade was calm and interest could be satisfied without any effort. Mostly the quality was convincing, which is why the sellers rarely had to adjust their prices.

Pears
The supply was dominated by Italian Abate Fetel and Santa Maria. Although availability decreased, it was sufficient to satisfy demand. Prices did not change significantly.

Table grapes
South African imports predominated. In general, demand was not particularly strong and the wet weather had a negative impact on general availability.

Oranges
The importance of Spanish Navelina slowly diminished in line with the seasonal status. Instead, more Navelate and Lane Late arrived from Spain, but in the end they only had a complementary status.

Lemons
Spanish Primofiori dominated, Turkish Lama completed the scene. Supply and demand balanced each other out, so that prices mostly remained at their previous levels.

Bananas
Traders had generally matched the influx from the ripening centres sufficiently to the sales opportunities. Demand was not particularly strong and was easily satisfied.

Lettuce
Iceberg lettuce came almost exclusively from Spain. The lack of acceptance by the catering trade was noticeable. Prices generally dropped off, in some cases quite strongly.

Cucumbers
Spanish snake cucumbers dominated, more so than Dutch and Greek ones. Belgian items were scarce and did not progress beyond a supplementary status, although their availability had expanded.

Tomatoes
There were all sorts of movements in the trade, as business developed quite differently depending on the place. In some places, Dutch and Belgian tomato offers were too expensive, so that customers tended to prefer the Spanish and Turkish goods.