Along with facing the usual weather challenges, Canadian fruit and vegetable farmers had to contend with labour shortages in 2020 as a result of the COVID-19 pandemic. Nevertheless, farmers adapted: compared with 2019, fruit and vegetable sales were down 0.8% to $2.5 billion, while harvest area was down 1.4% to 180,815 hectares.

The horticulture sector is labour-intensive and relies on temporary foreign workers. The COVID-19 pandemic delayed the flow of these workers into the country, resulting in labour shortages. In 2018, for example, 54,734 temporary foreign workers were employed in the agriculture sector. That year, slightly more than half of these temporary workers were employed at fruit and tree nut (27.1%) or vegetable and melon (24.1%) farms, while one-third worked at greenhouses, at nurseries and in floriculture (33.6%).

Vegetable sales rose 2.5% to $1.3 billion in 2020, with the increase attributable mainly to higher farm-gate prices, while, for some commodities, yields were slightly above their respective five-year average yield. The sales increase was driven by higher sales of cabbage (+9.6%), sweet corn (+7.4%) and tomatoes (+6.4%). According to the Consumer Price Index, annual fresh vegetable prices rose at a much slower pace in 2020 (+3.0%) compared with 2019 (+12.7%). 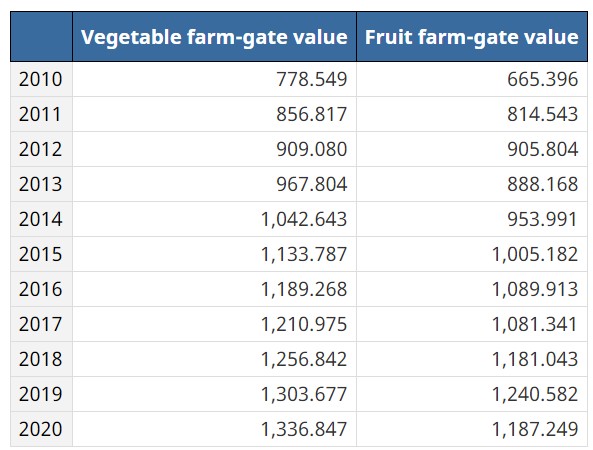 Sales of first spring vegetables and early summer fruits down from 2019
Asparagus, one of the first vegetables to be harvested in the spring, was the first crop affected by labour shortages resulting from travel restrictions in March and April. Production fell by one-quarter (-24.3%) to 7.7 million kilograms—well below the five-year average of 9.0 million kilograms. The decline in asparagus sales was less pronounced (-7.7% to $41.6 million) because farm-gate prices rose by over one-fifth (+18.4%).

Strawberry production (-11.4%) and sales (-2.3% to $127.5 million) were down compared with 2019, despite the popularity of u-pick activities during the COVID-19 pandemic. Census data show that over two-thirds of strawberry farms (69.0%) reported farm-gate sales as well as stand, kiosk and u-pick sales in 2016.

Wild blueberry production in Quebec rose 10.7% to 34.4 million kilograms, accounting for half of the national crop. Sales were up 1.2% to $53.0 million. 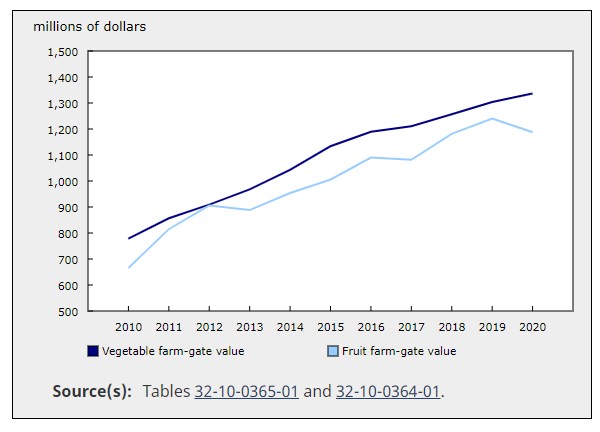 Farm-gate value of fruits and vegetables
Apple production rose 2.1% to 391 million kilograms, while sales rose 5.4% to $259 million, in part because of the popularity of u-pick apple orchards, considered a safe family outing during the pandemic.