An unusually cold winter for South Africa had a particularly acute impact on blueberry orchards in parts of Limpopo and Mpumalanga that are not usually associated with low temperatures.

Temperatures (damage can occur from below -1.5ºC) dropped as low as -8º C in Lydenburg. It caused blueberry flowers and young fruit to freeze, causing cell rupture. 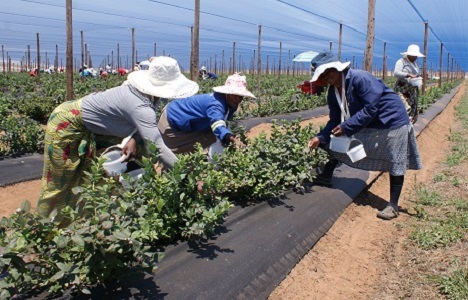 The low chilling requirement blueberries grown in these parts flower  very early, in winter, in order for an export crop this time of the year, when there is a good window to the UK and Europe, increasingly also the Middle and Far East.

Widespread cold damage has been reported in the north of the country, across different cultivars, with some unfortunate growers three times subjected to freezing incidents during the early part of the season.

It is estimated that the South African production will be down by a thousand tonnes due to the cold damage, coming to an expected 22,000 tonnes of blueberries this season.

These cold snaps were also responsible for the freezing of navels in the Senwes region (Marble Hall & Groblersdal), with devastating consequences to the packouts.