Supplies of blueberries in North America are slim right now.

“This week and next are possibly tightest of the year,” says Lee Kimball of Somerfield Farms LLC, based out of Wilmington, NC. “Our supplies have been lighter than expected due to a couple of factors including weather. But we’re not alone – there are quite a few marketers whose supplies have been short.”

With the domestic blueberry season having wrapped up in North America, supplies are now coming in from both Mexico and Peru. “Mexico didn’t really start with any kind of volume in October,” says Kimball. It’s estimated the crop out of Mexico should have a 20-25 percent increase on fruit that’s expected to be high quality in appearance, taste and shelf life. “But the volumes are just not there yet,” adds Kimball.

The timing is similar to last year’s Mexican crop. “The grower side was projected to be strong at this point and they were not, so we need to adjust expectations as to when Mexican blueberries will really begin to arrive in significant volumes,” says Kimball.

Volumes up in Peru?
Meanwhile some volume has arrived from Peru, a crop that’s also projected to see an approximate 40 percent uptick in volume though Kimball says volumes have not been matched yet. This is unlike last year when Peruvian volumes seemed more consistent at this time.
In addition, Argentina is also supplying fruit that’s said to have improved in quality over last year. “They’ve been able to fill in a bit of a gap in the market with quality fruit,” says Kimball. 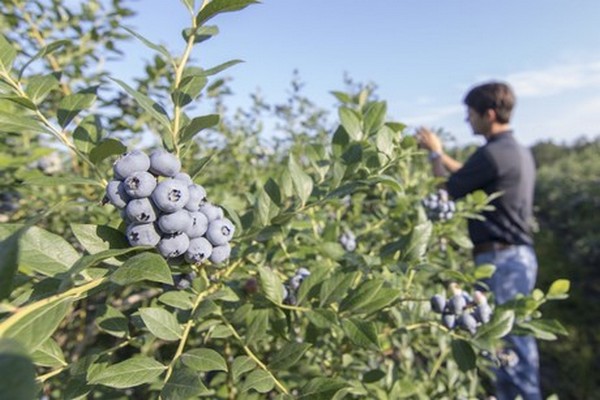 As for demand, North American demand for imported blueberries is moderate to good right now and similar to this time last year. “But the fruit is limited so if you’re not committed, open fruit on the market is $34-$36/pint and higher. That’s hard for a retailer to want to jump on,” says Kimball.

However, shipments to other countries are having an affect on North American supplies. “There’s been an uptick in volumes going to Asia and Europe that’s creating a pull,” says Kimball. “When Peru started, the market was weak with a low price point so they diverted or held back some fruit from going to the U.S. They found decent markets for it in the other countries. That’s allowed them to maintain those high markets in the other countries where the volume wasn’t overwhelming in the early part of the season. They’re able to go to those markets to get good pricing, but they do need the volume to come here to the States.”

The affect on domestic growers
All of this import movement has had an effect on domestic production of blueberries in states such as Michigan for example, a long-time blueberry growing region. “They’re seeing their market window become more competitive because they have B.C. and the Pacific Northwest pushing on one side and Peru on the other,” says Kimball. What can be challenging in the domestic market is changing over blueberries to newer varieties. “It takes 10-12 years in Michigan to reach full maturity of a plant so you don’t have the capability,” says Kimball. “Florida faces the same challenge with Mexican and Chilean fruit coming in during their window.”

While the markets are strong now, they should level off in November and Kimball predicts it will hit a $28-$32 market in the first three weeks of November thanks to volume coming on. Peru started harvesting peak volume just over a week ago and those volumes should hit North America by week 44. Mexican supplies will also hit stronger volumes at that time.

“There’s relief on the supply side but we’ll have a few more weeks of tight markets here in the U.S.,” says Kimball.