New entrepreneurs show they are positive in times of Corona:

For many long-established companies, it is a challenge to keep their business afloat in these difficult times. But how does the Corona crisis affect new companies in the fruit and vegetable sector? FreshPlaza.de spoke to two new entrepreneurs in the industry about their experiences in their first year of business full of challenges.

"Doubling freight costs"
After a long career in the fresh produce trade, Murat Türengül decided last year to continue his business under the Nord Frucht brand. Since then, the Bremen-based fruit agency has been offering its customers in the German fresh produce markets and food retail trade a wide range of fresh products. "Naturally, we too are feeling the effects of the crisis. In some cases we have to reckon with a doubling of freight costs. As a result, we are also feeling the corresponding price increases.

In the first weeks of the crisis specifically, there were supply gaps and shortages of goods. In the meantime, the expert observes a stabilisation of the market. However, it remains uncertain to what extent the virus will continue to affect the markets in the further course. "Last week we received the first Turkish cherries, on schedule. Spanish batches are also arriving as expected. So for the moment I am quite satisfied despite everything. But in the medium to long term, as an import agency we have to expect increased labour and freight costs and further challenges in the market environment," Türengül says.

"We hope for a successful re-launch of the hospitality industry"
The Nuremberg trader Rahime Berisa looks back on exciting times as well. At the beginning of the year, she opened the doors of her sales stand at the Nuremberg wholesale market for the first time, and two months later the first Corona death was announced in Bavaria. "At the beginning of the crisis we felt the effects of the hoarding quite strongly, especially with regard to potatoes and onions. In addition to this, customers preferred to buy regional produce. Now, the turnover of goods has stabilised to some extent and Spanish, Italian and Dutch products are also being traded in the usual volumes," says the owner of MCR Markthalle LLC. 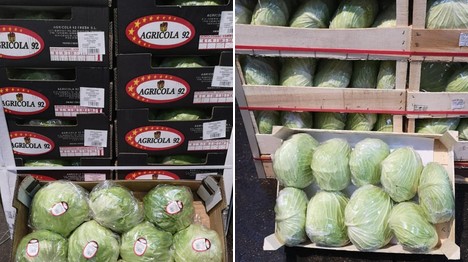 Exhibition of goods at the MCR Markthalle stand

However, the loss of the catering trade has caused the trading area on Leyher Straße to lose a great deal of its vitality. Berisa: "We also mainly supply restaurants, which is why we lost 60-70 percent of our sales. Only our customers in the specialist retail sector have been serviced continuously."

Despite the exceptional situation, the retailer is in a particularly positive mood. "At the moment I'm still here and I'm surviving. Even within our customer base, there have been no insolvencies so far," she says. On the contrary: the inventiveness during the closure of the hospitality sector was particularly remarkable. Within a very short time, take away and delivery services were set up. Now the Bavarian gastronomers are about to make a fresh start. "The first two customers should already be reopening, soon the beer halls will follow. My only hope is that the hospitality industry will start up again soon and that there will not be a second wave of Coronavirus in the country."