Russian imports of fresh fruit and vegetable have seen a recovery in recent years. That was after that country introduced a boycott on food products from the European Union in 2014. However, in 2019, these imports declined again. Compared to 2018, four percent fewer fruit and vegetables were imported.

The import of fresh vegetables remained at the same level as in 2018. Last year, however, fresh fruit imports shrank by five percent. Notably, the ever-growing banana imports came to an end. There was a sharp decline in the import of apples, pears, and peaches/nectarines. These fell by 17, 16, and 15%, respectively.

Mandarins are the second most imported fruit in Russia. Imports of this citrus fruit have never been as high as they were last year. The import of the major product groups was, however, less. These are products like tomatoes, oranges, and grapes. Products of which clearly more were imported in 2019 were mainly onions and cabbage. Avocados and mangos were fruits among the less popular products which imports increased.

The third-largest importer in the world 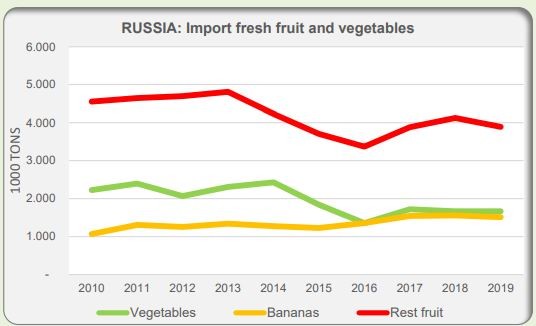 The end of the growing imports from China
Of the countries that export to Russia, Ecuador is the largest, as a banana supplier. It is followed by Turkey and China. Imports from China shrank by no less than ten percent. That brought an abrupt end to the growing imports of Chinese fresh fruit and vegetables. The import of Chinese apples, in particular, took a nosedive in 2019. Considerably fewer mandarins and tomatoes were imported by Russia from China last year. There were, however, Chinese products that fared well on the Russian market last year. These were grapefruit, cabbage, and bell peppers. 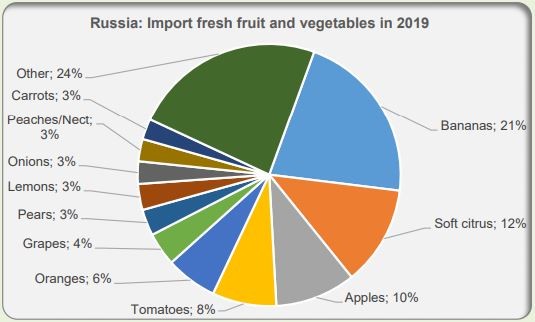 More from Turkey again, but not as much as in the past
In 2019, Turkey sold a little more of their fresh products in Russia than in 2018. But, it was nowhere near as much as between 2013 to 2015. Mandarins are the most important product when it comes to imports from Turkey. The import of that product declined sharply in 2018. However, last year just as many of these fruits were imported by Russia as in 2017. The number of Turkish grapes imported also plummeted in 2018. This seems to have recovered somewhat last year. Turkish citrus imports, too, took a knock in 2019.

Fluctuations in tomato imports
In 2019, Russia imported an unusually high volume of tomatoes from Turkey. However, Russia gets most of its tomatoes from Uzbekistan. That volume remained stable in 2019. That was offset by the considerable shrinkage of tomato imports from China, Morocco, and Belarus. 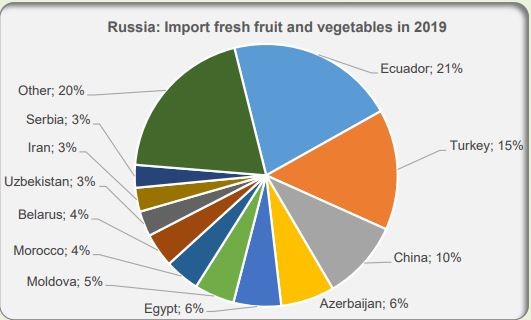