Widespread rain has been falling for two days over the central and northern parts of South Africa, bringing relief after several heatwaves that saw temperatures edge past 40°C and warm winds “like an industrial hair dryer”, according to a Limpopo citrus grower.

In the Lowveld an avocado farmer says that it has been immensely hot, average temperatures of 37 to 38°C recently and reaching 43°C at its hottest. Fruit drop on his avocado orchards were more pronounced because of the heat and, particularly, the warm winds.

“We always get these winds but the difference this year is that the winds came earlier, continued for longer and they were warmer,” he says. “Many farmers have weather stations and keep longterm weather records and according to some of them, November 2018 was two degrees hotter than the previous November, while this November was in its turn about two degrees hotter than last year!”

Some citrus growers in the province say they are, in fact, pleasantly surprised that, despite the unusual heat, November drop in their orchards hasn't been more than usual. They remain, as they have reason to be, afraid of hail this time of the year, especially when temperatures build up like they've done.

During late October temperatures over 45°C were measured in Limpopo, unusually hot for early summer.

In Letsitele, an area that has been in drought since 2015 and on 70% water restrictions because the Tzaneen Dam is only 5% full, above-average November rainfall has revived orchards and surrounding wild vegetation. Unfortunately the rainfall in their catchment areas, usually much higher, hasn’t been enough to make a difference to the dam level. 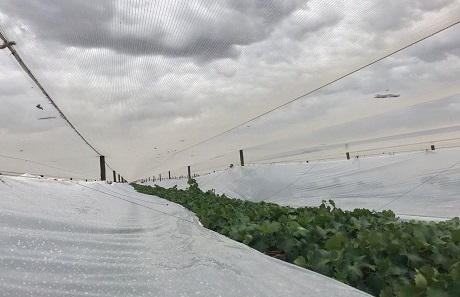 Their vineyards are covered and the fruit remain dry, but persistent humidity and wet soil are difficult to negotiate, increases pest pressure and farms lose days of harvesting. Some have already lost three days which, in the grape sprint that aims to put fruit on boats for the pre-Christmas market, really complicates the schedule.

Varieties like Starlight, Midnight Beauty and Prime have shown incidences of burst berries which necessitate more work on the bunches in the packhouse.

Sugar development of Prime took longer than usual and on some farms, unlike the usual schedule, Tawny was this year picked before Prime was ready. "The weather is definitely a bit strange this year."

The expectation is that the rain will have less of an impact on mid-season varieties, stalwarts like Red Globe and Crimson, and reports on late-season varieties are positive.

At the end of last week there was a ‘microburst’ (an intense small-scale downdraft as a result of thunder storms) over Fort Beaufort, citrus growing area in the Eastern Cape, leading to destruction of several houses and as yet undetermined damage to citrus orchards. The province is also very dry.

KwaZulu-Natal has had a very unusual high number of tornadoes over the province.