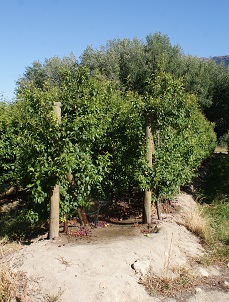 Who would consider the impact of orchard trellising on a  carbon footprint?

Yet a plum producer in the Western Cape found that through reducing planting distance, reducing tree height and planting double rows on ridges (pictured right), diesel use for spraying trips, concomitant effectiveness of spraying and thus lower agro-chemical use, not only resulted in significant cost savings but carbon emissions savings as well.

The Confronting Climate Change’s carbon footprint calculator assists producers to calculate their produce carbon emissions. The tool is unique in the world in that it has hitherto been wholly funded by South African fruit and wine industry bodies (from this year users have to pay), and take-up has been wide over the last eleven years of the calculator’s existence.

Blueberries to start measuring carbon footprint
Many in the South African fruit industry are now measuring the carbon footprint of their production, packing and cooling, using the homegrown carbon calculator. Uptake of the tool has been increasing, especially in the Western Cape (topfruit, stonefruit, table grapes and wine grapes, citrus) and in Mpumalanga (mostly citrus). The first blueberry production units have started to apply the tool to their production chains, says Anél Blignaut, project manager of the Confronting Climate Change initiative.

The South African blueberry industry is heavily reliant on air freight which is six to eight times more carbon-intensive than sea freight.

She notes that they hope that the tool’s use within the subtropical sector will grow. 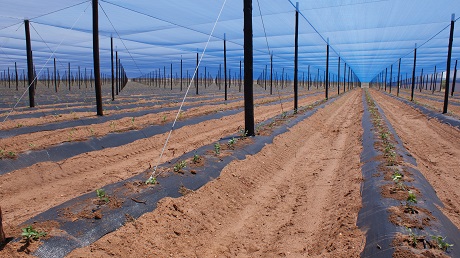 Soft citrus more carbon-intensive than hard citrus
“Solar energy on the farm is a no-brainer, provided the farmer can afford the capital outlay, but it’s becoming more affordable all the time. Diesel usage is another aspect that’s easy to address. We always tell farmers to start by optimizing their electricity usage, looking at the design of their irrigation,” she says. Best practices are moreover based on acknowledged wisdom, such as soil analyses as a base for nitrogen fertiliser applications, instead of pre-emptive and perhaps unnecessarily heavy applications.

The initiative’s benchmark values indicate that in general citrus and pome fruit has a lower carbon footprint when measured as kgCO2e/kg fruit when compared to stone fruit, wine and table grapes. The reason for the higher carbon footprint in stone fruit is because of the lower tonnage of fruit.

Seasonal factors such as the plant water requirements and pest and disease pressure will also influence the carbon footprint of a commodity. 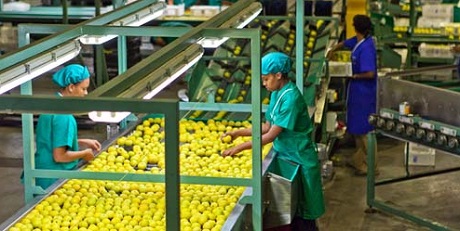 Comparisons are tempting but real value lies in setting baseline
While it is tempting to use the tool to compare industries, its real value lies in allowing a producer or a packhouse to measure its own performance over time, once a baseline has been established after at least three seasons to accommodate seasonal variations, Anél says.

“Farms differ so much that it doesn’t make sense to compare a farm whose topography allows gravity to move water to the orchards, with a farm that has to pump its water from the dam,” she points out, noting that energy usage for irrigation is a hot spot of carbon usage in farming.

During production, another major generator of kg CO2e (equivalents of carbon dioxide, which includes methane and nitrous oxide and the unit in which a carbon footprint value is expressed) is the use of synthetic nitrogen fertilisers. She emphasises that it is important to ensure that only the optimal amount of fertiliser is used.

She continues: “Some producers who’ve been using the tool for a number of years tell us they’re taking a closer look at their inputs and production, simply because now you’re measuring everything you use. They say that they’re already looking ahead, asking themselves: ‘What’s next? How do we set ourselves targets?’”

Packaging most carbon-intensive packhouse component
In the packhouse, there is a single component whose carbon footprint far outstrips that of other inputs, and which often, Anél says, already arrives swaddled in its own packaging.

In the case of stonefruit, packaging accounts for 84% of carbon use in the packhouse, 70% for topfruit. The CCC’s data from 2011-2018 show that because of the different types of packaging used, topfruit packhouses are almost half as carbon-intensive as stonefruit.

Cooling is a particularly energy-intensive, and it should be kept in mind that the majority of South Africa’s electricity is carbon-intensive, coal-powered electricity. Electricity usage is far and away the largest carbon component in this process, followed by refrigerant leakage.

The calculator has been developed and is managed by Blue North Sustainability. The Cape Town-based company has recently been selected by Dutch company eLeaf as the implementation partner for FruitLook water management tool.

The calculator has been incorporated into the environmental component of the SIZA audit, and it has also been entrenched into the wine industry, as well as employed within the grain industry (for the latter, Blue North has developed a carbon sequestration tool which could eventually be extended to the fruit industry).