Anything could still happen in the potato season

On 10 September, the Northwestern European Potato Growers Association (NEPG) released figures about the potato harvest in that part of the world. These figures are an estimate based on several trial grubbings. The result? The yield is estimated at between 27 and 27,3 million tons of potatoes. This is three percent higher than the five-year average and twelve percent more than last year. How do traders view the new season? 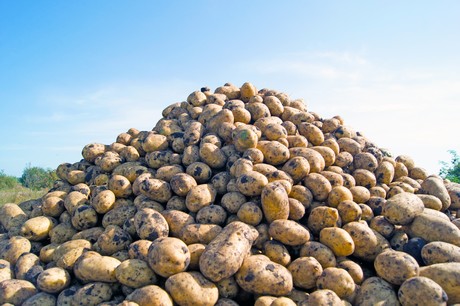 In the Netherlands
“Prices are moderate at the moment,” says Adrie Amperse of Amperse Handelsmij from Kortgene, in the Dutch province of Zeeland. “Last year’s high prices and continuous demand from the industry have led to areas being expanded in Western Europe this year. The percentage of contract cultivation has also grown this year, which means there is little competition, and fewer buyers, on the free market.” 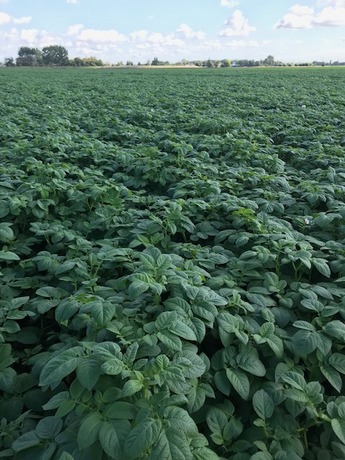 A potato field in the Dutch province of Zeeland, foto Amperse Handelsmij

“This has made for really disappointing prices for growers with revenues currently hardly covering their costs. It is bubbling along on the market with no really profitable prices. Yields are reasonable, and the prices of €10-11 (in mid-September) means cultivation is not bringing in any real profit.”

Last year, french fry products, in particular, dominated the market. “This has not changed this year,” says Adrie. “Last year, 70 to 75% of the potato harvest stood under some or other form of contract from french fry manufacturers. This year, this is up to around 80 to 85%. A large part of the harvest is, therefore, fixed in advance. That disrupts operations on the free market.”

A substantial portion of the harvest is earmarked for the export market. “Africa is usually the largest sales market for potatoes. However, this year, we see opportunities in Eastern Europe. It was (too) dry in that part of the world this year. We can continue to supply markets in the Czech Republic, Poland, and Romania from the Netherlands. The dry weather did not hit the Netherlands too badly. Many growers went looking for possibilities to irrigate their lands, and that has brought Dutch yields to a higher level.”

There are sales opportunities for french fries in the Asian markets. “There are many opportunities for the industry. The Belgian industry, in particular, is growing considerably year on year. In Asia, more and more ready-made potato products are being purchased every year. That is a market trend at the moment,” explains the Dutch trader. 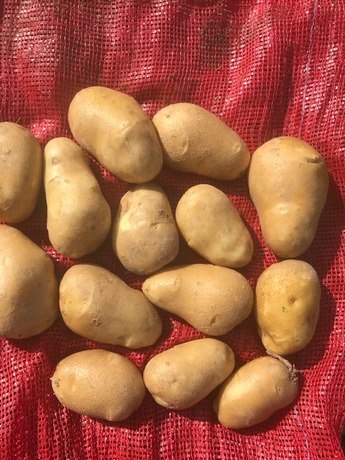 Many of the potatoes are grown under contract, foto Amperse Handelsmij

“The Spunta is especially popular in the African market. This oblong variety is, however, not wanted in Europe. People in Southern Europe also like the Spunta. The Fontane and Challenger varieties are currently popular with french fry makers. People grow these varieties for the industry.”

“More and more varieties are continually being added too. It is no easy task to put a new kind of potato that is popular with both consumers and the industry on the market. The market demands much of these new varieties - it could even be compared to professional sports. There are almost 500 different kinds of potatoes that are all competing for people’s favor. They actually compete against each other. All in all, the 2019-20 harvest is becoming an exciting potato year with many challenges and opportunities again,” Amperse concludes.

“Are the prices favorable?” asks Adrie Kleinjan of Kleinjan’s Aardappelhandel from Nieuw-Beijerland in the Netherlands. “That depends on how you look at it. There are enough good export chances for the new season, and the demand from the french fry industry is offering ample opportunity for a good year,” says this trader. 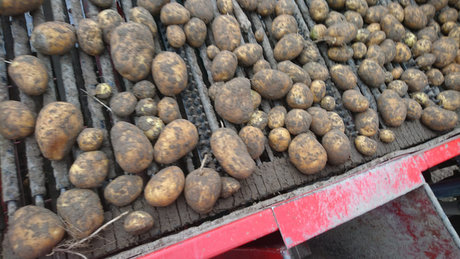 “There are currently sufficient potatoes and sales, and there is room in the market for more. However, there are very few new potential sales markets left in the world. After all, potatoes already go to many destinations across the globe already. The growth in new markets is now mostly for specialties in the potato market, not for bulk products. Most of the export goes to Africa and Eastern Europe. But, there is also a lot being sold in the Caribbean region, the Middle East, and Asia.”

Since it is so dry in that part of the world, Eastern Europe is buying more potatoes this season. “In the Netherlands, the dry weather was periodic, and conditions differed greatly from region to region. However, this year, we are sitting at above the five-year average, and that offers good prospects. But, it does not matter how much we have; what matters is how much we can move. And at the moment, that is enough,” says Kleinjan.

“A reasonably large volume is going to the export market and the industry. Processing is increasing overseas, all over the world, too. That absolutely offers opportunities to growers and traders. Most of the potatoes for, for instance, the french fry industry are cultivated under contract. However, this sector will always have to do some of its trade in the free market.”

Belgium
“It is actually still too early to make a harvest estimation for the coming potato season,” says Johan Kant of Kalisa Trading from Sint-Niklaas in Belgium. “I would only be able to draw a conclusion about this season in mid-October. For now, I can only give an interim report.” 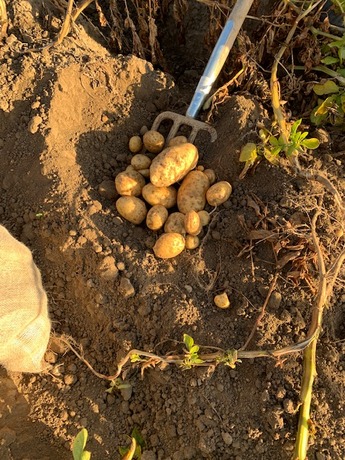 Some 50 tons of net potatoes could be harvested, foto Kalisa Trading

“I find the question of what the prices will do in the new potato season to be a difficult question to answer,” says Johan. “In Northwestern Europe, the current effective price is at around €10-12. That is considerably better than prices in the 2017 season. Despite the large area we have this year, there has never been as big an area of table potatoes planted in Europe as is now the case. In the Netherlands, the season is somewhat similar to the one in 2017.”

“In Southern Belgium and Northern France, it is less good because growers there had fewer chances to irrigate. There were reports of people being unable to water their potatoes in France and Belgium, but this is fake news. Two-thirds of French farmers were, after all, able to irrigate. Reports like these influence the futures market,” says Johan. “That is a market that, in my opinion, is entirely fabricated. Prices increase when there are reports like these, they then drop again when other information is received. Daily news strongly affects prices.” 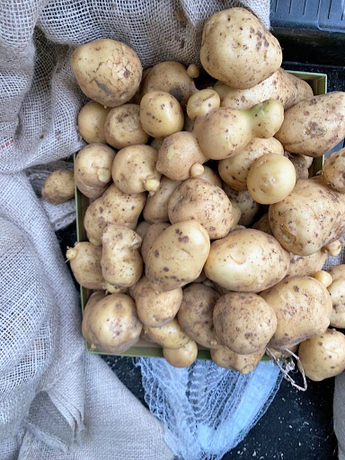 Although misshaped, these potatoes are of excellent quality, foto Kalisa Trading

“In my view, with this €10-12, we have a good price for growers at the moment. I think, in the coming period, it will be about how the harvest goes and whether there will be any more significant rainfall. Regarding this campaign, it can actually only get better in the coming weeks. Many people find the current prices to be weak, but for a grower with 40 to 50 tons of potatoes, it is a good price.”

“The estimates for the five countries in the NEPG report are between 27 and 27,5 million tons. I think we could eventually approach even 28 million tons. If that happens, I expect the potato price to dip below €10, even though that may only be temporarily,” Kant continues. “As I said at the start of this discussion, this is an interim report. A potato is round and could roll in any direction. There is, however, no chance of shortages this year. I certainly expect some heavy rainfall in Belgium in the coming weeks until the end of October too. Then we can certainly achieve that 28 million tons mark.” 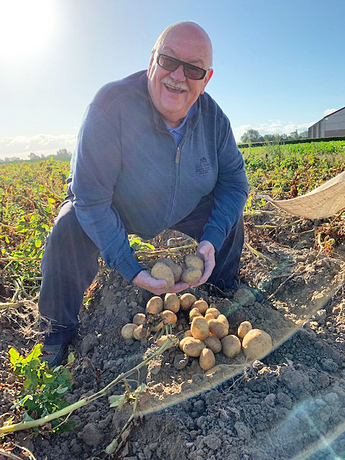 Johan Kant of Kalisa Trading in the field

“The french fry industry is running the show on this market. Traders and exporters no longer have sufficient export demand to affect market prices. When it comes to the export sector, Belgian potatoes cannot currently compete with their Dutch counterparts. It is too dry in Belgium at the moment. Belgian and French potato farmers are trying their best to make the most out of the current situation. They are leaving their potatoes in the ground to continue growing.”

“Not to regrow the potatoes; that is nonsense, I think. Potatoes are like weeds; they keep growing if you leave them in the ground. In the stinking hot summer of 1986, there were no yields to talk of on 10 August. It only started raining after that, and by the end of September/beginning of October, we could grub 35 to 40 tons of potatoes per hectare. The conclusion - it is a weed,” the Belgian trader says. 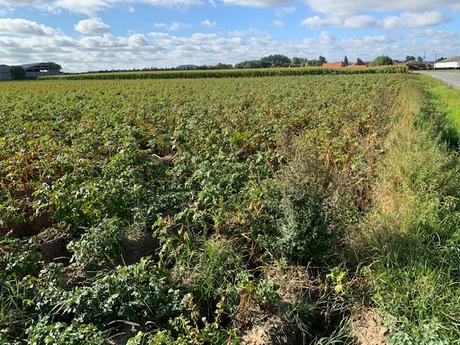 “We used to rely on trade to Russia, but that market has been closed since 2012, for political reasons. The round potatoes that used to go to that country are difficult to sell on the markets when people demand oval or oblong potatoes. Potato and french fry consumption are increasing in other parts of the world. Even in China, a country where people traditionally eat very few potatoes.” 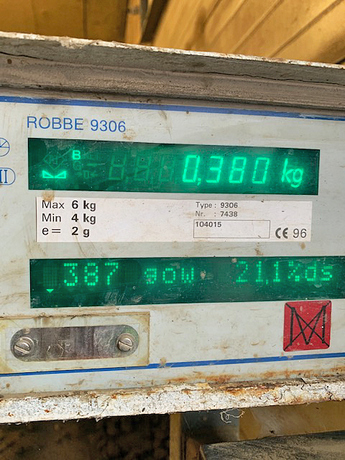 “That is not to say there are no direct opportunities for European potatoes. For example, China has expanded its potato acreage from 70 million to 100 million tons. And Asian countries such as India, Pakistan, and Afghanistan have also planted enormous amounts of potatoes for these potential markets. And what do you think of Egypt? Egyptian potatoes made up a large proportion of our import potatoes last year,” concludes Johan. (TD)