Cold temperatures moved through the southeastern United States mid last week, bringing freezing temperatures to parts of Georgia and north Florida. With blueberries starting in Florida in just a few weeks and some of Georgia's crops such as peaches and Vidalia onions beginning in April, there was some initial concern for damage to these. However, growers from all categories reported minimal disruption, aside from a stronger market due to a combination of stronger demand and weaker production on vegetable items.

Florida blueberries
The blueberry season in Florida is due to start in just a few weeks time. According to Allan Sanchez of Red, White and Blues Farm just outside of Gainesville, the temperature wasn't quite cold enough for long enough to inflict any damage on the blueberry bushes, which are in full bloom now.

"As of right now, we have not had any problems," he said. "We run sprinklers to raise the temperature of the beds and everything seems to be going okay. If anything, it was probably good for the bushes. Flowers are on the bushes and we are starting to see small fruit appearing. It's expected that we will start harvesting in a few weeks' time, in early April. This coming week, the forecast is for warmer weather and everybody is expecting a good crop this season." 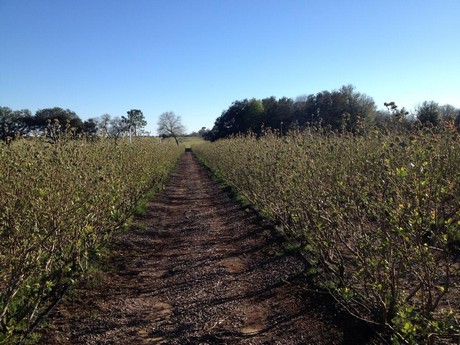 Georgia peaches
Over the last two years, Georgia's peach growers have endured two very tough seasons in which late freezes have wrought devastation to their crops. While cold temperatures did move through the region, fortunately the season is still far enough away for any damage to be sustained on the peach trees. Jeff Wainwright of Taylor Orchards in Reynolds, about 40 miles southwest of Macon, said the trees have not yet bloomed and therefore the cold had minimal effect.

"We did sustain a little bit of damage, but it was minor and did not affect the crop," he explained. "The trees are just about to bud and we expect the peach season to commence during the second week of May. Things are looking good so far and we should have peaches all the way through August."

Vegetable crops
Georgia's vegetable season is also on the horizon, while Florida is currently in production of several vegetable commodities. For Georgia, while some of the summer vegetable crops are still a couple of months away, other commodities like Vidalia onions and beans are closer. One Vidalia onion grower reported that initial assessments show they did not receive any damage. "The cold was very spotty and in our region, it doesn't look like we were affected," she said. "However, it is still too early to know with any great certainty, but in a few weeks we will know for sure."

Many of the summer vegetable crops in Georgia have not been planted yet and therefore the cold has not impacted the market in this region. Production in Florida on the other hand, has slowed due to the cooler temperatures. In addition, a slowdown in supply from other regions has increased demand, which has caused the market to strengthen.

"There is not much in the ground in Georgia yet, although we should start seeing some beans in April," said Haley Charnock in the Georgia office of Fresh-Link Produce, a nation-wide produce shipper. "Usually by early-mid May we really get going. The cold weather in Florida however, is definitely having an impact on the markets. Prices for most commodities are up, including bell peppers where we have seen a tripling in price out of Florida. Demand has risen for Florida-grown produce because supplies have been tighter out of Mexico and the West Coast. With the cold weather, yields have been impacted, which is good for quality but not for supplies."

Much warmer weather is forecast for the region this upcoming week which is expected to boost production on all crops.