The first South African pomegranates have left for Europe, where Southern Hemisphere fruit fills a good gap in the market.

The effect of the drought is still felt in pomegranate orchards in the Western Cape, but sizes are looking better than last year and by next season volumes will be boosted when growers in other parts of the country start producing for exports. Pomegranates are sent to retail programmes, wholesale markets as well as to processors.

By the end of this week the Wonderful harvest will commence, which is the variety that performs best under South African conditions: it travels well, its internal colour and sugars are great. The only drawback is that the skin doesn’t colour as well as it does elsewhere in the world. 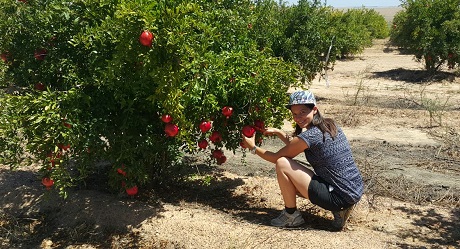 Late grapes and plums filled up cold storage
The first shipments of Acco and Herskovitz are underway after some logistical challenges to the start of the season. Pomegranates, being a minor crop in South Africa, share cold storage and packing facilities with other commodities. Grapes running late as well as late plums caused some cold storage difficulties for pomegranate producers at the beginning of February and matters weren’t helped by Cape Town Harbour being wind-locked for many days.

“We really had to think out of the box at the start of the season and find alternative cold storage facilities,” says Carnel Geddes, newly elected chairperson of POMASA, the South African pomegranate industry organisation. “If we had a stronger domestic market for pomegranates, it would alleviate some of the pressure, but local prices are very volatile. A few pallets make a huge difference on the local market. It never remains a secret when there is a gap on the local market and fruit arrives very quickly at the market.” 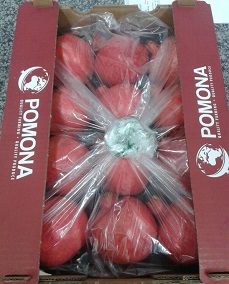 Carnel works for Pomona, the only pomegranate grower-exporter in South Africa, based in the Swartland. She recounts how some shipping lines ran out of containers just as their pomegranates – already packed a week earlier – had to be loaded.

“That was quite stressful - if you miss a ship, it’s really a huge problem, especially with the earlier varieties that don’t travel as well. Thank goodness, with just a few hours to spare, we managed to get some containers and we made the ship.”

Exporting South African pomegranates is still a very good business, she says. There is strong demand from Europe when South Africa comes on the market, but it is a gap that grows smaller every year with the arrival of Peruvian pomegranates.

“There was another challenge this year with India that had a bumper crop. There is big domestic consumption of pomegranates in India but this year with their excess they also exported, and we encountered a lot of Indian pomegranates still on the market which makes it difficult to negotiate. Hopefully it will have worked itself out by the time South African pomegranates reach the market by next week.”

European prices better than in Middle East
Prices in Europe are better than in the Middle East, although the latter market is a growing one as they get to know South Africa as a pomegranate producer. “The pomegranate industry first focused on Europe when volumes were smaller but as volumes increase every year, as orchards reach maturity and as new producers join in volumes, we need to diversify and find new markets.”

POMASA is engaged on the preliminary work to open up new markets, particularly in the Far East. There is currently no access to the US market either, but the transit time is longer than for other destinations. 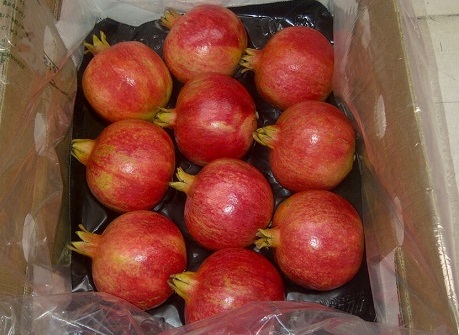 No FCM interceptions last season
The EU’s false codling moth regulations, in force since last year, have necessitated pomegranate producers to implement the Phytclean system. There were no notifications of FCM interceptions on South African pomegranates last year and, Carnel notes, producers are committed to keeping it that way.

Pomegranates are particularly labour-intensive (therefore expensive) to farm organically. She notes that while there were some enquiries into organic pomegranates some years ago, interest seems to be have waned.

One of the major matters with which the industry body busies itself is the registration of chemical products for use on pomegranates. “Being only a minor crop, there has in the past not been a lot of attention on pomegranates on the part of chemical companies, who, as the owners of the labels, are the ones who have to register the products,” she explains. “At POMASA we can’t register the products ourselves, we can only lobby chemical companies, and we’re very grateful that over the past few years some new products have been registered. But it still remains a big challenge for us, there’s a lot of work that needs to be done in terms of research.”

Lastly, she points out, there has been a recent one-day labour strike in Wellington, where large pomegranate orchards and most of the pomegranate packhouses are located, which was quickly resolved, but it is a factor that is never far from the mind of South African producers.

Pomegranate industry overview
Current pomegranate acreage in South Africa is just over 930ha, mostly in the Western Cape, with 1.178 million 3.8kg equivalent cartons exported during the 2017/18 season, which was 19% down on the previous season. The European Union received 44% of South Africa’s exports last year, with the Middle East in second place (22%) and the United Kingdom third (17%).