The "Bouquet para preparar" ("Ready to prepare Bouquet") line consists of trays with the necessary vegetables for the preparation of creams, soups, vegetable dishes, salads or smoothies. At present, Anecoop has most of its production for this line in the Region of Valencia, where it will continue to prepare the trays featuring ingredients that are grown in the area.

However, in the last quarter of 2019, Hortamar will also introduce some options with Almeria-grown products, such as tomatoes, cucumbers, peppers, eggplant or zucchini.

The "Bouquet para preparar" line is available at Eroski from the month of January, and this week it has also been introduced in Carrefour hypermarkets. Soon they will also be launched in other famous supermarket chains. 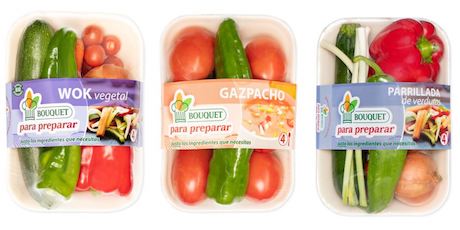 The launch of this initiative dates back to October 2018, when Anecoop presented this new product line within the framework of Fruit Attraction. Thus, Anecoop has taken a new step by offering simple solutions to those who wish to eat healthy food, but who either have little time to do the shopping and cooking, or have no experience in the kitchen, since the recipe that is included on the back of the tray makes it very easy to prepare.

Furthermore, by including the right ingredients in the right amounts, food waste is avoided, and since the container is biodegradable, it is more environmentally-friendly.

The trays include an easy recipe. The options include pumpkin and carrot cream with curry and pumpkin seeds; broccoli cream; cream of parsnips with apple and ginger; traditional vichyssoise; carrot cream with apple and turmeric; gazpacho; orange and red smoothies; wok (or sautéed) vegetables; grilled vegetables (baked or in brochettes); American cabbage salad; vegan carpaccio (very thin vegetable slices to be consumed with a sauce); cold apple, lemon and leek soup, and vegetable stew and broth. The trays, which have an average shelf life of ten days, allow you to prepare a meal for 3 or 4 people for less than one Euro per guest.