The old ruins of the Acropolis tower over the Greek capital. The foot of the mountain was once a fertile valley, but nowadays it’s covered with buildings and houses between 600,000 and 700,000 people. Not four kilometres from the historical centre of the city, the wholesaler’s market can be found, a unique location, and the pride of general manager Ioannis Triantafyllis. He gives us a tour of ‘his’ wholesaler’s market. 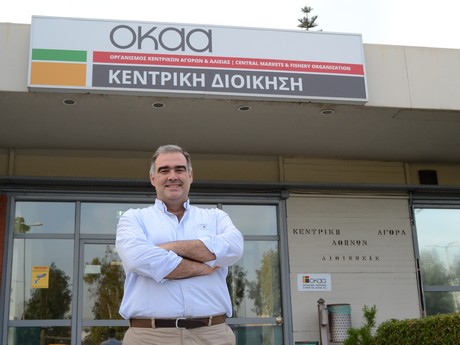 Lorries and vans come and go. A loaded passenger car passes by occasionally. The wholesaler’s market is crowded on Thursday afternoon. Up to some years ago, most of the activity occurred early in the morning, but after new arrangements were agreed to with wholesaler’s markets in Spain and Italy, the opening times were adjusted, and the busiest times shifted towards the afternoon. 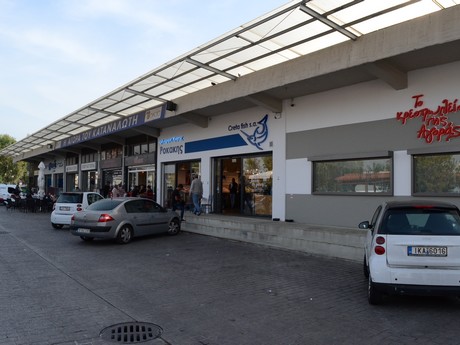 Consumers welcome
On the right behind the entrance is the office of Central Markets & Fisheries Organisation (CMFO / OKAA). This organisation controls two fruit & vegetable wholesaler’s markets, 11 fish markets and a meat market in Greece. The wholesaler’s market in Athens has a surface of 260,000 square metres and offers room to about 350 commercial enterprises. 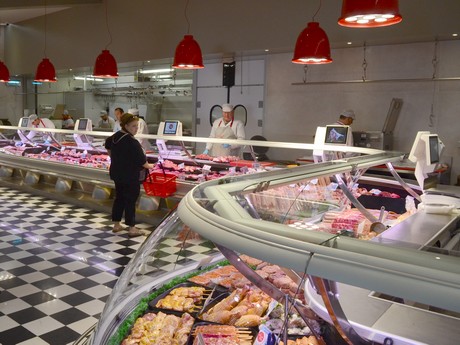 A few years ago, the organisation decided to open the wholesaler’s market to the public, in an attempt to utilise an obsolete block of buildings. On the left behind the entrance, opposite the office building, three wings were developed in 14 modern retail shops, trading vegetables, fruit, meat and fish, frozen goods, nuts, traditional products Ioannis says: “The shops in the “Consumer’s market” are open from 8 to 5, and we can report that the products are about 20 per cent cheaper than in supermarkets.” 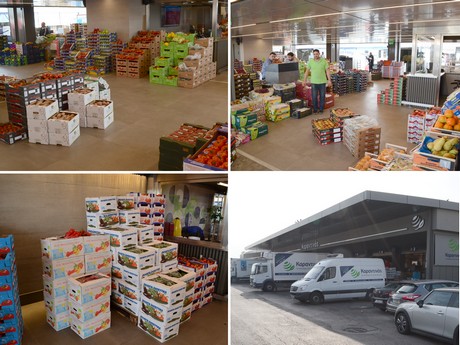 More to the back of the site, the bustling centre of the wholesaler’s market can be found. When we visit the market in November, it’s relatively calm. The market is more crowded in summer because the demand rises thanks to the tourists. On heydays, such as before Christmas and Easter, the turnover of a shop can amount to 300,000 euro in one weekend, the manager describes the crowds. 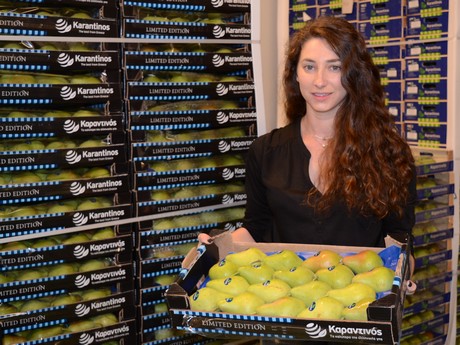 Karantinos: major importer
The market was built in 1967. Back then, each trader had a surface of 30 square metres with cold store in the basement. That old arrangement is still in effect, although some companies have multiple of these units. Karantinos, for example, has 12 of these old spaces. The company recently renovated the old building. The fruit and vegetables have roomy displays. “We have been located at the wholesaler’s market for more than 50 years,” the import manager enthusiastically says. She leads us to the cold stores below the trading floor. A steep winding staircase leads us to the lower storage floor, where several cold stores can be found. 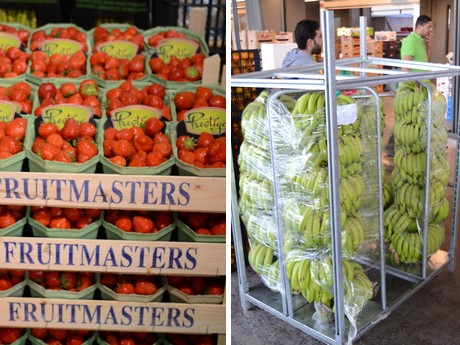 “This is a wonderful Greek apple that we sell under the Jimmy’s label,” she says, while pointing to a crate of Red Star Delicious. It’s noticeable that the cold store mostly features large sizes of top fruit. The first Greek strawberries are in a different cell. “The season started early, we received the first strawberries today.” In the next few weeks, more and more of these dark-red strawberries will be found in the cold store. Chestnuts take up the largest part of the cold store. The chestnuts are traded in various packaging and in varying sizes. 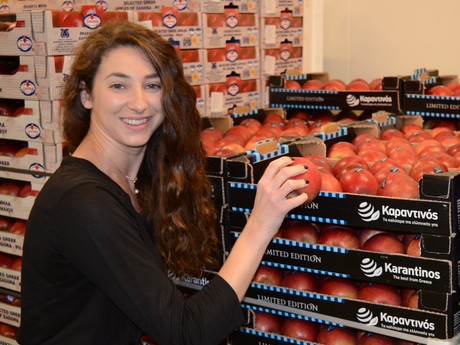 A third cell is filled with all kinds of imported products. The large number of Dutch brands stands out, but they also have supply from countries such as Spain, Italy, France and Turkey. “We mostly supply to food service and catering,” she describes their customers. Bunches of bananas are being unloaded upstairs, these come from Cyprus, where a small production of this tropical fruit can be found. 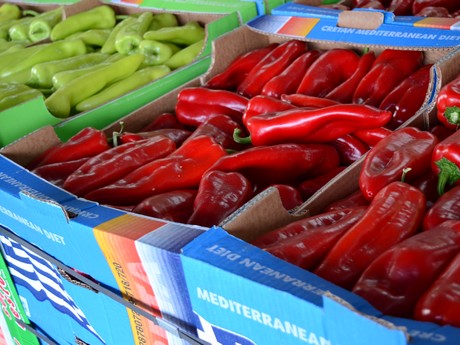 Dentakis: greenhouse vegetable specialist
Dentakis Fruits & Vegetables can be found in another block. “Eighty per cent of our turnover comes from tomatoes,” says Sotiris Dentakis. “In the winter months, we load four lorries per week.” The company trades between 20 and 25 tonnes of products every day. “We work with growers, but we also have our own production on Crete and near Thessaloniki,” he continues. The area of these greenhouses comprises a total of 100 hectares, so that we can have our own harvest every month of the year. The trader is feeling positive about the future: “Demand is increasing. We supply to restaurants, hotels and supermarkets throughout Greece.” At the end of the dock, a small lorry is being loaded with various products. “These are destined for our own shop on Santorini,” Sotiris says. Four years ago, the wholesaler opened a wholesale outlet, now responsible for the biggest part of the tourist island’s catering. 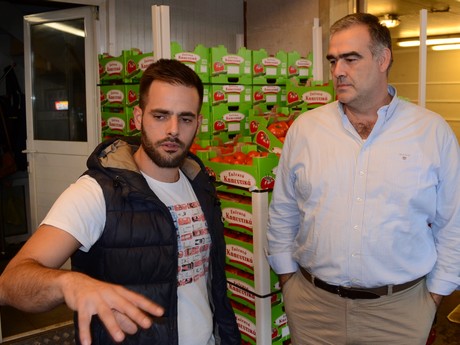 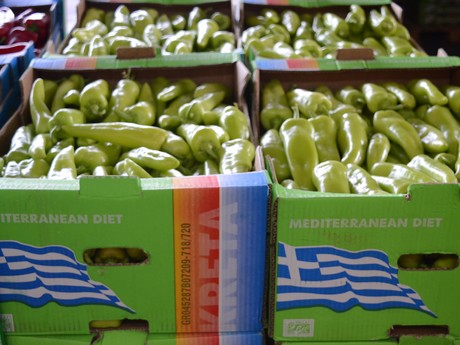 Menelaos: importer of exotics
Menelaos is located a little further along. Most of the room in a small office with a low ceiling has been cleared for trade, according to Menelaos Tzouris. “We’re specialised in specialities and import and export over long distances,” he says. “We fill the gaps in local production with import from Italy, the Netherlands and Spain. Besides, we import exotics and products that aren’t grown in Greece, such as tropical fruit and miniature vegetables.” These products are imported both directly and via the Netherlands. “Direct import is getting ever more important. When the market for a product grows, we can import directly. Additionally, we can book a direct arrival here in Athens via Dutch companies.”

Five years ago, the supermarkets were good for about five per cent of turnover, nowadays, retail is good for about a quarter of turnover. Since the crisis years, the sector has been shaken up quite a bit. A few large chains had to close shop, but on the other hand, German chain Lidl is growing. The supermarkets are also passing by the markets in Greece, but Tzouris mentions a remarkable study of a few years ago: “Greek consumers are the most satisfied with the fruit and vegetables they buy, but they mostly buy their fruit and vegetable at markets. The Danes are the least satisfied, they mostly buy fruit and vegetables in supermarkets.” He also sees a new trend emerging: niche markets. “Asian vegetables, for example, are difficult to find in supermarkets.”

The company can be found at two locations on the wholesaler’s market, and they have a total of 11 units of 30 square metres. “We have a cold store downstairs, but that’s for filling up stocks, and not for longer term storage.” The company’s proper stocks are divided across three companies around the capital that offer cold store. 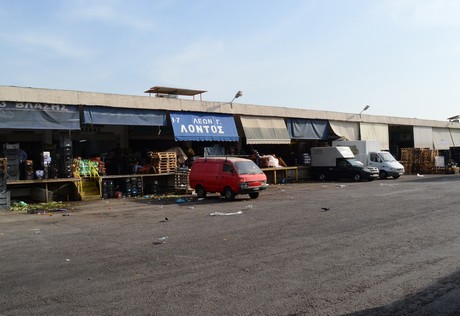 New building and plans to renovate
Ioannis says OKAA has the ambition to build a large cold store at the edge of the site to meet demand from traders. “We’re working on getting that permit, because it’s impossible to organise the storage in the vicinity of the wholesaler’s market. Prices for real estate are high, and nothing’s available,” he explains. Additionally, there are plans to renovate the market’s company spaces. The location of the wholesaler’s market, near the centre but also near the logistical connections, is a major advantage of the market. The port of Piraeus is close-by, and the national highway network can be accessed via the approach road at the back entrance of the market. “Congestion is a problem, but we provide a logistical service by transferring goods from large lorries to smaller vans.” 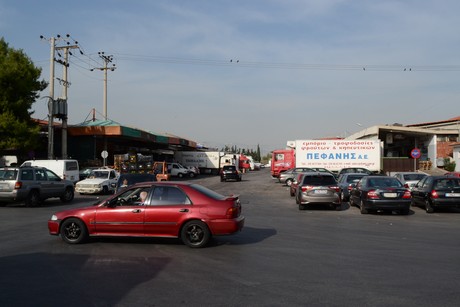 Besides the Greek capital, the market is also the centre for supplying the Greek islands. “Ninety per cent of the Aegean Islands are supplied via Athens. It’s calmer now, but it’s much busier in the summer months.” He exemplifies: in November, the market has 300 tonnes of waste per month in total. In July, that amount is much higher with 800 tonnes. “We are running programmes with universities to find out how we can get value from the market’s waste.” There’s definitely a future for wholesaler’s markets, according to Ioannis, although traders have to be willing to change along with demand. “I think fewer, but larger, companies will be established at the wholesaler’s market in ten years.”