"No prunes this year due to high gas prices, but there will be almonds and walnuts"

Plums, apples, and grapes are undoubtedly Moldova's top fresh produce export products. Walnut, almond, and hazelnut production is less well-known. That might well change in the coming years - Moldova's climate and soil are perfect for these types of trees. Prometeu-T, a cultivation and processing company based near Chisinau, has been specializing in nuts for many years. 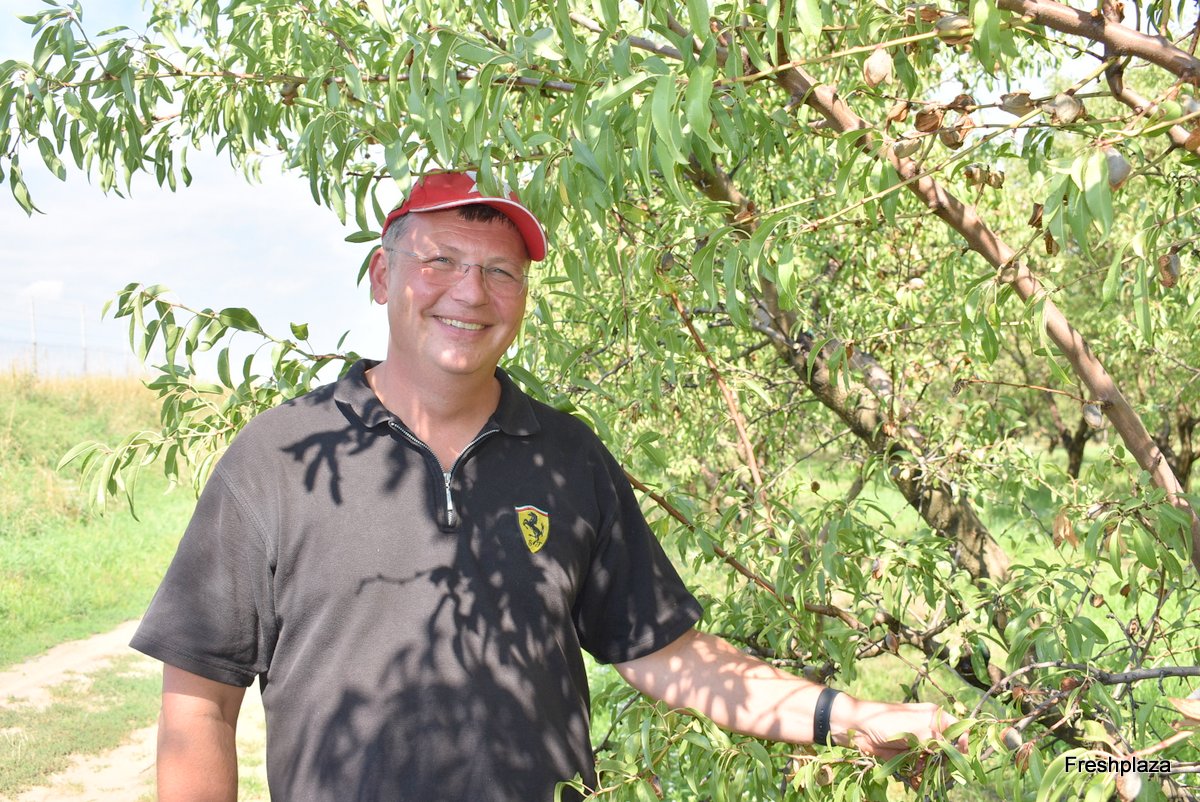 "We planted our first walnut tree orchard in 2001," begins Fjodor Slanina, Prometeu-T's vice president. "Agricultural engineers who'd made their name in the Soviet era advised us. But, we'd have fared better consulting growers in countries like France or the United States. We had a beautiful forest, but one that was, sadly, unproductive."

Monoecious trees
Fjodor explains that pollination is walnut cultivation's biggest challenge. "A walnut tree has male and female flowers, but they don't bloom simultaneously. At least five percent of your orchard must be of a variety whose male catkins bloom exactly when the female flowers of your main variety bud. We didn't take that into account at first. By now, everything's going fine, and we have 16 hectares of walnut trees, 10 of the American variety Chandler. The Moldovan varieties only start producing after seven to ten years. We've had the Chandler trees for five years now, and we had some yield last year already."

As far as the eye can see, new plantations of walnuts

Nuts must be cracked
According to this nut grower and exporter, they get, at most, four tons of unshelled nuts per hectare. Of that weight, 40-45% is kernel, which ultimately amounts to about 1,600 kilograms of finished product per hectare. "Global competition is stiff. Walnuts, which grow wild in Moldova along the roads and in forests are producing aroung 35% in average. Franquettes and Chandlers grown in our orcahrds bring yild around 40-42%. In US and Chile Chandlers bring betwen 45 and 55% yild. Sometimes in specific conditions it can be 60% but very rare, " says Fjodor.

"And it seems China has some new varieties with thin, easy-to-crack shells that contain up to 65% kernel. Plus, China markets its product cheaply, and you can plant the trees just about anywhere in the country. A walnut tree isn't a demanding one. Transportation used to be via containers that were at sea for 45 days before reaching Europe. They've recently begun using the railways, thanks to the Belt and Road Initiative. That takes only a fortnight."

Globally, walnut consumption has increased dramatically in recent years. People have become aware of this nut's healthy properties: it is a source of, among others, vitamin B1, phosphorus, zinc, iron, potassium, and magnesium. That raised awareness is thanks to the efforts of particularly the International Nut and Dried Fruit Council (INC). "No one knew Chilean walnuts 15 years ago; now, it's a premium product. Chilean walnuts are beautifully white; our product is slightly darker but certainly no less tasty. If we want to maintain our export market position, we should, perhaps, start looking out for new varieties. Moldova has, incidentally, been a net walnut exporter for about a hundred years," Fjodor continues. 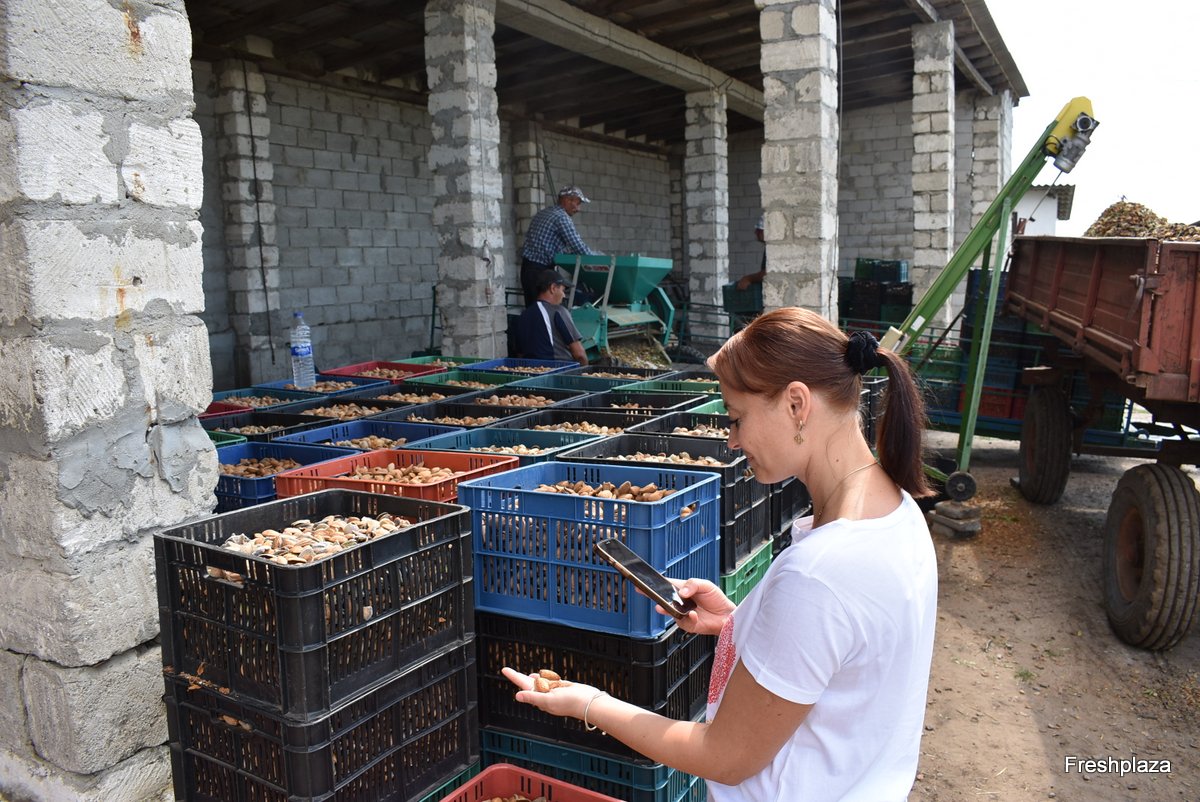 Production and export figures
FAOSTAT stats show that, in 2019, worldwide walnut yields totaled nearly three million tons, a third of which came from China. The United States produced 594,000 tons, and Iran 321,000 tons. Turkey, Mexico, Chile, and Ukraine recorded yields of between 100,000 and 250,000 tons, while several other countries, including Moldova, harvested between 15,000 and 50,000 tons. TradeMap figures show that, with 2,573 tons, Moldova was 15th in the export rankings regarding shelled walnuts. Here, the U.S took the crown with nearly 160,000 tons, followed by China and Chile with about 75,000 tons each. But if you look at the shelled product, this small Southeastern European country ranks quite a bit higher: with 15,836 tons, it only trails five other countries. Again, the U.S was the undisputed leader with exports of about 122,000 tons, followed by Mexico with 55,000 tons and Ukraine with 40,000 tons. Almonds are stripped of the outer shell

In other words, Moldova is strong in processed walnuts, and Prometeu-T has a significant share of this. "We use machines to crack the nuts, then sort out the kernels. We guarantee 99.9% purity," Slanina explains. "Our exports usually start in mid-October. We weren't able to sell much these past two years; the first year, it was too cold, and last year it rained too much during the flowering period. The bees couldn't do their job properly. This year's crop looks good. -  this is for almonds. Wanuts do not need insects for pollination. There's an additional problem on the trade front. Prices are volatile, and while contracts are usually drawn up in euros, the Moldovan economy is strongly linked to the dollar. With the current dollar-euro exchange rate, that's not in our favor."

Almonds, hazelnuts, and sunflower seeds too
Prometeu-T grows almonds too. "This cultivation is relatively new in Moldovan horticulture. The first trees were only planted in the late 1990s. Nevertheless, it's doing extremely well in our country, especially in the south. The north gets less sunshine in the summer. We have a 31-hectare area, which we planted in 2005, making us one of the first companies in Moldova to do so. Just over half are still old trees; the rest are young plantings that will come into full production in the next few years," Fjodor says. 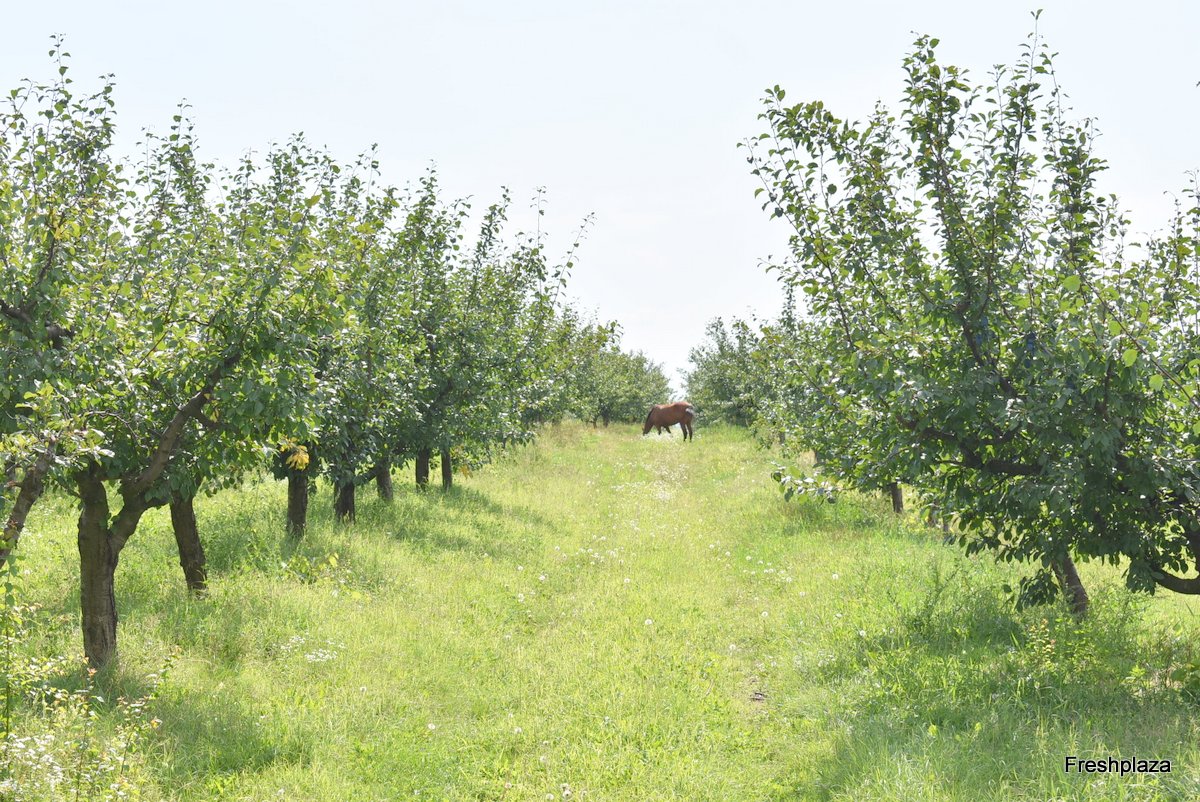 An employee's horse grazes between the fruit trees

"We don't grow hazelnuts, but we can use our almond processing line for these nuts too. We processed a ton for a fellow grower, and he was well pleased. He used to have ten people shelling a kg each a day. He would, thus, get 100kg per day. Using our line, we can easily do a ton. The product is also sorted, so it can be supplied entirely shell-free to buyers. Many growers are interested in growing hazelnuts but don't have processing lines. We can help with that. We also buy sunflower seeds from both small and large growers and shell them for export. The husk is processed into heating pellets. None of the product goes to waste."

Prunes
However, the largest acreage at Prometeu-T is reserved for plum cultivation. Yet, unlike most other Moldovan growers, they do not sell this product fresh. As with nuts, the company tries to provide the market with a value-added product. In this case, through a drying process. "Before the Russian embargoes some seven, eight years ago, we sold our entire 55 hectares of plums to that fresh market. We didn't export them ourselves but through brokers. When that option temporarily disappeared, we looked for a way out and found it in exporting prunes to Europe. We only process our own plums. In 2018, we had a harvest of as much as 1,000 tons," Fjodor explains.

This cultivation and processing company dries two plum varieties: Stanley and Blue Free. "Blue Frees are rounder and bigger, but Stanleys are more flavorful. This year, our Stanley plums reached a Brix value of 18. We harvest them using two tree shakers that we also use for the almond trees. Almond trees are solid, sometimes damaging these machines. Still, it costs less to repair them than what we'd spend on labor if we were to harvest the almonds manually."

"Ten years ago, we were still using 200 people for harvesting, and four truckloads of fresh plums would leave daily to the Russian market. That's almost impossible now, especially in the area around the capital, where we're located. Fresh plum prices are too low for us to match EU picker wages. Drying is more profitable. This year, however, because of the high gas price, we reverted to selling the plums fresh. We managed to find just enough workers for manual picking," Fjodor concludes.

Prometeu-T began in 1994 as a walnut processing and export company. Fjodor's father, Tudor Nicolae Slanina, who has been Moldova's Trade Minister for the two previous years, founded it. In 1995, they dispatched their first truck to the Netherlands. Trips to countries like France, Italy, and Germany, soon followed. Prometeu-T ships 99% of its production to overseas customers; all its direct exports are to the European Union. Only ten percent of its processed nuts and fruits come from its own 120-hectare orchards; they source the rest from partner growers. The company has been a member of the International Nut and Dried Fruit Council (INC) for a decade and has extensive modern machinery for nut cracking and (optical) kernel sorting.