Data of the organic sector presented at Sana 2022

In 2022, 89 percent of Italian households bought organic at least once

Italy remains at the top of the organic sector in terms of share of agricultural area, operators and exports. However, many are the changes affecting domestic consumption. This is a crucial moment for the organic sector. On the one hand, there are the effects related to the pandemic, on the other hand, the Russian-Ukrainian conflict and inflation, which contribute to outline an evolutionary scenario that is impacting the Italians' consumption trend.

These are some of the evidences contained in the Sana 2022 Observatory, presented yesterday as part of the Bio Revolution 2022 event held until 9 September at Bologna Fiere. 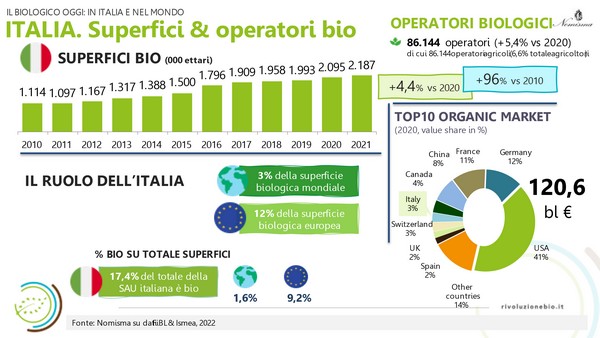 Counting nearly 2.2 million hectares, Italy has the highest percentage of the total Italian UAA (17 percent), compared to the EU average share that is still stuck at 9 percent and far from the 25 percent target included in the Farm to Fork strategy for 2030.

Organic food sales in the domestic market (household and away-from-home consumption) have reached 5 billion euros and account for 3.5 percent of global organic retail sales. What is driving the growth of the market is out-of-home consumption, which has exceeded 1 billion euros, marking a growth of 53 percent compared to 2021 thanks to the dynamics of both the catering-related component (+20 percent) and the commercial catering component (+79 percent). 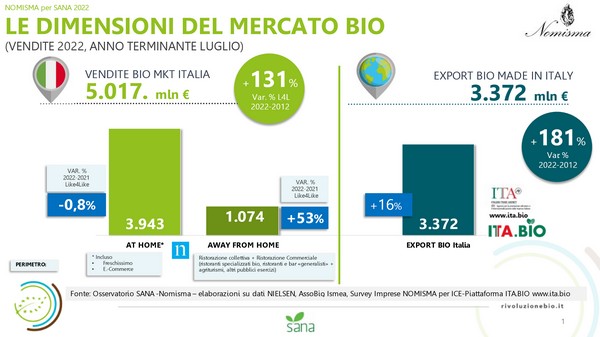 In contrast, domestic consumption, shows a slight decline after years (-0.8% in value compared to the same period 2021).

Very different trends depending on the channels
What has seen most consequences is the network of specialty stores, which shows a setback (-8% compared to the same period in 2021). The Modern Distribution management remains the first channel for Italians' organic purchases, weighing 57 percent of total sales related to Italians' domestic consumption. In 2022, organic sales in the channel stand at 2.3 billion euros (+0.4% compared to 2021). Other channels (direct sales made in markets and companies, fair trade buying groups, for example) are growing by 5%. 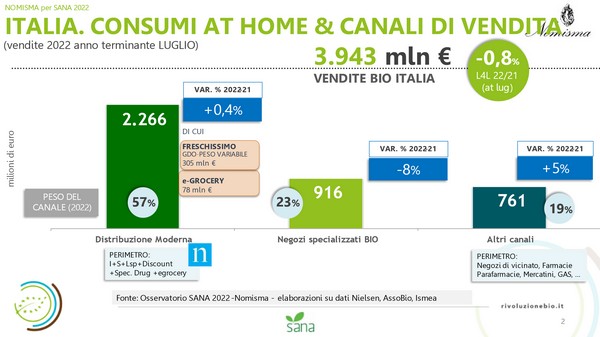 When examining the categories of organic products by fixed weight most sold within the Modern Distribution, fruit and vegetables count for 13% of total value sales, compared to 20% for cheese, cold cuts, yogurt and eggs, and 57% for pasta, baked goods, preserves, and sauces. There is a slight increase in organic fruit and vegetables (+3% year ending July 2022 - Source Nielsen), although at lower rates than the sector among the total agri-food industry (+6%).

The organic made-in-Italy brand increases in exports
Compared to last year, Italy's organic exports have kept up their momentum. In 2022, sales of Italian organic agri-food products on international markets reached 3.4 billion euros, setting a growth rate of 16 percent (year ending June). The recognition of organic made-in-Italy brand on international markets is also reflected in the long-term growth (+181% compared to 2012, a value almost tripled) and the export share (weight of 6% on total Italian agri-food exports in 2022 compared to 4% ten years ago). 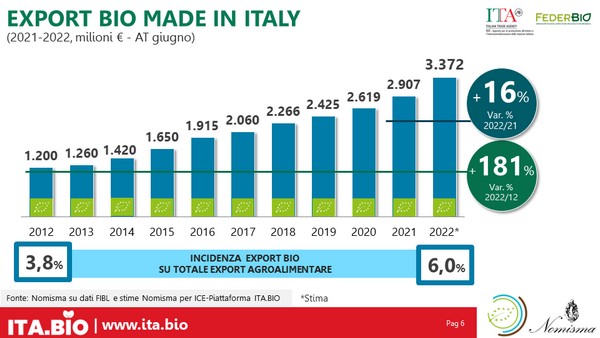 As for the markets covered, the survey conducted between July and August 2022 by Nomisma for ICE Agenzia and FederBio on a sample of 290 Italian food and wine companies, showed that the main destinations in Europe for Italian organic food are Germany (indicated overall by 63 percent of companies), followed by France (46 percent) and Benelux (34 percent). Outside the EU borders, Switzerland, the United States and the United Kingdom are the top countries.

What about the future? According to companies, the most promising countries for organic food exports in the next three years will be Germany (56 percent), Nordic countries (32 percent) and the United States (25 percent).