At this time of year, when the temperatures are climbing (already reaching over 30°C in the northern parts of South Africa), pepper volumes on the market start waning.

Winter producers are nearing the end of their season from pepper blocks planted in January and February, while summer pepper producers will be coming on the market towards the end of October with the new season's peppers.

Growing conditions in Limpopo were very difficult, with late rain even up to May. Growth and color development were slowed by many overcast days, even if the area had a mild winter with no frost damage.

Yields weren't great, resulting in the current tight volumes on the market. Sunburn to peppers during the past two weeks further shaved off volumes. 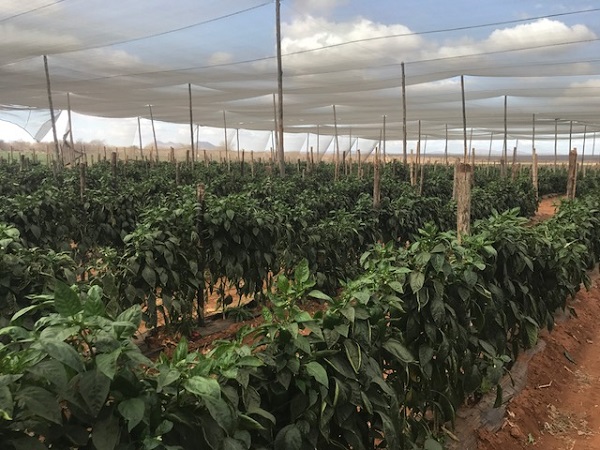 What's the effect of record prices on next year's winter campaign?
A pepper producer north of the Soutpansberg remarks that the wholesale prices they received earlier this week were higher than anything they've ever received for green peppers: R150 (8.7 euros) for a box of 5 to 6kg of large green peppers, R120 to R130 (7.6 euros) on a box of medium peppers.

"But we'll see what happens tomorrow," says Tinus Venter of Janlouis Boerdery in Mokgalakwena. "Last week, it was R120 on large and R100 on medium."

According to fresh market analyst AMT, pepper prices are, in general, 140% higher than last year this time, while pepper volumes are 20% lower than a year ago. Red peppers, too, hit record price levels of over R47 (2.75 euros) per kg.

Tinus observes that the prices that sweetpeppers obtained this winter could very well induce many more sweetpepper plantings next year, which, particularly if growing conditions are favorable, could result in an oversupply.

"And then as good as this season has been, next year could be the opposite. The next season is going to be interesting."