Unsatisfactory prices will have unforeseeable consequences for crop year 2023

Pfalzmarkt für Obst und Gemüse has come to a mixed balance of this year's asparagus season. Compared to 2021, there was a significant decline in the key seasonal figures: At just over 3 million euros, sales are significantly lower than last year (3.5 million euros), while the sales volume actually increased slightly from 750,000 kg (2021) to around 767,000 kg by the traditional season finale on St. John's Day.

Karl Völcker, head of the asparagus office at Pfalzmarkt: "These results hurt us in several respects. Due to the massive drop in producer prices, most Pfalzmarkt asparagus producers pulled the emergency brake after Whitsun and stopped harvesting early. Without this harvest break - which is necessary for our producers from a business point of view - we could easily have had 20 to 30 percent more asparagus available." 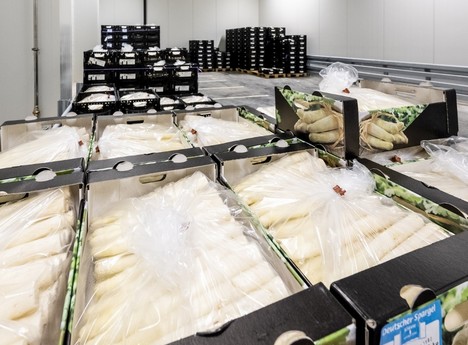 Economically necessary harvest stop after Whitsun
The supply shortage achieved by the harvest stop ensured that producer prices for asparagus recovered somewhat in the last two trading weeks, in June. Due to the insufficient harvest quantities of the asparagus producers at Pfalzmarkt eG, it was no longer possible to supply the food retail trade. Mainly wholesale markets were supplied. In 2022, the asparagus season at Pfalzmarkt eG ended about a week earlier than in recent years. On June 16, the asparagus business at the trading platform in Mutterstadt was cleared.

Season started around three weeks earlier than in 2021
In spring, the omens for the season had still been very good. A mild winter with little frost and rested crops meant that growth was early and good yields could be expected. In 2022, the harvest of the first "Palatinate spring asparagus" at Pfalzmarkt eG began earlier than it had for a long time: Compared to the previous year, Germany's market leader for home-grown fruit and vegetables started the asparagus season about three weeks earlier in mid-March.

Simultaneous foreign supplies put pressure on producer prices
What worked against the "early start for asparagus" was that Spanish and Greek asparagus arrived on the German market relatively late, coming in almost simultaneously with the early goods from the Palatinate. This created a persistent oversupply in supermarkets and led to a massive drop in producer prices. The situation was particularly catastrophic for green asparagus nationwide. Since three major chains offered only foreign produce, consumers could not opt for fresh and sustainable green asparagus from Germany itself. The war in Ukraine and constant reports of price increases also unsettled consumers.

Unsatisfactory price situation
Consumer sentiment toward the supposed "luxury product" asparagus was curbed. In addition, many consumers increasingly turned to supposedly inexpensive foreign produce. Average producer prices for asparagus were consistently below those of the previous year until the end of May. The cost pressure that - in view of the exploding costs for diesel, fertilizer and packaging, etc. - has weighed and continues to weigh on the producer companies of Pfalzmarkt eG is immense. Karl Völcker goes on to explain: "This led to an unsatisfactory profit situation, because actually the growers should have achieved around 30 percent higher producer prices for asparagus to cover the costs of the additional expenditures."

At Pfalzmarkt eG, many of the 30 asparagus producers pulled the brake after Whitsun and stopped harvesting completely. 2022 was a difficult asparagus year for growers with farm stores as well. For example, while in the previous two years many consumers took advantage of the pandemic-related lockdowns to buy directly from growers, record high fuel prices put a stop to this positive trend in the spring. "The consequences for the coming crop year cannot now be fully predicted. If the unsatisfactory price development for growers persists - regarding other crops as well- we expect a decline in acreage," says Karl Völcker.