The upcoming Belgian top-fruit season will probably get off to a challenging start. That is what Vergro's Dominiek Noppe predicts. "I think it's going to be a fairly gloomy start. It's difficult to estimate exactly how much is left on the market. However, the surplus is expected to carry over into next season, putting prices under pressure," he says.

That is in stark contrast to last season. "Then the annual contracts had to scramble to meet supply. That will certainly not be a problem when the next season begins. The situation in Eastern Europe, of course, means trade has been stagnant for a while. That's caused some fruit shifting, especially in the Netherlands."

"The Belgian market was quite empty on July 1. However, in the Netherlands, which is usually empty, there's still quite a bit of supply left. There's simply no longer a market for the Class II pears, and that's costing everyone dearly," Dominiek continues.

Red Modoc
Those difficulties are, for now, not affecting Vegro's Red Modoc pears. These blood-red pears are exclusive to this exporter who supplies it all to Lidl. "Red Modoc pears are becoming increasingly popular. This year, we went from 45 to 50 hectares of cultivation in Belgium and six to ten hectares in Germany. That, of course, includes many young trees that aren't yet produced. So, there's still far more demand than supply, but in the coming years, we'll increasingly be able to meet the rising demand."

The goal is to reach 200 hectares within the next ten years. "There's definitely room for this pear in the market," says Dominiek. The Red Modoc's blood-red color, which it retains, and delicious flavor are distinctive, he says. But its biggest advantage is its storability.

"You can keep it in the fridge for a year, and, after all that time, it won't have lost any quality. Those characteristics make the Red Modoc unique. This year, the quality is excellent again. Actually, the quality is top-notch across the board. We expected some frost damage, but it's not too bad. Still, we're not at the end of the road yet; a lot can still happen." 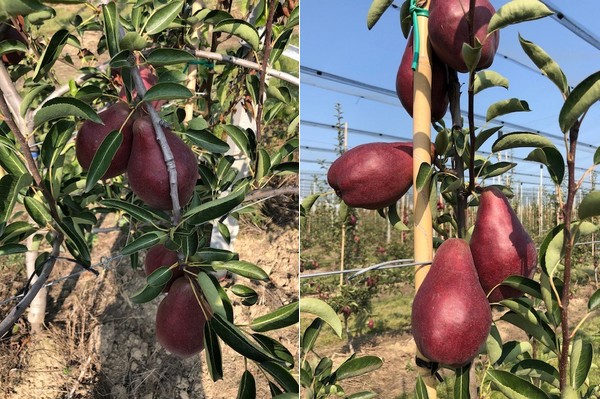 Tomatoes
Tomatoes are another of Vergro's important product groups. "Things went genuinely great in May and June with these. I thought it would be much worse, especially in June. There are currently far more greenhouse volumes than in other years, yet the prices have managed to hold up relatively well," explains Dominiek.

Demand from Southern Europe is a significant reason for this. "The heat waves there may just have been our salvation because their supply is somewhat lacking. We can thus sell large volumes there. Were it not for that, the market would be overflowing."

New cooling center
This Belgian exporter is also keeping an eye on the future and will be using a new cooling center when the new top fruit season starts. "We took over Jacobs Koeling, where, starting next season, we'll be able to store 10 million kgs of fruit in cold storage. Naturally, we'll inaugurate the building with a party for all our current and potential growers on July 30," concludes Dominiek.