Although the export season for Spanish early potatoes will only really get going in a few weeks time, the first plants of the loose-skinned variety in the Seville growing region have already been cleared.

According to initial price indications, the prices at the end of the season are around 60 euros/dt. However, capricious weather, with persistent drought in January and February and subsequent rainfall, is causing problems for early potato growers, Georg Kolmhofer (r) reported. Kolmhofer, who was born in Austria,

has been living and working in Spain for about two decades and has been the sole managing director of the export company SESUR Semilla y Exportación SL, based in Seville, for several years. 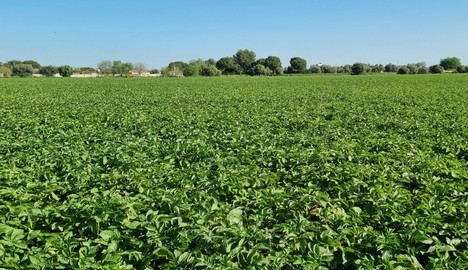 From week 19 onwards, the company will start harvesting larger quantities of firm potatoes, with deliveries taking place in week 20.

Early potatoes in the Seville area will be staggered this year. A small part of the area was already planted with early varieties before Christmas. Rain fell during the Christmas holidays and the remaining area was planted in early-mid January. "Both January and February were then very dry with very low night temperatures between 0 and 5 degrees and relatively high daytime temperatures around 20-25 degrees. The early areas developed quite well, but growth in the remaining areas was slowed down due to the low night temperatures," Kolmhofer says, looking back.

Lower tuber set
March and the first half of April, on the other hand, were characterized by rainfall and storms, he says. "The ground is literally flooded: in Murcia and Cartagena, where early potatoes are mainly produced for the domestic market, there has been record-breaking rainfall of up to 500l in some places, and 150l in Seville. Nevertheless, this year we have to expect a lower tuber yield per perennial. Normally there are 10-15 tubers/plant, this year there is an average of 5-8 tubers/plant. The early potato crop in Seville has seen a manageable 10% reduction in area, but in total there will be an overall 30% reduction in volume compared to last year. Accordingly, it would also be conceivable that certain quantity agreements could not be adhered to," Kolmhofer describes.

The company SESUR Semilla y Exportación SL mainly deals with the export of early potatoes from its own production in Seville and southern Portugal, as well as the logistics and services around it. Furthermore, variety trials are carried out on a large scale in close cooperation with well-known and medium-sized potato breeders in Europe. Kolmhofer: "Due to improved storage technology and a sophisticated range of varieties in northwestern Europe, Spain's potato acreage has been reduced considerably in recent years. Nowadays, the marketing window covers only 3-4 weeks from about mid-May to mid-June. Germany continues to establish itself as our most significant market."

The yields of his contract growers go primarily to the well-known food retail chains, Kolmhofer continues. "Israel as well as Egypt are our biggest competitors in the export business; in addition, we are also in direct competition with alternative goods from Lower Saxony and France. Each individual retail chain has its own rules of the game in this regard, in terms of switching from store potatoes to early potatoes." 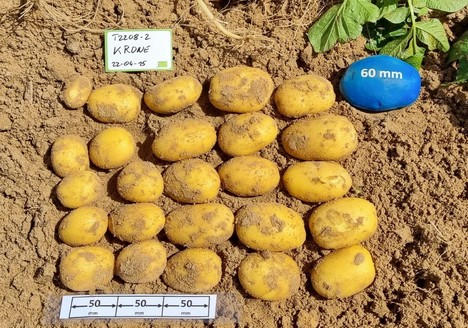 Time-critical business
Finally, according to Kolmhofer, logistics availability and possible strikes in the transport sector will also play a decisive role. Especially for a time-critical product like early potatoes, slight delays during the supply chain are disastrous, he said. "Storage capacities are hardly available to us, which is why the freshly harvested product is immediately sent for export. Accordingly, we also hope for good weather conditions during the early potato harvest. Because if it goes towards 30 degrees, it already becomes critical for the sensitive early potatoes."