The Euronion congress revealed how almost all nations are increasing the areas destined to onion cultivation. Italy was not included in the data, as it lacks the aggregation to provide a real-time overview of the situation, however an area of 12 thousand hectares is plausible, producing around 430 thousand tons from north to south, including maybe bunching onions. 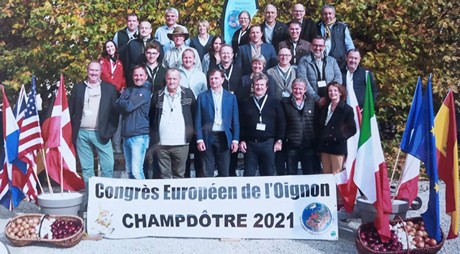 Official photo (photo provided by Matteo Freddi, second from the right in the second top row)

"Climate change is affecting production, sometimes hitting the entire nation and other times just one area. What is certain is that the negative events are more and more frequent."

Demand from some African countries, especially in the west of the continent, is increasing. Among the European countries, the Netherlands have increased their exports starting from week 40. Production in dropping in Ukraine and in other Eastern European and Asian countries.

Consumption in the restaurant industry is gradually going back to normal.

Onion prices increased last year in India as quantities were below expectations (also due to climate change) and imports were restricted. Harvested quantities dropped in Brazil and Argentina too, so the European Union should look more closely at exporting to South America and India.