With the Northern Territory looking to develop its horticulture production, a trial of growing disease-free ginger is yielding some positive results after the first round of harvesting was labelled a success.

The Northern Territory Government’s notes that the Australian ginger industry has a farm-gate value of $32M and is currently concentrated in south-east Queensland. The Department of Industry, Tourism and Trade’s Director of Plant Industries, Dr Matt Hall says there is a great opportunity for the Territory's growers to diversify into domestically grown ginger, as Australia imports around 220 tonnes of the fresh product per year.

"The main established horticulture crops are mangoes, watermelon and vegetables, but they are still on a small scale compared to other states," he said. "So, we see an opportunity to displace imports, for either the fresh market or we were also looking at supplying clean seed material back into Queensland. But we see ginger as a high-value commodity, and we are a long way from the markets, so anything we grow preferably needs to have a higher value to justify the transport costs."

Photo: Mic Jakobi inspecting his growing ginger crop at the start of the year (March 2021).

The project has been underway for two and a half years and is also focused on understanding the best conditions to grow the Queensland Gold and Canton ginger varieties. Dr Hall says apart from any commercial value, a main part of the trial is also addressing diseases that have impacted some growers interstate.

"Initially we did some work on our research farms, really looking at propagating ginger using tissue culture," he said. "That's really in response to some of the issues they are having in South East Queensland with Pythium and Phytophthora, which are two fungal or microbial diseases. So, we are using tissue culture and a particular technique to make sure the rhizomes are clean and free of pests and diseases and that they will grow in the Northern Territory environment. We are looking at two things; one was a bag system like in a nursery, and the second one was out in the field as a normal broadacre crop. We have had more challenges with production in the field - we can get there, but it takes more time and effort. But we want to make sure the material is clean and free of disease, particularly these two."

The department has been working with a local grower Mic Jakobi who has been growing ginger in a shade house setting, with clean seeds developed from the tissue culture. He has been through one full cropping cycle, and Horticulture Extension Officer Dallas Anson says productivity has been quite high.

"He harvested in excess of a tonne of ginger, from an initial planting weight of 66 kilograms," she said. "That's right up there with some of the best producers in Queensland using a field-based system, in terms of converting to a tonnage per hectare value. One of the main things he noticed in the post-harvest assessments is that he would probably want to focus on the Canton variety in the future, he believes that is the better product to sell into the markets." 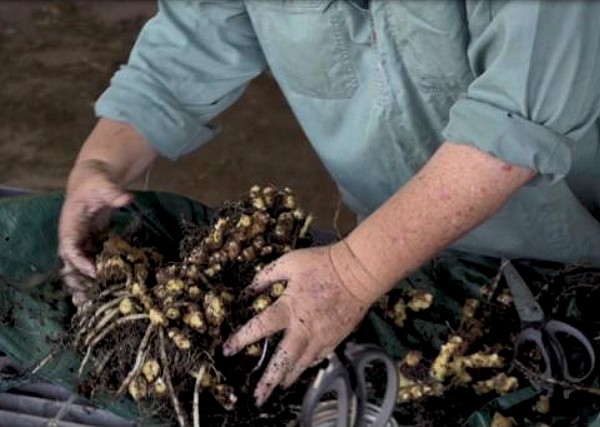 Photo: The fresh ginger being harvested.

Another finding has been that the plant matures quicker than in Queensland, and Dr Hall says there is a competitive advantage in that Northern Territory production can get the same level of production in a shorter time span, but importantly reducing the disease pressures. This provides an attractive option for producers who want to diversify from their main crop to increase their income.

"There is a desire by Territory farmers to look at other options where they can use their land, soil and water resources to create value," he said. "It's pretty essential as the value of our plant industries is around $340million as an aggregate across different horticultural and cropping areas, so still very small. For comparison, the Australian banana industry is valued at $437million. There is also an export hub that has been commissioned in Darwin near the airport, and there is also interest in sending some of our ginger product to South East Asia, particularly Singapore or Hong Kong."

It is believed that ginger grown in the Territory could attract premium prices for clean seed ginger, up to $25kg, and Ms Anson says there are plenty of uses for the ginger, from the fresh market to the value-add processing industry.

"Mic would like to capture both and I think that there is a lot of opportunity for what he considers to be the processed-grade ginger, which is sent to the breweries, fresh juice bars, distilleries, as well as a couple of restaurants," she said. 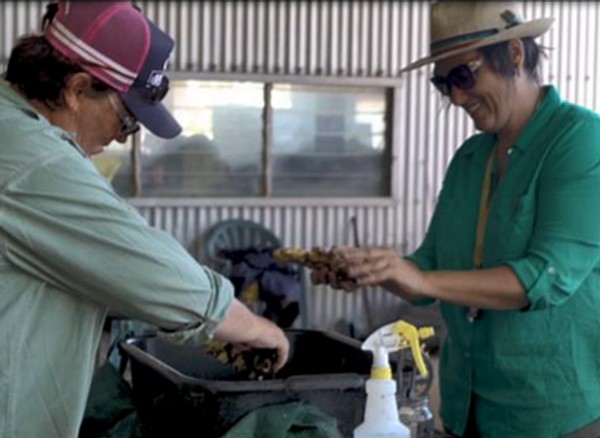 "In terms of the premium grade, the rhizomes would definitely retail up there with fresh-produce quality. They look exactly like what you find on the supermarket shelf. We definitely have several producers in the Northern Territory who are interested in incorporating ginger into their other crops. We are also looking at perpetual growth in Mic's system; given that we can produce ginger faster than in Queensland, there is a huge opportunity to produce it during their off-season (January-May). Mic would like to go one step further and produce it year-round, so he is harvesting on a monthly basis. He's very much focused on delivering a high-quality product to fresh and processing markets."

Mr Jakobi, who is also involved in the diversification of other agricultural crops such as Black Sesame, industrial hemp, Millet and Sun Hemp is preparing for his second round of ginger plantings as part of the next stage in the trial in the coming weeks.