Best rain in years over Klein-Karoo

"I can't remember when last we saw so much rain," remarks an Oudtshoorn resident of the 46mm she measured over 24 hours at the end of last week in Oudtshoorn.

Farmers report that seasonal rivers that dried up seven years ago, some longer, have sprung to life again.

Farmers have shed tears of relief at the rain, reports Daily Maverick, in a region for which serious warming is predicted in climate change models. The Klein-Karoo is known for its stonefruit production, but many orchards have been removed over the past few years as growers ran out of water to keep them alive. 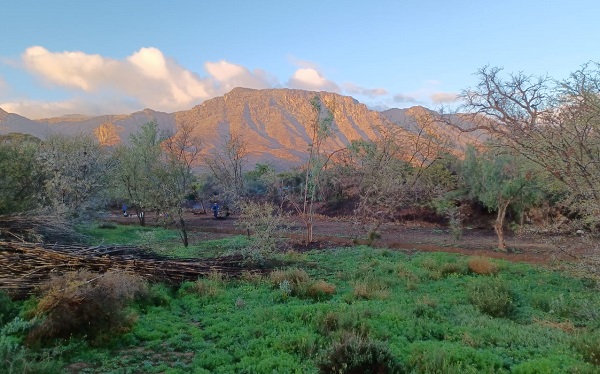 The Klein-Karoo has been in the grip of drought for several years now but it seems that the region might have entered a new climate cycle; the recent rain was reportedly the best some Karoo towns have had in between seven to nine years.

“Temperature is fairly straightforward,” Prof Stephanie Midgley, scientist responsible for climate change and risk assessment at the Western Cape Department of Agriculture at Elsenburg and Extraordinary Professor in Horticultural Science at Stellenbosch University, said earlier this year. “There is clear evidence that South Africa has been warming. In future, the southern parts are projected to experience milder warming, with more serious warming expected as we go inland to the Karoo."

The rain over the Karoo was caused by a trough of low pressure over the northern Karoo down to the Garden Route, which has also had heavy rains.

Effective rain over the Breede River Valley has pushed the dams of the Western Cape Water Storage System to just over 100%. The Theewaterskloof Dam which dropped to 27% full in 2017 is now 102% full.