Potatoes are "hot" - harvest is in full swing

"The potato harvest is in full swing. Conditions are mixed to good, depending on the region and weather conditions," says Thorsten Riggert, who hopes for a good harvest for the Lower Saxony potato farmers. September not only marks the beginning of the potato harvest, which can go until mid-October depending on the variety, but it is also the month in which the popular potato festivals were held in numerous places before the Corona era.

"We hope that with the return of the folk festivals and further opening of gastronomy, people will eat more of our delicious potato in all its varieties and thus consumption will increase again," the farmer from the Heide region tells Landvolk-Pressedienst. 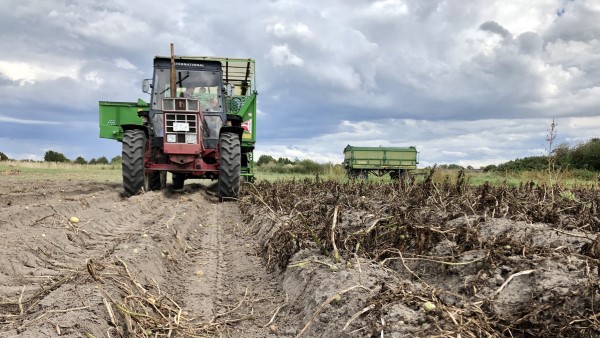 Lower Saxony's farmers produce nearly 50 percent of Germany's potatoes on 115,400 hectares in 2021. Across Germany, potatoes will be grown on just over 259,000 hectares in 2021, according to preliminary data from the Agrarmarkt-Informations-Gesellschaft (AMI), which represents a 4.2 percent drop in acreage compared to 2020, when potatoes were grown on 273,500 hectares. "Lower Saxony's potato acreage has also shrunk by almost 7,000 ha compared to 2020," Riggert said, citing last year's acreage of 122,200 ha. However, even more potatoes will be grown in 2021 than in the drought year of 2018, and the yields at that time can easily be topped this season, Riggert suspects.

According to the Kartoffel-Marketing-Gesellschaft (KMG), the great tuber is by far the best seller in German stores. "The potato is undisputedly the star. German citizens consume over 64 kilograms per capita - as a side dish to meat dishes, but also as a vegetarian or vegan superfood," Riggert enthuses about the nightshade plant, which contains virtually no fat, plenty of fiber, protein, vitamins and minerals.

During the Corona pandemic in 2020, the potato experienced a real boom in Germany compared to 2019. With 146,000 metric tons (t), private households purchased the largest quantities of table potatoes in both March 2020 and March 2021, with 147,000 t. According to AMI, demand dropped somewhat in 2021, but it was still above pre-Corona levels at 97,000 t for all but the month of August. Promotions by food retailers turned the tide, resulting in more potatoes sold in the 31st calendar week than at any time since late May.

"The courting of potato sales continued in September, and we hope the market will continue to develop positively," says Riggert, who represents potato growers at UNIKA, the Union of the German Potato Industry.