“This year, the onion calibers will be smaller”

Last week, 8 of the main operators of the onion market came together to take a look at the campaign so far. “Together, these 8 operators represent about 50 to 60% of the French market, which enabled us to draw a reliable report on the overall situation in different geographical areas of France,” explains Dominique Viel, sales and marketing manager at Ferme des Arches. 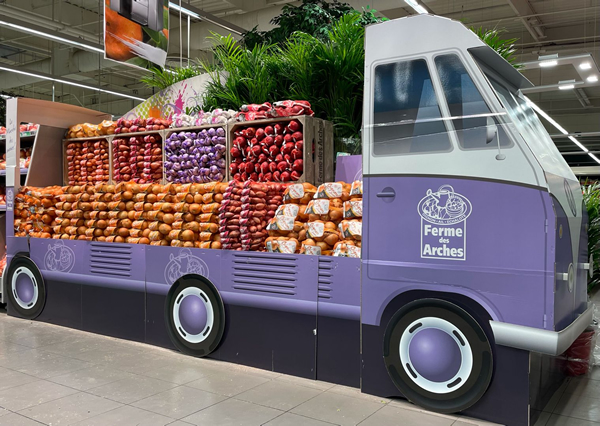 A beginning of campaign affected by the weather
After a dry and cold spring, the rainy-stormy weather between mid-May and the beginning of the summer led to the development of bacteriosis, and even fusariosis on the bulb onions planted in winter and spring. Nearly all production basins in Bourgogne-Beauce-Champagne-Ardennes have been affected, with just a few exceptions in the Champagne region.

Some questions regarding the preservation capacity of the first batches harvested
Initially, looking quite healthy at the time of the harvest, many early batches from early in the campaign have evolved in just a few days while in storage. Most of the operators of the French yellow and red onion sector have had to set aside between 30 and 60% of the product while sorting before packing, and some batches had to be destroyed. All together, about 30% of the first part of the harvest was set aside or destroyed. “There is some concern about preservation, but the situation is far from dramatic. We will have some heterogeneity in terms of quality, quantities and calibers depending on the regions, the farms and even the plots.”

Smaller calibers than in previous years
The sanitary context has since improved with the first varieties that were sown early which are now on the market. “The sanitary pressure is much lighter. This will allow us to work in better conditions. The quality of the batches harvested now is much better. However, the yields seem to be impacted by 10 to 15 tons per hectare, which represents a decrease of 12 to 18% of the harvest, and with smaller calibers (40 to 60mm).”

As part of the sales actions, the different operators of the market (suppliers, wholesalers, specialists, factories) will have to take these smaller calibers into account. “Most of the production still remains to be harvested, but we already know that this year’s market will be different than in previous years. It is important that the operators understand that and show some flexibility regarding the size of the onions. Unlike last year, there will not be a lot of large calibers. Additionally, the Spanish market will probably be buying a lot this year.”

The agroecological crops that were more impacted
After 3 years with production conditions that were rather dry and less favorable to the development of diseases, the difficult weather this year has increased the sanitary pressure, limited the intervention possibilities and their efficiency. “It should be noted that the onion varieties that are normally naturally resistant to mildew have also failed. Even if it is premature to draw conclusions, there are uncertainties about obtaining large calibers and regarding the long-term preservation of the onions. These observations are especially marked on the agroecological crops compared to the conventional ones. Some will see their harvest volumes reduced by 40 to 60%. A year like this really makes us aware of the fact that, despite our commitments, technology and know-how, Mother Nature still imposes her own rules.”

The first part of the season was marked with some difficulties, but the success of the campaign will be decided starting from now. The upcoming weeks will help us fine-tune this situation because most of the harvest is still to come. 75% of the yellow and red onion volumes are harvested between the end of August and early October. A report in a month’s time will bring a more pertinent assessment of the quantitative and qualitative aspects of the 2021/2022 marketing campaign.