The Australia-Peru Business Council was established

The APBC (Australian-Peru Business Council) will seek to promote the commercial ties that both nations already have: a Free Trade Agreement in force since 2020, they are part of the Comprehensive and Progressive Trans-Pacific Partnership (CPTPP), and are members of the Asia-Pacific Cooperation Forum(APEC). Peru is also a member of the Pacific Alliance and Australia is in negotiations to become an associate member. 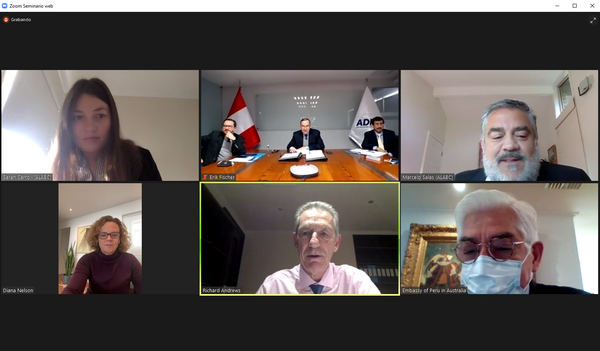 The MOU was signed by the president of the Board of Directors of ALABC, Richard Andrews, and the president of ADEX, Erik Fischer, in a ceremony that was attended by the Minister of Foreign Trade and Tourism, Roberto Sanchez, the Ambassador of Australia in Peru, Diana Nelson, the Ambassador of Peru in Australia, Miguel Palomino, the director of CIEN-ADEX, Edgar Vasquez, and high-level representatives of the industry, with businesses in both countries.

The president of ADEX, Erik Fischer, highlighted that the signing of the MOU was a very important step to strengthen and boost trade and investment between the two countries. He also said that this alliance would be a source of proposals for governments with the aim of strengthening the bilateral relationship.

Strengthening the countries' relationship
The head of Mincetur, Roberto Sanchez, said the memorandum of understanding will be very useful to strengthen and revitalize the bilateral relations with Australia and that it could be a key factor in the recovery of the national economy.

He also said that one year after the entry into force of the FTA between Peru and Australia, Peruvian exports had totaled around 115 million dollars, 35% of which were from the non-traditional sector. He also commented that they had identified 65 new exporting companies to that destination.

Finally, he said that Mincetur was coordinating with his Australian counterparts the implementation of the first NAFTA coordinating commission, to be held in October, where both governments will evaluate how this trade agreement is developing and establish a joint agenda.

The president of ALABC, Richard Andrews said the APBC is the fourth binational business group created by ALABC, after Chile, Central America, and Mexico.

ADEX said that in the first half of this year, non-traditional Peruvian exports to Australia -which decreased by 9.3% in 2020- had totaled 20,244,000 dollars, i.e. 44.1% more than in the same period of last year. The country exported mango, asparagus, and garlic, among other products.