As smoke clears after 6 days of mayhem, citrus association urges "seriousness" of the situation

As the smoke clears and the clean-up has started, KwaZulu-Natal residents have to get up long before sunrise to join the queues outside the few shops that are open. Fuel reserves in South Africa are reportedly stable, but there's countrywide fuel rationing to prevent hoarding.

The head of the army has called up all reservists to report for duty and government has started using words like 'insurrection' and 'orchestrated incitement' to sabotage water and fuel infrastructure. Residents of KwaZulu-Natal, patrolling their neighbourhoods by night while working by day, feel that the province has been sacrificed by the government.

Reports are coming in of vandalism to dozens of schools in the province.

AmaZulu king: "It's suicide"
Yesterday the amaZulu king addressed the nation, strongly condemning recent events: "Vital supply chains have been damaged and it is our very own families who will suffer the consequences. Knowing that all this is happening in a time of pandemic, and at the height of the most dangerous variant of the virus, leads to the only conclusion possible: my father’s people are committing suicide. One cannot see it as anything else." 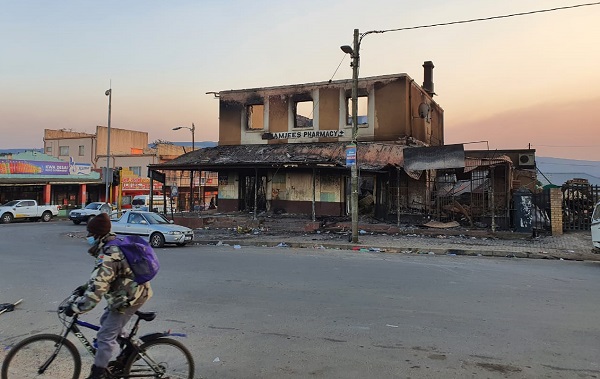 Hundred year-old corner shop, a pharmacy, in Richmond, KwaZulu-Natal, where all major grocery stores have been burned down

“No trucks will be permitted to enter or depart the Durban metro at this time. We are coordinating to ensure passage from reefer to Durban is manned and secured at hot spot areas,” Citrus Growers’ Association logistics manager, Mitchell Brooke, has said in a statement.

“All cold stores have closed and operations have ceased. All cold stores are fully intact and secure. CGA will be in discussion with applicable cold stores to increase security to ensure safety and security of cargo, staff and trucks that are transporting to and from facilities.”

Maersk: "We have not triggered any contingencies"
Shipping lines have been advising their clients that operations at Maydon Wharf and Durban Point Terminal in Durban harbour have been suspended until further notice due to labour shortages, while pier 1 and pier 2 container terminals are semi-operational with a small number of gangs active.

Maersk has released a statement to reassure clients: “We have not triggered any contingencies that would impact our vessel schedules in South Africa, as many of the services that call at Durban also call at other ports within South Africa so we have continued with operations at those ports."

The company says it's relieved to share that none of their facilities have incurred any structural damage. "We are already proactively working towards being able to assist customers as soon as it is safe to do so through road and rail. We have begun to see some operations resuming in the ports and in some facilities in Johannesburg. We continue to work with Transnet Port Authorities, Transnet Freight Rail and all our vendors to ensure we are able to offer solutions and available alternatives to all customers as the situation develops.“

Most of the world's cobalt used in electrical batteries, mined in the Democratic Republic of Congo, is shipped out from the port of Durban.

The Federation of East and Southern African Road Transport Association has released a statement highlighting the impact on the whole region: “What has happened in South Africa in this last week has also impacted hugely on other landlocked countries in the SADC [Southern African Development Community] region, who rely heavily on South Africa for imports of fuel, groceries, pharmaceuticals, mining equipment/spares, vehicle spares, tyres and much more. Those countries that have used South Africa as a transit route for exports through the Port of Durban will now turn to alternate routes for exports such as Walvis Bay [Namibia], Beira [Mozambique], and Dar es Salaam [Tanzania].”

Did hunger drive the protests?
Hunger has been a recurring and contested motif in the narrative; last night Police Chief Bheki Cele remarked, as he was shown recovered boxes of ammunition apparently stolen from a gun shop, that the claims that hunger drove the unrest, was ‘a smoke screen’. “We’re not saying there are no hungry people but if you’re hungry, a thousand rounds of ammunition is not what you steal. Some people were preparing for a war.”

However, hunger and food insecurity is now a very present concern in KwaZulu-Natal. Bread production has stopped at bakeries across KwaZulu-Natal and a bread shortage is predicted. The fresh produce market in Durban is still closed, but might be opened tomorrow but stock will be limited.

Informal traders are saying their stock of fresh produce is getting old, with some selling from their homes rather than at their usual spots in the city centre. 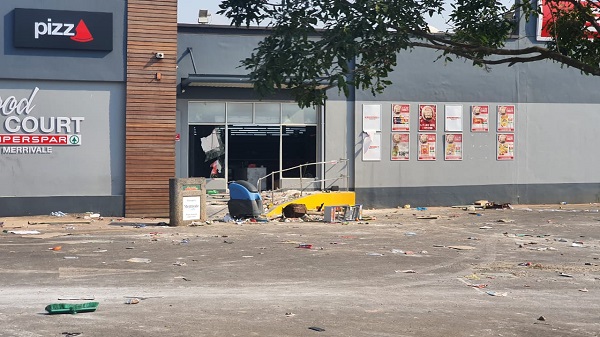 Entrance to a grocery store in Merrivale, 150km from Durban

At the shops that have today re-opened customers get sixty seconds to grab ten to twenty items – the only meat in the shop is pork, a customer notes. Milk and bread are in short supply, there seems not to be particular shortages in fresh produce.

“Many people yesterday tried to go to the shops that were open, but I know of people who waited in queues for up to five hours and eventually had to turn away without even getting inside the shop,” recounts a Moseley resident.

Value of local production
A retail fresh produce manager on holiday in KwaZulu-Natal was stuck with too little fuel to leave Hilton, 12km outside Pietermaritzburg and looking down on the city and the black smoke rising from burning shopping centres.

He has described the community reaction, first to keep looters out and secondly to organise food, as “amazing”. 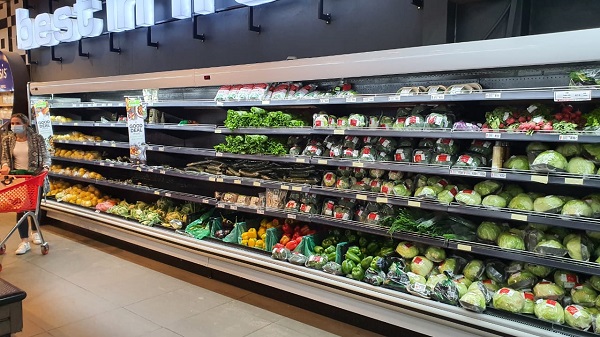 Fresh produce in the well-heeled village of Hilton this morning after several days of closure; the community protected local stores which have been buying produce directly from the area's farmers

He notes that this has shown up the value of local agricultural production; there is significant dairy and vegetable production in the KwaZulu-Natal Midlands. In fact, the dumping of thousands of litres of milk in Kamberg yesterday (after much of it had been given way and storage ran out) has caused outrage but has also sparked a determination among communities to prevent further such food waste in a time of shortage.

Emseni Farming at KwaSizabantu Mission has reportedly been donating fresh produce to the Ballito area where shops have been closed for two days.

The Richmond Fire Protection Association realized food is going to become a problem, says Robbie Gemmel, chairperson of the Richmond branch. At an avocado packhouse in Richmond they have set up an emergency food distribution centre in case of need. “We’ve managed to get mealie meal [cornmeal], eggs and cabbages and milk. It’s for sale and we have a responsibility to labour on the farms who are running out of food, so they’ll be able to come and draw.”

He adds: “It’s completely non-racial. Whoever arrives looking for whatever we’ve got, can get it. It’s not like a white-black thing.”