Start of the open field harvest in the Lower Rhine region

"Despite the cold, we expect normal vegetable and lettuce yields"

This year's vegetable harvest is now getting started in the vegetable fields of the Lower Rhine region. "Tomorrow, Saturday, we will cut the first lettuce of this year's season," says Heinz Stoffers, vegetable producer and owner of the Krefeld-based vegetable farm of the same name. Despite the weather-related delay, he expects good volumes, of good quality.

Traditionally, the open field harvest starts with the lettuce, followed approximately ten days later by the first iceberg lettuce. "For both crops, we start the season one week later than usual," says Stoffers. The situation is similar for kohlrabi and flat cabbage: "With the latter crop, we probably won't start until June 10, whereas in other years we've been able to get going at the end of May."

Heinz Stoffers (r) runs the vegetable farm together with his son Matthias. Father and son market their vegetables mainly to German food retailers through Landgard eG.

Current pricing
Due to double protective covering with nets and fleece, the recent cold snap had only a minor impact on the crops, he said. "The vegetables have grown up nicely and we expect good qualities and reasonable yields despite the cold snap," the grower predicts. It is difficult to estimate how vegetable prices will develop at the beginning of the season, he adds. "Lettuce has been relatively expensive in recent weeks, with unit prices around €0.50." 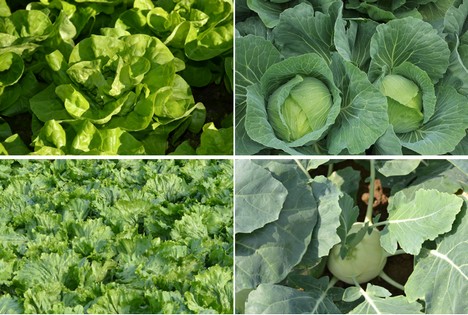 The four main crops of the vegetable farm. from left to right: lettuce, flat cabbage, kohlrabi and iceberg lettuce. According to plan, the company will start up a 3000 m2 processing hall for vegetables in the summer.

Marketing in times of Corona
In addition to the weather, the ongoing Corona crisis continues to make itself felt, Stoffers confirms. "Last year, from my point of view, demand was 10-15 percent higher than usual with slightly higher and stable prices." On the other hand, the pandemic also has a downside for the vegetable producer. "We are facing higher labor and production costs," he concludes.