Could larger onions be funnelled to food box program?

Onions are seeing mixed supplies currently with pricing on the lower end.

Michael Davis of Tex-Mex Sales LLC in Weslaco, TX notes that in the northwest, supplies are strong on larger sizes of onions—jumbos and colossals. “A lot of the onions in the northwest are grown for size and yield,” says Davis. “I don’t see a lot of supply on the small size in the northwest. There are those onions but they’re probably committed with retail and now that the USDA Farmers to Families Food Box program has come around again for another round, I think most of those onions will probably be committed.”

Given retailers prefer medium-sized onions, Davis notes that ideally the food box program allow jumbos to go into the food box. “I think it’s going to be very difficult to get medium supplies out of the northwest here in the next couple of months.”

More limited on whites
He notes that on white onions particularly, supplies are short. “They have enough for the next couple of months but there’s no oversupply. I don’t see whites in the northwest coming down,” he says. 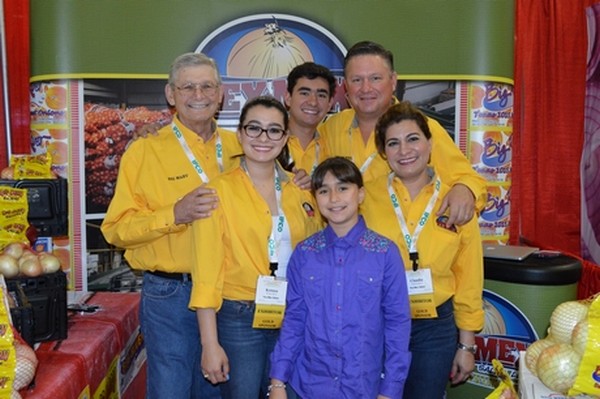 The Davis Family at a past Viva Fresh Expo in San Antonio, TX.

As for demand, Davis notes it’s on par. “Normally at the end of January, it’s horrible,” he says, noting post-holiday buying means demand is generally slow at the end of January and that retail last week was slower. “Mexico usually comes in in February, so buyers bring their inventories down quite a bit to ensure that they’re not holding high dollar inventory if the market is going to come off. It happens every year.”

Waiting on foodservice
Other factors continue to hang over the onion industry in the near future, especially the reopening of restaurants. “Restaurant business is still very slow—until COVID-19 goes away, I don’t know what will happen with restaurants,” says Davis. He also notes that there are concerns over the potential raising of minimum wage which could happen with a new administration in the White House. “Anyone in the produce industry that uses minimum wage on the farm or packing shed, it’s automation time,” he says.

Meanwhile pricing on onions is very low, says Davis. “The northwest has onions priced very low because there are too many jumbos and they can’t move them through,” he says.

Looking ahead, he notes that by the middle of February, the industry will have a better idea as to where things will go. “That includes whether the northwest can raise their pricing,” he says. “If they can pack jumbos in the food box program, then they might be able to move some more of the product they need to move. If not, it’s going to be difficult.”