Although New Zealand obtained a record kiwifruit harvest last year, the producing regions in the northern hemisphere are facing a decline in their volumes due to the weather conditions, among other factors. Spain and Italy report drops of close to 8%. Since there are fewer kiwis on the market, but a reasonable demand, prices this year are slightly higher. Besides the yellow and green kiwis, red kiwis are also gaining popularity as a niche product. Prices for this fruit are increasing, especially in China. 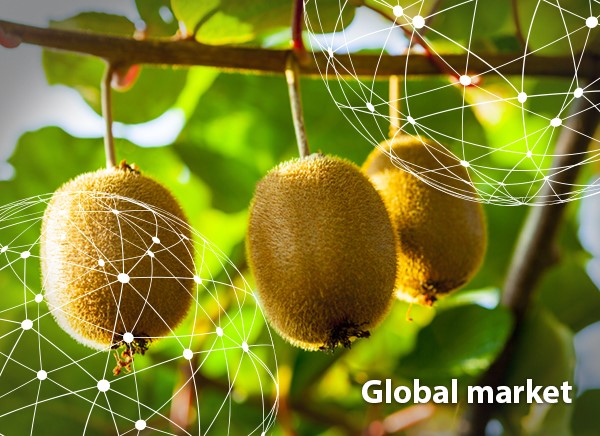 New Zealand: Record harvest for New Zealand kiwis
In November, Zespri sent the last shipments of this season's New Zealand kiwis, which arrived in December. In the 2020 season, the company reports to have used 49 chartered refrigerated ships and 17,829 refrigerated containers to ship approximately 157 million Class 1 boxes (600,000 tons of Zespri SunGold, Green and Zespri Red kiwis) to consumers in more than 50 countries around the world. In total, more than 87 million boxes of Zespri SunGold kiwifruit and 70 million boxes of Green kiwifruit have been delivered.

The company says that despite the coronavirus pandemic, it has had another strong season. “We have been fortunate that with the support of the government and our communities, we have been able to continue to operate and deliver this season's production to consumers around the world,” said one manager. “The entire supply chain, including the staff at the port of Tauranga, has worked incredibly hard to ship this season's record-breaking harvest. New Zealand has once again delivered more Zespri SunGold kiwis than Green ones this season, after obtaining the largest harvest to date."

Germany: South German kiwifruit market on the rise
The demand for many types of fruit is lower due to the low temperatures. That of kiwis, meanwhile, is on the rise, especially in Southern Germany. The European season is still in full swing, with production from France, Greece and Italy. France is on top in terms of prices, with an average of 3.24 Euro per kilo for the larger sizes. Meanwhile, the Greek costs just around 1.59 Euro / kg.

After years of growth, kiwifruit imports seem to be stagnating slightly in Germany. In the first quarter of 2020, approximately 27,000 tons were imported, which is approximately 5,000 tonnes (15%) less than in the first quarter of 2019. Throughout the year, 108,000 tons of kiwis were imported in 2019. On average, Germans consume about 1.3 kg of kiwis per person per year. This is an increase of approximately 15% compared to 2018. Italy is still the main supplier, supplying just under 60% of the total volume. New Zealand and Greece follow at a considerable distance.

France: Small volumes on the market
The production in France is negligible this year, if we look at the volumes. This makes pricing important for the French production and a good quality with a high Brix helps in that sense.

Spain: Higher import costs offer opportunities to domestic production
The production of Spanish kiwis has been reduced by 6 to 8% this season compared to the previous one. The sale of kiwifruit from Galicia and Asturias, the main growing areas in Spain, started in December with an abundance of large sizes. Small sizes have become more expensive and are sold for similar prices to those of the medium-sized kiwis.

According to a Spanish trader, kiwifruit sales are lively and prices are good. “There is not much second-class or undersized fruit this season. We also notice less competition from Italian and Greek kiwis, of which the harvest also appears to have been reduced. Imports are more expensive this year, which gives more room to Spanish kiwis,” he says. The Spanish kiwifruit season will finish earlier due to the slight drop in the production and the good sales achieved between late March and mid-April.

Kiwifruit sales in Spain are increasing by an average of 8% per year. It is an important product for consumers. Spain has one of the highest per capita consumption rates (3 kilos per year, per inhabitant).

Italy: Green kiwifruit exports will start to increase in February
Kiwifruit has remained one of the most popular fruits on the European market during the pandemic. The sale of green kiwis is going reasonably well in terms of both quality and price, despite the Greek competition. In Europe, the demand, and therefore market prices, is expected to start increasing from mid-February, especially ahead of Easter, in the spring. It is also worth noting that organic green kiwifruit is doing well, with the demand and prices increasing worldwide, especially in North America.

Besides green kiwis, yellow kiwis are also grown in Italy. The country's production was quite low in 2020, although there are differences between growing areas. The production is steadily increasing, but not enough to meet all the market demand. After all, the yellow kiwifruit is gaining popularity compared to the green kiwi. Red kiwifruit remains a niche product, with limited batches available on the market. Still, prices are higher than expected.

Greece: Prices slightly higher than last year
Greece has great volumes this season. The quality looks good, but the sizes are a bit smaller than last year. The demand is pretty good. The coronavirus has led several countries to introduce more measures, but this is not expected to take a toll on the Greek kiwifruit season, given that Greek exporters are following the guidelines and protecting their workers. Prices are slightly higher than last season.

Turkey: Relatively new export market
When it comes to fruit exports, kiwifruit is a relatively new product for Turkey. Various companies are making their first large-scale kiwifruit shipments this year. Their target markets are the Middle East, Italy and Spain. Russia is also a potential market, as are German supermarkets. The Turks face competition from Greece and Italy, but they feel that they are certainly able to compete in terms of both quality and prices.

South Africa: Lower demand due to lack of tourism
The production of the local Hayward kiwis won't start until March, which means that the kiwis available in the South African market are now being imported from Italy and Spain. Much of the demand for kiwis normally comes from the tourist industry, which has been hit hard by the coronavirus. A market agent says that there are kiwis available all year round. After the Italian season, the country immediately switches to New Zealand's supply. The domestic production fills the gaps. More yellow kiwis are being planted for the export market, for the period when New Zealand is not yet in season.

United States: Good supply and strong prices
Last season, the harvest in California was slightly smaller in terms of volume, but with an abundance of large sizes. Currently, the State still has around 60% of its kiwis in stock and things are running on schedule. The demand is good and prices are fairly stable, and due to the smaller harvest they are also higher than last year.

Canada: There may be a market gap this year
The kiwis currently available in Canada come from Europe, especially from Greece and Italy, with some Spanish production also here and there. However, the volumes are lower than in the previous season. In the meantime, the demand is rising, which is normal after Christmas, according to an importer in Ontario. The coronavirus pandemic has also given a boost to the demand for kiwis, resulting in higher sales growth for his company. Market prices are also higher than last season because of the coronavirus and are expected to rise even further in February.

The strong demand could lead to an early end of the European stocks and thus possibly to shortages. This could create a small market gap. After all, the prospect is that Chile will start a week later and there is no definitive harvest estimate for the upcoming season in New Zealand. According to the importer, the question is whether European kiwis will remain available for export or whether Italy and Greece will keep more batches in their own markets.

China: Lower export figures, only red kiwifruit did well this year
This year, the total export of Chinese kiwis is lower than in previous ones. The prices of green and yellow kiwis in particular have fallen and sales have been poor. However, red kiwis have done well in the market, with a price that has more than doubled.

The price at origin of the red kiwis is lower this season than in previous years. The quality of the fruit and the shelf life are good; later, the market price has almost doubled the harvest price. Social media in China has played a big role in giving this market a boost. A large number of fruits were sold via live broadcast in a short period of time, resulting in reduced stocks and a rapid price increase.

In terms of exports, the red kiwi is a high-end product in the overseas market. The price is much higher than that of the green and yellow kiwifruits. Southeast Asia is currently the main destination for this variety, which is being severely affected by the coronavirus in the overseas market. This has resulted in lower exports compared to previous years. The market conditions for imported kiwis were also not good this year. The yellow kiwifruit Dori and the green kiwifruit Hayward from Italy recorded poor sales in China. One of the reasons is that the drop in the production led to a higher price. Moreover, the transport costs are very high at the moment. To avoid risks, many Italian companies have reduced their exports to China.