The second day of the International Banana Convention was jam-packed with educational sessions. The last session of the day was led by Clinton Machado, Global Head of Bananas and Pineapples at Maersk. Machado discussed the changing perspectives of logistics post-covid-19. 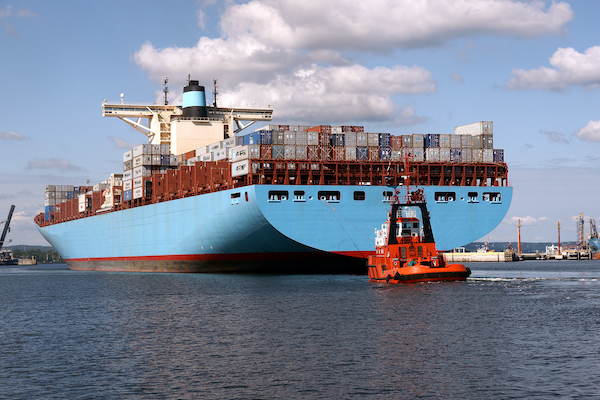 Market update: Banana exports reach record numbers in 2019
To begin the session, Machado provided an update on the global banana market through 2019 and 2020. “In 2019, the global seaborne exports of bananas, excluding plantains, were estimated to reach a record level of 20 million tons, which was up by 5% from 2018. The two main producers for exported bananas in the world continue to be the Philippines and Ecuador,” says Machado.

In the Philippines, the exports are mostly destined for Asian and Middle Eastern markets. “Markets like China and Japan are very important for the Philippine banana exports,” says Machado. “In 2019, the Chinese demand for Philippine bananas showed a slight dip due to new trading lanes with Cambodia. According to the Cambodian Ministry of Agriculture, they exported approximately 121,000 tons of yellow bananas to China during the first five months of 2020, and they are planning on doubling these numbers in 2021. In addition to the Asian markets, the Middle East is also an important destination for the Philippines. In both China and the Middle East, as their economies grow and a change in their perspective of health and nutrition is expected in the coming years, the demand of organic bananas is projected to grow,” he adds.

India is a large banana grower, volume-wise, but most of their bananas are destined for the domestic market. Thanks to government investments into the markets, Indian growers have increasingly begun exporting their bananas, according to Machado. “If these efforts are successful, they could penetrate the Middle Eastern and Mediterranean regions,” Machado says. 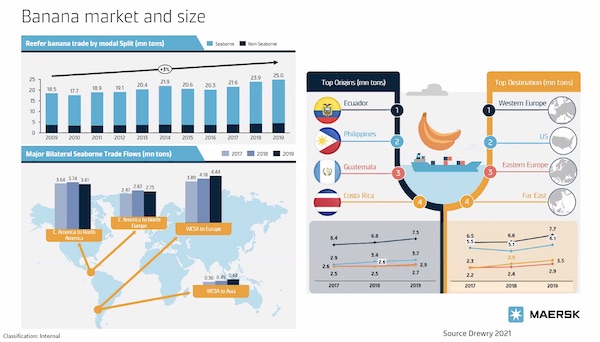 Europe and the US remain the largest consumers of bananas
For the Latin American growers, their biggest export destinations are located in the United States and in Europe. These two regions also combine to form the two biggest banana consumers in the world, according to Machado. “Latin America continues to be a global leader of seaborne banana exports, comprising 73% of the overall volumes,” says Machado. “In 2019, due to adverse weather conditions, production in Costa Rica, the Dominican Republic and Colombia was affected, which also resulted in a decrease in imports from the United States – which was down 3% from 2018. Production in these regions has now improved and is expected to continue to improve through 2021.”

While the US and Europe are currently the largest consumers of bananas in the world, there is a lot of potential for growth in other markets. “Russia currently has the 4th largest per capita consumptions of bananas in the world and this is expected to rise, backed by a positive economic outlook for the country. It is projected Russia’s consumption will be up to 28 million tons by 2029. The entire global production of bananas, according to the Food and Agriculture Organization by the United Nations, is projected to increase to 126 million tons by 2029. This overall rise in demand will be driven by population growth,” Machado explains.

Maersk: Logistical integration
Throughout the pandemic there have been many challenges for all industries across the world. For the banana industry, as with many other produce products, logistical challenges were an important part of the struggle. “Delays were quite prominent early on in the pandemic, but our team worked around the clock to make sure no fruit was left behind,” says Machado. 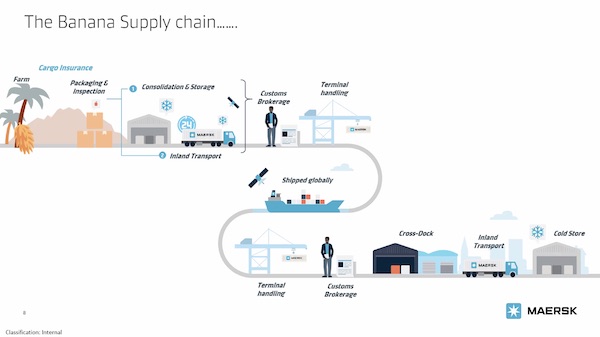 In the months of the pandemic, Maersk has put a lot of effort into finding the best path to supporting their customers.  “We have taken many incremental steps along the way of these past months in the pandemic to become a true integrator of global logistics who simplifies the customer supply chain solutions and adds value to their business. Starting October 1st, 2020, Maersk has optimized its commercial alignment between its branches by creating one integrated simplified ocean product organization to manage the customer’s ocean business across Hamburg Süd and Maersk. To create more value for our customers across the supply chain we have infused the passion of Safmarine and the strengths of Damco and LCL into Maersk, thus creating good potential for the company to become a logistical integrator from end to end. Our main focus is to create value and share that value with the customers and deliver the most efficient supply chain solutions,” Machado concludes.

The International Banana Convention will run through Thursday, October 8th. To register to attend the event, click here. To see a schedule of the educational sessions, click here.