In week 40, the export of Peruvian avocados is falling and the end of the season is also in sight for countries such as South Africa, Kenya and the US (California). The market is now shifting to other producing countries, such as Colombia, Spain, Italy and the undisputed powerhouse in avocado production: Mexico. The European market is currently tight, so the price has risen. This is especially true for the small and medium sizes. However, prices are still below those of 2019. 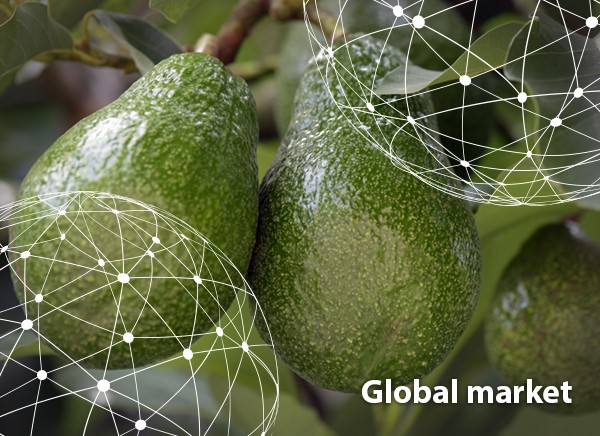 Mexico: Dominant player in the market
The Mexican export season to Europe, Japan, Hong Kong and Canada was pushed back by about two months this year due to market oversaturation, which was caused by a decline in the demand due to the pandemic. Jalisco growers started shipping in July instead of May, but things have now gone mostly back to normal. Most of the countries competing with Mexico have now finished their campaigns and the market has stabilized with a good balance between supply and demand. Jalisco growers are now switching from their Mendez crop (a Hass variety) to their Hass crop and expect higher volumes in the coming weeks.

Peru: False start due to pandemic
Peruvian avocados have had a good season this year, recovering later in the campaign from the low demand recorded at the start of the pandemic. Given its high supply this season, Peru has been working to expand its presence in the US market and will continue to do so. Currently, about 60% of their harvest is intended for Europe, 30% for the US and the other 10% for other destinations. The campaign has already ended and will start again in the spring of 2021.

Colombia: A future big player?
Colombia is working hard to become one of the major players in the avocado industry and has the potential to grow the fruit all year round, although they are not there yet. The main markets for Colombian avocados are currently in Europe, but their sights have been set on markets around the world. Colombian avocados were in their low season from May to the summer, and the volumes are now starting to increase again.

Dominican Republic: Greenskin becomes tropical avocado
The most common avocados in the Dominican Republic are the green-skinned, which are currently marketed by the country as tropical avocados in hopes of expanding its presence in the US market. September was marked by the start of the harvest of the Semil-34 variety, which is the most popular one due to its long shelf life. Tropical avocado marketers are currently taking a big step to increase their presence in the US market, particularly in Texas and the West Coast, as their current major markets are those along the East Coast.

Netherlands: Limited supply and good prices for avocados
Due to a limited supply, the prices of avocados on the European market continue to rise. For example, the supply from Peru is declining, and that from South Africa and Kenya is coming to an end. The volumes from Chile are still limited, as is the supply from Mexico. However, due to the difficult situation in the North American market, more volumes could be shipped to Europe. The supply of the small and medium sizes is particularly limited, as is that of the greenskins. Israel is delivering some not very large volumes of Ettinger.

Germany: Difficult situation with air freight
The supply of avocados in the German wholesale market seems to be stabilizing at the moment. During the summer months, there were some oversupply and low prices, partly due to the lack of demand from the catering industry due to the coronavirus. The demand and prices have now stabilized somewhat again, although there are also fears in Germany for a second wave of the coronavirus and consequently stricter measures. This could also have consequences for air freight, and it should be noted that avocados imported by air are a major product on the German wholesale markets.

From week 38, the supply of Peruvian Hass avocados increased again, while South Africa played a more prominent role in the summer months. A rise in the demand for exotics is also expected in the coming weeks in both the retail and wholesale markets.

France: Fluctuating market
This year, the avocado market has been subject to huge fluctuations. After a bad summer period with low prices and a big supply, the market has improved again in September. The supply and demand are at a high level. The supply from Peru is declining and the market is switching to Chilean avocados.

United Kingdom: Switch to Colombia and Mexico
Large volumes from Peru were expected on the British market, and European customers tried to keep prices down, but given the market fluctuations, this is not always easy; certainly not in weeks when certain sizes are sometimes hardly available. What remained consistent, according to British traders, was the quality. Now that Peru is shipping its last avocados, the UK is switching to Mexican and Colombian products.

Spain: Start of the Bacon avocado season
Due to the high temperatures recorded in southern Spain, the harvest of the first Bacon avocados is starting earlier this year. It usually starts around mid-October, but next week it will already be possible to pick avocados in some orchards. The fat levels show that the avocados are almost ready to be harvested in some early areas.

According to a grower, the high demand is making them want to start the season as soon as possible, as customers are eager to buy Spanish Bacon avocados. High prices are currently being recorded and everything points to this becoming a good season. After the Bacon and Fuerte, it will be time for the Hass variety, which is the most common avocado in Spain.

Italy: Start of harvest in Sicily
Avocados, especially those of the Hass variety, are becoming increasingly popular and loved by consumers in Italy. Recent data from Nielsen confirms that this fruit has reached a market share of 46% in the exotic fruit and vegetable category.

In Sicily, the avocado harvest will start in a few weeks, with the Bacon, Fuerte and organic Hass being some of the varieties grown here. Sales are mainly carried out through retail platforms and e-commerce, and to foreign wholesalers. In the wholesale markets in Northern Italy there are Israeli Hass avocados and Peruvian Hass avocados, with prices ranging from 3.80 to 4.25 € / 4 kg.

South Africa: Export forecast adjusted downwards
South Africa's export season is already at 95% completion, and it has been a difficult year due to the lockdown. The sales of the early greenskin avocados in particular were hit hard by the loss of the food service channel.

When Peru entered the market after some struggles, the volumes were 30% higher than expected. The result was an oversupply of avocados and a negative impact on prices. It took a few weeks to get rid of those volumes.

The previous export forecast was revised due to the lower packouts, smaller sizes and also damage to the orchards here and there due to the cold weather. This season, the total therefore reached 15.5 million boxes (4 kg). The first fruits for the next season are already hanging on the trees, but now it's still too early to make any forecast about that. The risk assessment of South African avocados has started in China. This is a first step to be able to reach this market as well, but the process is expected to take years.

United States: Sufficient stock for the next six months
The US market is currently well supplied of avocados thanks to the volumes coming from Mexico. Traders will have nothing to worry about in this regard for the next 6 months. The "Flora Loca" marks the kick-off of the new Mexican fall avocado season, and that's just what's going on in Michoacán state. The fruit being picked now could have actually been harvested 8-10 weeks earlier, and because of that extra time the avocados have been on the tree, the fruits have grown larger.

In the US itself, this year's harvest in California is about 95% complete. The total volume was estimated at 167,000 tons. Peru is also almost finished and has sold 78,000 tons of avocados on the US market this season. “Last week, 4 more reefers arrived, and then you know that the end is in sight,” says an importer. This will leave Mexico alone in the US avocado market for now, with some small volumes from Chile, which accounts for less than 5% of the total. The price in the US market will mostly determine how much the country will eventually ship. With high prices, it becomes more interesting to export, but at the moment, the prices on the market are below last year's level, and given the Mexican volumes, this is not expected to change anytime soon. The price may rise towards the end of the season, but there will likely not be a repeat of last year's sky-high prices.

The market demand is currently stable at 22,000 tons per week, with 15% going to the food service. Normally, this channel takes 30%, but those volumes have been absorbed by the retail. Avocados will soon have to compete on the supermarket shelves with the seasonal autumn products.

China: Further growth in consumption
Colombia, the Dominican Republic, the Philippines and the US have recently been authorized to export to the Chinese market. There is a growing supply in this country, with more varieties and origins, and the demand is also rising year after year. The number of ripening facilities in China is still limited, but also increasing, and there's even local cultivation in the South Chinese province of Yunnan.

Australia: First trial shipment arrived from Chile
It is now spring in Australia and the country expects the supply of fresh avocados to be resumed in the summer of the Southern Hemisphere. As expected at this time of the year, most of the domestic production on September 19-25 will come from Western Australia (about 30%) and Central New South Wales (about 20%). Fruit from New Zealand has also already entered the Australian market for the 2020/21 summer season.

In September, a small trial shipment of Chilean avocados arrived in Australia by air; the first since the Australian government set phytosanitary import conditions. Two sea freight containers of Chilean avocados are reported to have arrived in Sydney at the end of September. Avocados Australia says that both Chile and New Zealand have unexpected opportunities in the 2020/21 season, given the cold conditions during the flowering and fruit setting in Western Australia last year and the storms in 2020, which have caused a decline in the domestic supply.

However, according to the trade association, this window for imported fruit is closing quickly. The growing areas of Southwest, Western Australia and South Australia, which supply fresh avocados in the spring and summer period, have been considerably expanded. Over time, the need for imports to guarantee a year-round supply in the Australian market will certainly be reduced. Australia expects to produce around 115,000 tons per year by 2025.

As for the pandemic, the Hort Innovation Category and Consumer Impact Monitoring project report that concerns about the coronavirus are beginning to subside in all states and territories except Victoria and New South Wales. For fresh produce, including avocados, this has translated into a decrease in the purchase of canned and frozen fruits and vegetables, and an increase in the importance of health benefits for those who spend more time at home preparing healthy and nutritious meals.