The supply of local cherries is now slowly running out. The last shipments from German and Dutch cultivation are already in circulation. Now we are looking at the imported goods: "On Tuesday the first arrivals of Canadian cherries arrived at our premises," says the management of Hartmann's Frucht based at the Dortmund wholesale market.

The season for Canadian batches traditionally starts off rather high-priced, they confirm: "The price per kilo for imported goods fluctuates around 15 euros, while the last batches from the Netherlands and Germany are sold at an average of 9-10 euros". All in all, the wholesale company has a positive seasonal balance. "The domestic cherries have consistently been well received by our customers. Every day we have been able to sell between 500-700 kg." 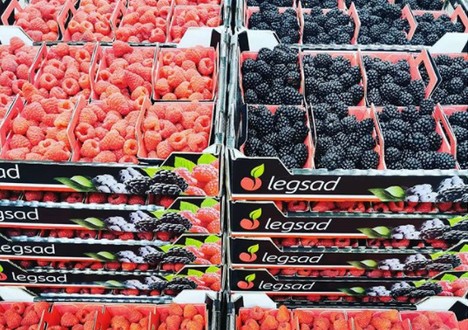 Parallel to the last shipments from domestic cultivation, berries from Poland are entering the market.

Blueberries are also being phased out
It is not just cherries that are in the final stretch, but local blueberries as well. "I estimate that this year's blueberry campaign will finally be over in 10 to 15 days. After that we will offer Dutch batches for a short time, so we are able to extend the season a little bit. However, the Dutch blueberries and raspberries are quite expensive at the end of the season," the management of the Dortmund company explains.

Chanterelles: season ends in two weeks
In the vegetable sector, chanterelles still dominate the scene. But even the popular wild mushrooms will only remain available for a short time, they report: "We currently receive shipments from various countries, namely Poland, Hungary, Romania and last but not least the Russian region of Kaluga, which are traded at different prices. Polish unwashed goods are currently at €6.50-7.00 per kg, while Kaluga goods are sold at €9.00-10.00 per kg due to their high quality. We expect the season to end in about two weeks".

Chanterelles from Eastern Europe and Canadian cherries: Two seasonal highlights in the assortment of the Dortmund wholesale trade.

Strong flows at weekly markets, gastronomy returning to normal
Despite the eventful months in the wake of the Corona pandemic, the management of Hartmann's Frucht can look back on a successful summer season for the time being. "Sales in the restaurant trade appear to be gradually returning to normal. In addition, we continue to see a strong flow of goods at the weekly markets."