“Potatoes and onions on reefer ships to West Africa; the container shipping companies were none the wiser at first”

Reefer containers are gradually replacing refrigerated vessels in maritime transportation. It seems almost to be law; something everyone just knows. Yet, there’s an exception to the rule. Twenty years ago, Joris Bakker started a charter service. In the years to come, it quietly stole away a considerable amount of the large shipping companies’ market share. This is in the route to West Africa. In doing so, Joris managed to make this phenomenon do an about-turn. 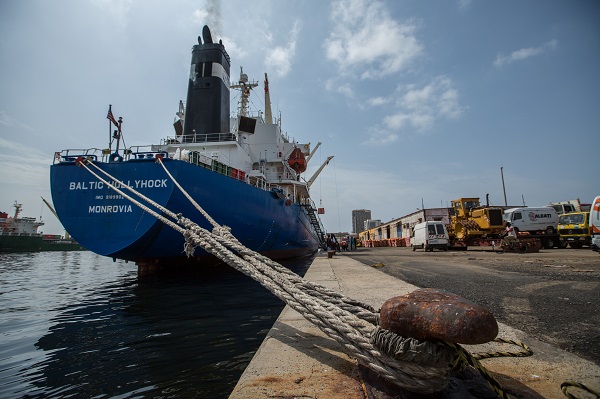 The company in question? Breadbox Chartering, based in the Netherlands. No, it has nothing to do with his surname, laughs Joris Bakker, when asked. “It’s slang for a ‘gut feeling’. That’s become a bit of a philosophy for our company. We relied a lot on our gut feeling when we founded the business,” he explains.

In 2000, Joris ran into an onion trader who was complaining about the sky-high prices he had to pay to book a reefer container to West Africa. ‘There must be another way,’ thought Joris, who was then working at a shipping company with quite a few refrigerated vessels in its fleet. Because if he mentally calculated it, he could offer a reefer ship for 30% cheaper.

Return cargo
“Many reefer ships were and still are used to transport fruit and vegetables from the Southern Hemisphere to the Northern one,” says Joris. “Think of the scheduled citrus service from South Africa to Antwerp, Rotterdam, and St Petersburg. These ships then usually return, empty, to South Africa or South America to collect a new load of fruit. ‘There’s a gap in the market there’, I thought. I then decided to charter these vessels. I could offer the space to potato and onions exporters who traded in West Africa. These ships would then no longer sail back empty.”

Dakar
The first chartered ships sailed from Vlissingen in the Netherlands to Banjul, Gambia. Later, the ports of Nouakchott in Mauritania, Dakar in Senegal, and Abidjan, on the Ivory Coast, were added. The number of crossings also increased to a weekly sailing. The ship couldn’t dock in Guinee’s Conakry harbor, but it could in Dakar. The scheduled service to this Senegalese port has proved a great success for Breadbox. So much so that, last year, the company decided to buy a 30,000 m2 piece of land there.

They want to build a storage and transshipment facility for Dutch onions and potatoes. “Senegal is the most important destination for Dutch onions,” says Joris. “We ship about 100,000 tons annually to that harbor. In our 20 years of existence, we’ve never skipped a season. At the Port of Dakar, the onions are simply placed on the quay among the other goods. It’s often chaotic. That’s why we're going to employ a shuttle service. We’ll bring the onions directly from the quay to our storage and transshipment facility."

"Importers can then collect their goods from there. For the coming season, this will still be a 2.500 m2 tent on a walled-in site. Next year, we hope to build a 6,000 m2 awning. And later, in phase 3 of the build, we might add cooling facilities for, for example, potatoes that need to refrigerated in Africa. But it’s not the intention to create a cold store. The building’s primary function will be to handle the large quantities of palletized onions.” 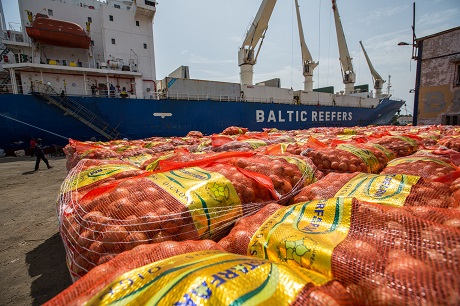 A lot of cargo in a short time
But only having cheaper, occasionally empty ships sailing to the Southern Hemisphere doesn’t cut it in the potato and onions export business. “We think we can offer exporters more benefits,” says Joris. “Firstly, there’s the fast transit times. Simply stated, the onions and potatoes are loaded on a chartered ship in Vlissingen."

"These arrive at the Port of Dakar within five to six days. There, they're offloaded directly onto the quay and left there. Traders can, in principle, collect their goods as soon as they’ve been dealt with by our agent, who’s a Breadbox partner. Therefore, there are no issues with the stopovers container ships have, or handling or time wastage at the container terminal. Handling at this West African container terminal is hectic too."

"Secondly, the cargo volumes we can transport in this short amount of time also plays a role,” Joris continues. “The African market seasons in which they’re allowed to export onions start later and end sooner each year. So, the window's getting smaller. We have a solution for this. We can line up a good number of ships in a short time. We can, therefore, transport a reasonable number of loads in this ever-shrinking season.”

Competition from… road transport
In recent years, however, exports to West Africa - where Senegal still imports the most Dutch onions - has proved not to be a given. In dry summers like that of 2018, there's little stock. Dutch onions then become too expensive for that West African country. They then switch to alternatives such as Moroccan onions. For Joris, that also spells competition. “Moroccan companies prefer to transport onions to Senegal by road. This way of logistics is becoming more common and is a formidable competitor on the market”.

Joris currently has fewer problems due to the coronavirus pandemic. “We do have to work between the office and home. But that’s working out well for us. The Reefer season only starts in August. But, our Multipurpose routes cost price has fallen. That’s thanks to the petrol price that tanked. Shipping prices are also slightly down. The advantage we gained is that we already closed long-tern shipment contracts,” Joris concludes.