Spring indicates the stone fruit season in Turkey, the world’s largest producer as well as one of the top exporters. The Turkish cherry harvest is expected to commence in late May, while peaches and nectarines will begin picking in June. Turkey’s stone fruits have had success with harvests in the past few years and despite minor logistical hiccups from the coronavirus, Turkey is expected to continue the positive streak.

Favorable climate boosts production
Turkey produces both sweet and sour cherries, with the majority being sweet cherries. Production for Turkish cherries has steadily increased for the past decade, allowing the country to become the largest supplier with 353K MT of cherries produced in 2018.

The weather has been optimal for stone fruit production in the past few seasons, and 824K tons of cherries were produced in 2018/2019, up by 24.5K tons from the previous season. Forecasts for the MY 2019/2020 season were even higher, at 865K tons of cherries. Peach and nectarine production forecasts for the MY 2019/2020 season increased as well, at 830K MT, up from 790K MT during the previous marketing year. 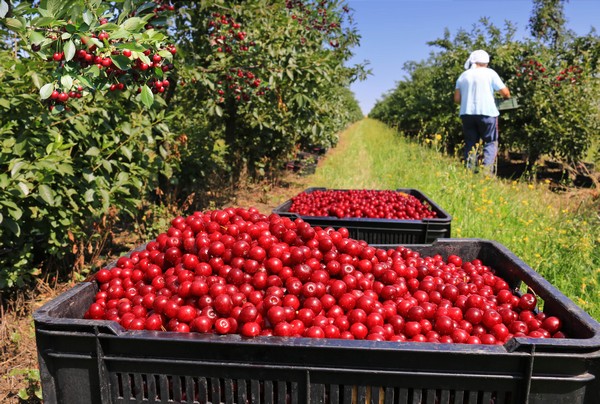 Turkey’s exports aided by the government
According to Tridge’s Export Data, Turkey has been upping its exports for peaches and nectarines significantly, where figures have stayed relatively stable until 2017 when export values increased by 171.5% compared to 2016, from USD 25.7 million to USD 69.78 million. The growth has been largely attributed to strong government backing, providing funding for farmers who want to establish new orchards, as well as money for fuel and fertilizers. Several grants exist in cooperation with the EU which provides investments for fruit processing facilities in Turkey.

Spike in growth connected to high export market demand
Strategically, Turkey has leaned towards satisfying the demands of the export market. Cherry farmers have been selective in planting high-yield trees, as well as planting sweet cherries over sour ones which are higher in-demand. Between 2005 to 2016 alone, the number of sweet cherries produced in the country increased from 6 million to 21.5 million. The Ziraat 900, or the Turkish Napoleon, remains as the most cultivated variety, as well as the most popular in its export market. The Ziraat 900 plays a huge role in Turkey’s presence within the European cherry market, as it runs a longer season than other varieties, facing low competition after European cherry supplies run out.

In line with Turkish cherries, peach and nectarine planted areas have increased with export market investments, along with the growth of the juice industry, which takes up a substantial percentage of stone fruit consumption (20% for peaches), increasing at an annual rate of 6%. Planting of peach and nectarine trees have also been focused on varieties popular in export markets.

Turkish fruits hold competitive advantage with low pricing
Turkey’s top export market for stone fruits, Russia, has increased Turkish stone fruit imports the most over the past year, with growth in value of 44.2% for cherries and 22.9% for nectarines and peaches. Turkey has managed to appeal to consumers worldwide with its attractive prices, an advantage made possible by low labor costs and high supply. Furthermore, Turkey’s currency has been steadily devalued against other currencies. Turkey’s cherry prices in the global market have decreased by 18.9% within the past year, with nectarines and peaches also dropping by 12.6%.

For the full market report by Tridge, please click here.