Carlos Llambrich, of Llamfruit: "It doesn't look like there will be a great cherry production this year"

"The rains have made us lose the earliest cherry varieties"

Rains, frosts and hail have taken a toll in various cherry producing areas of Spain, including Extremadura, Aragon, Valencia, Catalonia and Castile-León. In Fraga, one of the earliest areas in the province of Huesca, constant rains for more than 4 days prior to the harvest have spoiled the extra early varieties. 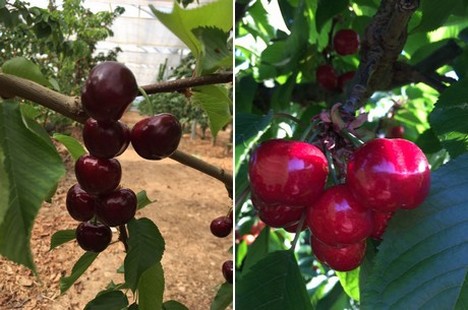 “We have recorded up to 60 liters per square meter on our farms. Due to the moisture, we have lost the entire harvest of the earliest varieties, such as the Nimba, affected by cracking problems,” says Carlos Llambrich, manager of Llamfruit, of Fraga. "We would have started marketing this variety in week 17, but we will have to wait a few days and move on to somewhat less early varieties, of which we have lost around 20% due to cracking (more common in this kind of variety)."

According to the producer and exporter, the flowering was not very good due to excess wind, low temperatures and frequent rains, and this has caused early cherry yields to be generally lower than usual. "There has also been a more limited flowering for mid-season and late cherries, although the volumes of those will be at the right levels. The good side is that there has hardly been any need for thinning, so we have saved on production costs. Moreover, the smaller load on the trees will entail good calibers.”

"Given all the meteorological incidents reported in different Spanish producing areas, as well as in Italy, it doesn't look like this will be a year with great volumes of cherries available. In addition to the rains, the impact of COVID-19 and the consequent lack of workers in the field will make this campaign very challenging. We foresee that we will be short of workers during the peak harvest period, since a lot of labor is needed in a short time and the closing of the borders won't allow the usual foreign workers to arrive,” said Carlos Llambrich.

“Right now, we can see that the market is hungry for cherries, as we are receiving many calls asking us to start shipping the fruit; however, it is still too early to make price balances. In the current context, shaped by the coronavirus, buying trends are changing every day and we don't expect much stability in the markets, with ups and downs in sales,” he said.

Llamfruit's main markets are in Europe, although they seek to continue growing in Asia, where they will make the first shipments of the campaign at the end of next week. “The Asian markets have not fully recovered, but they are gradually opening up. We will see how things develop in the coming days. This year, it is difficult to come up with a strategy for the entire campaign; it will be necessary to go week by week.”

Carlos Llambrich focuses more on sales, while his partner Javier de Pablo is the technical manager of the production. "We hope to reach 2 million kilos of production in the coming years, an amount that has also been set as the limit in order to maintain a good service and high quality standards."