Gauteng’s fresh produce markets, particularly Johannesburg and to a lesser degree Tshwane, are a major supplier of fresh produce to neighbouring countries, particularly on fruit, but they are much quieter than usual and the absence of foreign buyers are hugely affecting sales, traders say. 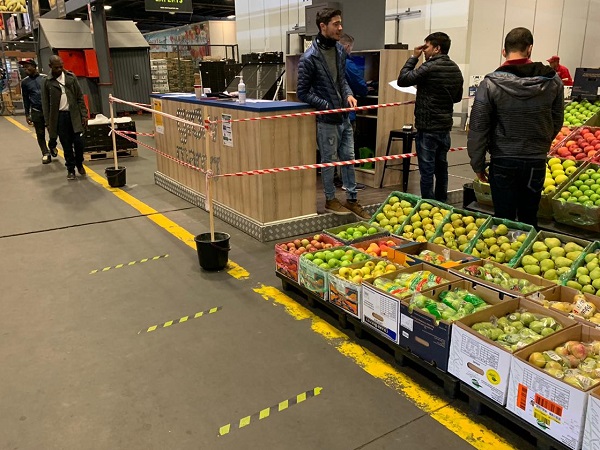 Trading in the time of coronavirus: barrier tape and waiting positions to maintain physical separation (photos supplied by Adrihan Kruger)

South Africa is the only apple producer in the region and the dominant source of citrus but under current regulations cross-border passenger traffic has been suspended, although food transport may continue. Buyers from neighbouring countries like Swaziland, Mozambique and Zambia are mostly absent on the markets.

“Buyers from neighbouring countries usually buy a lot of fruit,” says Adrihan Kruger of Grow Fruit market agency on the Johannesburg market. “There are a lot of challenges for buyers from across the border, but they’re sending trucks and trying to buy by phone.”

Apples and pears are particularly hard hit, with stocks building up. At the moment fruit is regarded as a luxury item.

Theresa Fredericks of DW Fresh market agency on the Johannesburg fresh produce market says that they are selling less than half the amount of apples to buyers from neighbouring countries than before. “Usually we’d be doing close to 200 pallets a week, now it’s 40 or 50.”

FreshPlaza is told of Zambian buyers prepared to pay between R120 and R140 (5.9 to 6.8 euros) for a 15kg carton of oranges. That comes to R9,30 per kilogram, compared to the current South African domestic average price of R5,21 per kilogram for oranges. 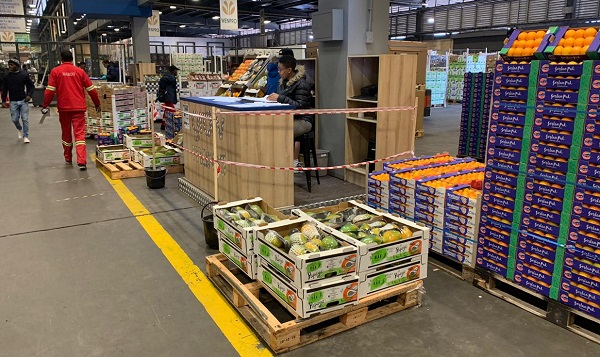 Fresh produce markets in Gauteng are much quieter than usual

The Zambian Business Times reported at the end of March that Lusaka fruit traders were finding it difficult to replenish stock, with orange and banana prices swiftly rising.

The Senwes orange harvest is building up, but for the past two weeks oranges were scarce on the market, says Elfranco Hoogenhout of Farmers’ Trust at the Tshwane market. Due to a very strong export market at the moment, the amount of lemons on the market is reduced but volumes are coming in. Citrus demand is higher than usual, but he’s reticent to attribute it solely to the coronavirus.

At the markets sales of staple vegetables like potatoes, onions, tomatoes are much stronger than fruit. Temperatures have been falling across South Africa, so consumers are turning away from fruit and turning towards vegetables.