For some three weeks now, fresh organic Hokkaido pumpkins from Egypt produced by an organic farm of the Daltex Group, have been arriving in Steinfeld, Bavaria. "Our import volume this year is about 750 tons: For the next growing season -starting in September 2020- there is considerable potential for growth if and when demand is high. If the marketing continues at this rate, the entire tonnage will be sold out by late March/early April," says Georg Thalhammer, major supplier and owner of the company of the same name. The current packing capacity is quite fully utilized, he adds. "But new customers could still join us, we still have a bit of air left." 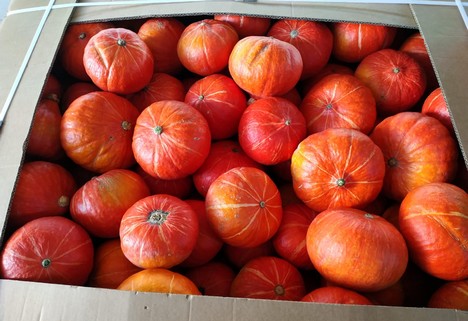 The volumes in the North African growing country have been characterised by strong fluctuations in recent years. At the moment, the producers there seem to have the cultivation under control and stable yields are exported. On the demand side, considerable growth rates can be observed, the specialist dealer and organic pumpkin pioneer of the first hour sees. "Aldi South and North have now completely switched to organic Hokkaido pumpkins. I am convinced that other chains will soon decide in favour of organic Hokkaido in exchange. Hokkaido is predestined for this and the perfect product to act as a stimulus and in the medium term to convert the entire agriculture to organic farming. This would eliminate many problems such as overproduction, soil and groundwater pollution, and provide our grandchildren and future generations with a future worth living. 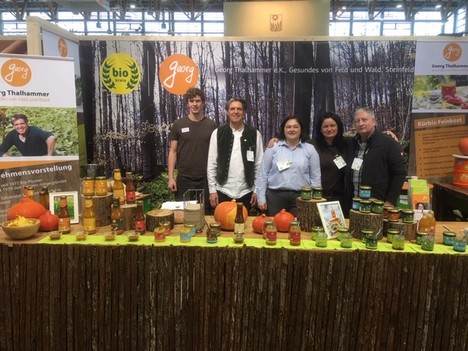 Georg Thalhammer (2nd from left) and team at this year's BioFach in Nuremberg. The Bavarian organic pioneer has always been a regular exhibitor in Nuremberg and has already received several awards for its innovative product concepts. / Picture: Georg Thalhammer e.K.

Supplementary imports from Argentina
In terms of price, Egyptian commercial goods are generally traded at satisfactory prices, similar to the German organic pumpkins of the previous season. Parallel to the deliveries from Egypt, South African batches are also coming onto the market. "In terms of price, both origins are nevertheless within the same range." Nevertheless, the Bavarian major supplier focuses only on batches from Egypt, while smaller quantities are also imported from Argentina. "The first Argentinian shipments are on their way and will soon be available in stores. At the moment the weather is really great because of the cold spell. The media focus on the corona virus also leads to increased sales. Pumpkin is a good emergency stock, storable for weeks,"  Thalhammer said. 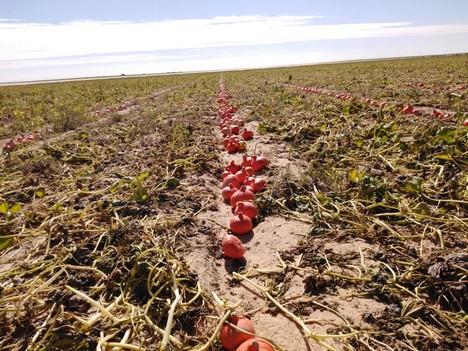 German supply with organic Hokkaido
The domestic supply of organic Hokkaido pumpkins is mainly concentrated in autumn and the first winter months. At the beginning of January this year, the last batches of German grown pumpkins were marketed. "Immediately afterwards we traded Dutch pumpkins in an entertaining way. From the second week of February we switched completely to Egypt", Thalhammer outlined. 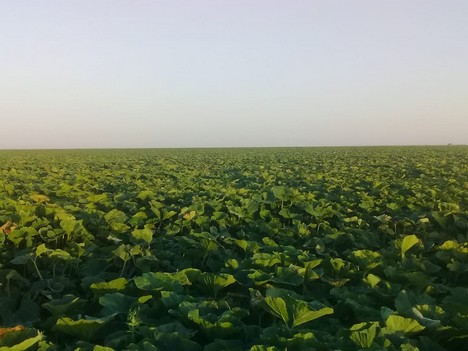 The last Argentinean organic Hokkaido will arrive in Germany by the end of March. In mid/end of April demand usually drops sharply and residual stocks from South Africa and New Zealand, among others, are traded: "From the beginning to mid July we expect the first yields from early growing areas like the Palatinate," Mr. Thalhammer concluded.