Volume on asparagus is building after weather pushed production into a late start.

“Right now asparagus is being grown in northern Mexico—the Sonoran Desert, Caborca, etc. and it got a late start due to cold weather,” says Craig Rolandelli of San Ramon, Ca.-based Jacobs, Malcolm & Burtt (JMB). “Typically, we start early to mid-January and we really didn’t get going until the last week of January.”

Even until late last week, temperatures were still down significantly although production picked back up by the weekend. “In general, it’s going well,” says Rolandelli. “There’s good volume and good production out of Northern Mexico with very high-quality product right now.”

The region generally ships until April and between April and May supplies switch to coming out of Obregón. “We’ll also start shipping California asparagus around the 8th of March though until mid-May,” says Rolandelli. And while Mexico is the dominant shipper of asparagus at this time of year, come April several U.S. and Canadian shipping locations start up and Peru will become the dominant shipper on the East Coast, though Mexico will continue to ship year round. 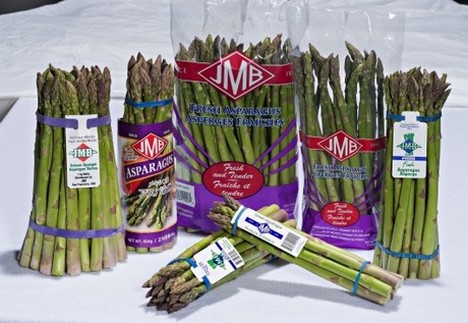 Organic development
Also, this year, Rolandelli notes there’s more organic asparagus available out of Northern Mexico. “There are more growers willing to plant it and grow it,” he says. “I think they figured out how to get their costs under control because organic asparagus traditionally costs a lot more to grow.”

Meanwhile asparagus is coming into a strong demand period. “Starting mid-February or a week before Valentine’s Day through to Easter, demand is high,” says Rolandelli. “It’s the natural harvest cycle for asparagus so it’s when you get the highest quality and most volume of asparagus. Asparagus is also connected with Easter and seen as a late-winter early spring vegetable that people eat so there are a lot of good promotions happening at this time of year.”

As for price, given the volumes coming on, it is dropping somewhat. “Price starts out high in January and it’s dropping down to promotable levels,” says Rolandelli. “Starting this week for Valentine’s, it’ll be at promotable pricing levels through to Easter. Pricing is similar to last year. We started a few weeks late, so we’ve shifted by a few weeks but basically the curve is the same.”