“High-pressure fogging will become the standard in the market”

When Meteor Systems joined the North American market, growing on gutters wasn’t the standard there, but nowadays it is. Since optimizing production efficiency is a key point, more and more techniques are becoming common practice for growers,. To further help growers,  Meteor Systems have teamed up with MJ-Tech to jointly supply high pressure fog systems to the North American market. “We believe this will become a standard in the market as well.” 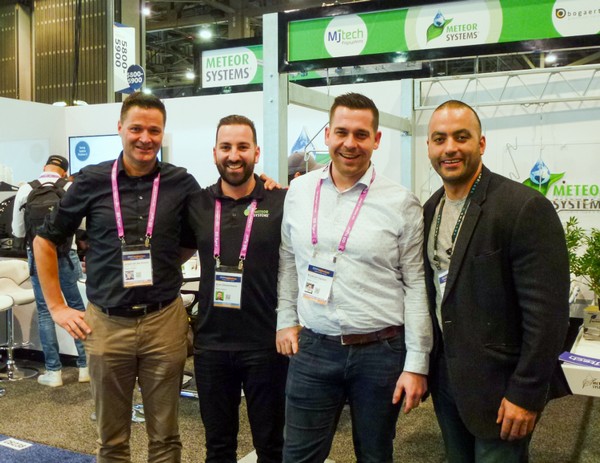 North American market
If you see Ruud van Aperen with MJ-Tech and Freddy Sarkis with Meteor Systems together, it looks like they have worked together for a long time already - and indeed that’s true. The companies jointly helped growers in the expanding North American horticultural industry to improve their business and met up during numerous projects. Meeting each other in the soft fruit market several years ago, they are now serving growers in the vegetable market as well. “What we’ve seen is that our products have become a necessity to growers,” Freddy says. “Growing on gutters, high-tech irrigation systems - there’s no doubt about working with those anymore. Now I believe the same will go for high-pressure fog systems. It will become a standard in the market.”

Thin mist gives better control
By producing a controlled thin mist in the greenhouse, the high-pressure fog systems help growers in various climates. In hot climate conditions it is a tool to cool down the greenhouse. It is also used to have better control over the climate in whatever area you’re growing. Working with a higher relative humidity can also create a more active climate, and even helps growers ventilate less. “Whatever climate you grow in, it is a way to optimise growth”, Ruud summarizes, and Freddy adds that this is what North American growers are looking for. “What we’ve seen is that growers in this market are not afraid to invest since their focus is mainly on the final ROI of their investment. That’s why we have worked with MJ-Tech on various projects.”

Since they kept meeting up, the companies decided to investigate the possibility to work together. “What we recognized in Meteor is the focus on quality and the strong relationships they build with their partners”, Ruud says. “From their North American office they have the possibility to provide high level after-sales and service, and they’re known to take good care of that as well. Collaborating in the North American market is a strategic move.”