The Franschhoek Valley is South Africa’s premier plum production area, and while the plum volumes handled by Franschhoek-based Freshness First have decreased the past three season due to difficult weather conditions, Jan Hoon, marketing manager of the company, foresees that it will always remain an important part of their business. 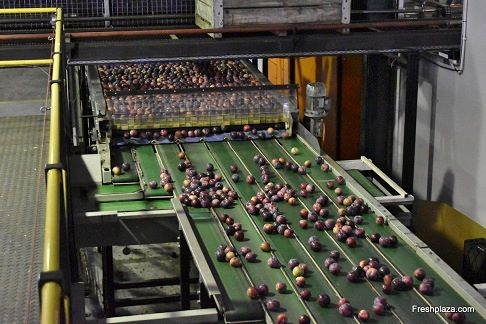 Plums moving across the packline

Freshness First markets stonefruit (plums making up roughly half of the current volumes), soft citrus and lemons, persimmons and pomegranates (the latter becoming more difficult due to competition from Peru).

In the Klein Karoo area there has been a move away from fruit canning and wine grapes in favour of a bigger focus on fresh export commodities. The planted hectares has remained stable but tonnages per hectare have increased with new varieties.

“Both Franschhoek Valley and Klein Karoo are fantastic plums producing areas, where each have their specific varieties suited to the climatic conditions. Good yields per hectare remain the most imported factor for survival, “Jan says, but noting: “There’s a lot of pressure from market to produce better eating varieties. Therefore we place our target more on the red-fleshed varieties.” 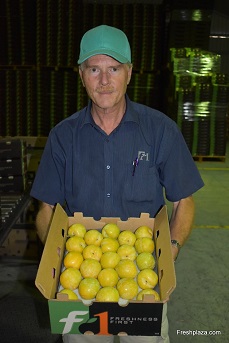 They believe in a balanced mix between the ‘bankers’, the stable earners that form the backbone of the farm’s plum production, while also responding to market trends with newer niche and higher-risk varieties.

Charl Stander, Freshness First’s head of technical and quality control (right with a box of plums), says that growers weigh up the quality and adaptability of trees when choosing varieties.

“It’s not always the case that the best price equals the highest net farming income. If you compare varieties on which you obtain average prices but with yields of 40t/ha, coupled with no quality claims and no trees dying, no internal disorders and no cracks, you’re better off than with special varieties with a very high price that have yields of 20t/ha and high royalties and the risk of claims. It’s a balance that our growers have to strike.”

Peak plum season has shifted towards mid and late varieties
In Western Europe at least 80% of Franschhoek Marketing’s volumes go into retail programmes, a little bit for the free market, while servicing smaller traders to supply the smaller chains in Eastern European countries. “The Middle East is a different story. We do a lot of trading with a single client throughout the region. The Far East works like that as well. The future in Europe is shelf space. Every year we see a bigger difference between retail and wholesale price levels. In the past you could sometimes get higher income on the wholesale market but currently there’s a big gap, especially on out-of-season products. You’re either at a retailer at a decent price or you get killed at wholesale.”

The world has changed since twenty years ago, when European traders would be waiting with bated breath for South African stonefruit to arrive. “In the past there were very good pre-Christmas plum sales, now we find that buyers take fewer fruit to make space for promotions on European fruit. We’re trying to send more in-season fruit, unlike in the past.”

Charl adds that they’ve seen a shift away from early varieties to more mid- and late season varieties, as reflected in the newest varieties, from January until the start of the Northern summer. “Our main plum shipments now peak during the second or third week of January, fruit that will arrive end January onwards in Europe.” Their first plums are sent by week 46.

Another difference has been a growing aversion to plastic packaging, a trend they welcome, and in plums, particularly to Germany, this has manifested itself in fewer pre-packed small fruit and rather larger fruit in paper trays for loose sales. Charl refers to the industry’s plastic packaging working group that is continually looking for packaging solutions that employ less plastic. He also notes that more than 50% of the plastic used by them fall into the green category in Europe.

Experimental planting on Rojo Brilliante persimmons
The persimmons industry in South Africa is going through a difficult time, because hectares are decreasing and there are almost no trees available. The net farm income on persimmons are currently one of the worst in the fruit industry. “In Europe there’s been a big move away from Sharon fruit, the Triumph variety, with a big preference for the Spanish Rojo Brilliante persimmon.”

His colleague adds: “There’s more demand for it, primarily because of its appearance, but we believe the Sharon fruit has a better shelf life and taste.”

They started planting Rojo Brilliante two year ago, but had difficulties with Lotus rootstock seed imported from Spain. Its germination was less than 10%. Trials are currently being done to graft it onto Virginiana rootstock which is used for Triumph. 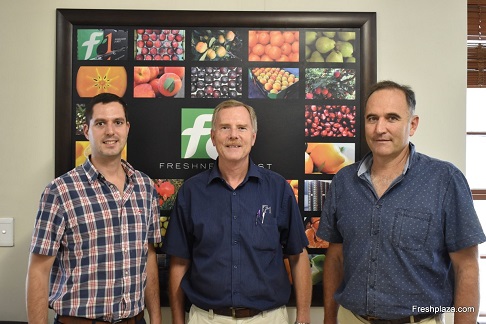 Easy peelers and lemons
The production of soft citrus and lemon, mainly produced in the Klein Karoo, has increased in the past few years. It is currently making up for 50% of their total production. Lemons especially have done very well over the past few years delivering record prices. “With a big increase in production from both the Northern and Southern hemispheres, we expect prices to become more and more under pressure,” says Jan.

They market the Tango mandarin and older varieties like Clemenules and Miho Wase Satsumas. “Currently almost all mandarins grown in South Africa are under licence and in my opinion there’s not a big difference between them in terms of price and eating quality,” says Jan. “There are no licence-free, productive mandarins available to South African growers at the moment.”

Restraints on market access
In South Africa, the fruit industry looks after themselves to a very large degree, but at a certain point their hands are tied. “On bilateral issues, where we as industry can’t do anything, we’d like to see more driven management from government to open markets. Pears, for instance, have been waiting for a long time to be considered for Chinese access. The stonefruit category is also in line for China but we don’t know whether that is going to include all stonefruit categories, or just some, like in the case of pomefruit which only included apples and excluded pears. Those kinds of things we’d like to see resolved.”