Japan (128 million inhabitants) is the fourth largest market for American exporters of food and agricultural products. The United States exported 12.9 billion dollars (11.6 billion euros) of horticultural products to Japan in 2018. There are many opportunities for exporters who are willing and able to follow strict Japanese product regulations and keep up with the latest trends in this market. The American market is favoured by the American-Japanese free trade agreement. This treaty entered into force on 1 January 2020 and stipulates that nearly 90% of US food and horticultural imports into Japan are either duty-free or enjoy preferential rates.

Fruit import
Japan imports a third of its fruit, with the United States taking second place among exporters. The United States is the main supplier of oranges, lemons, grapes and cherries. The chances for fruit exports to Japan are expected to increase due to the decline in domestic cultivation in Japan due to the aging of fruit growers. 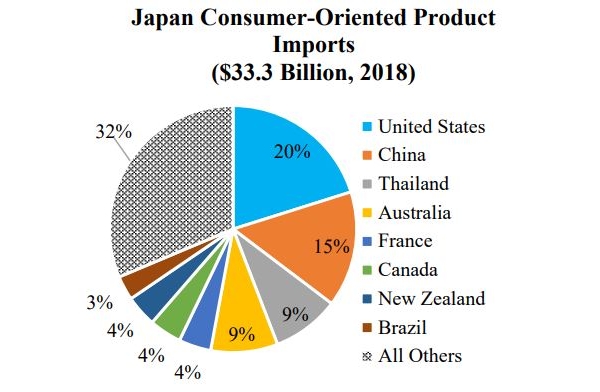 Focus on functional and healthy food
The Japanese consumer is generally very aware of his health. The Japanese food and beverage market continues to focus on functional, healthy and nutritious products. Everything that is seen as a health and beauty benefit has a stronger appeal and a greater chance of becoming popular, especially with women. Healthy food trends from the US also have some influence, with special diets and trendy superfoods that are often also popular on the Japanese market. Nuts and peanuts in particular are growing markets. Japanese consumers are also brand sensitive.

Population decline and aging
Due to a fall in the birth rate, the number of inhabitants is decreasing and the population is gradually aging. In 2018, the number of people aged 65 or over was the highest since 1950, with 28.1%. In 2018, the average Japanese life expectancy for women was 87 years and 81 years for men. Retired people usually have a lot of savings and an active lifestyle. The aging population is expected to increase. Although there is considerable concern about the impact of aging and the declining population on society in general and the demand for food in particular, overall demand for food remains strong and the market continues to offer great opportunities for individual exporters. The demand for high-quality food is expected to increase in the future.

More information about exporting to Japan can be found in the USDA report.