Pinduoduo, which was founded in 2015, has quickly become the second-largest e-commerce platform in China thanks to its innovative group purchasing model. Currently, it has 536.3 million active users and 3.6 million merchants. Fruits are one of the most popular products sold on the platform.

According to Pinduodo, so far in the 2019-2020 season, sales of Chilean cherries have increased by 230% when compared to the same period last year. The platform also stated that they expected to have more than 1 million orders of Chilean cherries for the Chinese New Year Shopping Festival. 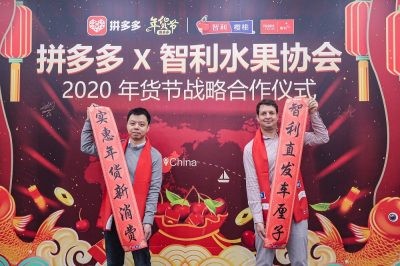 In addition, Pinduoduo will use an “RMB 10 Billion Rebate” program for purchases of Chilean cherries, which will allow more consumers to enjoy high quality imported cherries at reasonable prices.

According to data from Pinduoduo, orders for Chilean cherries this year continue to be concentrated in rich coastal areas such as Shanghai, Beijing, Canton, and the Yangtze and Pearl River deltas. However, the growth rate of consumption in third level cities and rural areas is higher than in the first and second level cities, which represents a reduction in the traditionally large consumption gap between urban and rural areas.

This Chinese e-commerce company also stated that some of its merchants have begun to accelerate their supply chain through direct purchases. Once the Chilean cherries are shipped to Hong Kong and cleared by customs in Shenzhen, they are directly sent to a facility in Foshan, where they are classified and repackaged, omitting traditional wholesale markets. As a result, Chilean cherries can reach the consumer's door in just three days after going through customs.

Pinduoduo orders show that consumers in Chinese markets with greater growth potential prefer to buy their cherries in 2 to 4 kilograms presentations. This finding has led Pinduoduo to propose to ASOEX changing the large packaging units they use to export cherries to smaller consumer containers. This could allow delivering the cherries to Chinese consumers in their original packaging, without having to repack them in China.